The fist factor that important in the pricing decision of iPhone 5C is by considering costs. For instance, since Apple Inc. wants to maximize its profits through establishing new products, the price should be set at the point where marginal revenue equals to marginal cost. We know that iPhone 5C is in the perfectly competitive market, the company can reach its maximum profit at equilibrium at X* and P*. To determine the price, Apple Inc. needs to do the marginal analysis.

According to profits (π) equals to total revenues (TR) minus total costs (TC), which is π=(P*X)-(fixed cost+variable costs per unit *X), X is the number of units sold by Apple Inc. Of course, manager needs to ask several departments and contractors to know the cost of their product and services. From online websites, I get to know that producing a 16Gbyte iPhone, total BOM and Manufacturing Cost is about $173.45, for a 32Gbyte iPhone 5C is approximately $182.85(which accounts only for hardware and manufacturing costs and does not include other expenses such as software, licensing, royalties or other expenditure)(Andrew, 2013).

So, managers usually try to combine cost-based approaches and market-based approach to make a profit satisfying approach, for example full cost-plus target profits, variable costs-plus percentage markup can both assess to pricing decision. However, the common and basic factor for the methods is costs.

The second factor that important in the pricing decision of iPhone 5C is product line and competitors. Strategy analysis is the company needs to consider about the Competitors as well as the whole industry, and then assess to firm’s plan. We can figure out that the competitions in the smartphone market are quite intense, there are numerous competitors and are almost equal size, such as Samsung, Microsoft. So, Apple Inc. has to investigate the cost leadership and the unique producers in order to make a competitive price in the smartphone market.

The website take the example of Moto X, which has 18 kinds of colors and the functions are really similar to iPhone 5C (Darren, 2013). The price of Moto X is $599, so the manager should decide a lower price than it to gain a competitive advantage. In particular, the competition is not just from the external market, we know that Apple Inc. promoted iPhone 5C as well as iPhone 5S at the same time. To iPhone 5C, the manager needs to consider about the plastic case, which is $42 less than the metal case cost of iPhone5S (Ben, 2013). So manager should also compare the 5C’s price to 5S. It is an important thing to keep secret of the product’s price before they coming out.

The manager of Apple Inc. can survey the expected price of the public, or conduct some historical sample tests before making the final price decision. The third factor that important in the pricing decision of iPhone 5C is the manager should estimate the demand. Assume that we are suffering a financial crisis, most people don’t have extra money to pay for new electronic devices. They have already owned iPhone 5 or iPhone 4S and do not want to pay for another similar product.

Then the manager should decrease the price of iPhone 5C to fit for people’s expectation of low pricing, using the profit margin per unit to trade for higher quantities. As I mentioned above, the estimation of demand function is also important in the marginal analysis. In order to estimate the demand, the manager should also make market survey to analyze the targeted customers. According to Pew Internet’s report, Teens and Technology 2013, 37% of U.S. teenagers now own a smartphone (which compares to 23% in 2011).

And the increases of U.S. wireless carriers’ family data plans, intensive the parents to buy smartphones for their kids (Jason, 2013). Because the iPhone5C is colorful, has proper functions and easy to control, it must a first-choice for kid’s cellphone. Aimed at attracting teenagers group, the Apple Inc. manager should make the price to a certain level. What’s more, we also have to consider whether buyers are sensitive to price. In economics, we call it price elasticity of demand, which means the percentage change in the numbers of units sod to the percentage change in the price of the product.

Assume most people are price sensitive, if the price of iphone5C is much higher than they expected, they will not buy it, which decreases demand a lot. So, listen to the public opinions on price is quite important. Before iphone5C facing to the public, a lot of individuals forecast that the selling price should be low enough to satisfy the low-end customers needs. Somebody was kidding that iPhone 5C is iPhone for China or iPhone for cheap.

Apple Inc. wants to occupy more market percentage in developing countries, so they advertised that to make a colorful low-end smartphone. However, the price of iPhone 5C is not as low as we expected. The data shows after releasing the iPhone for 72 hours, both in China, Australia, U.S., the sales of iPhone 5S is almost 4 times compare to iPhone 5C. Especially, the graph says in the “target” country China, where the 5s is outselling the 5c five to one (Christopher, 2013). So I think the price of iPhone 5C is not reasonable. There are several reasons to explain iPhone 5C price is not appropriate.

Firstly, compare to iPhone 5S, people claim 5C just looks an iPhone 5 with a candy-colored plastic shell. According to a report published by UBS, the same memory for 16 Gigabyte iPhone, 5S costs $213 in materials, whereas a 5C costs $156IPhone 5S has metal shell, Touch ID fingerprint scanner, more advanced A7 chipset, Motion Coprocessor and True tone flash for camera. The different price due to plastic case of $42 and finger print sensor of $7.

However, the price of iPhone 5C is only $100 less than iPhone 5S. The UBS also estimates the gross margins of iPhone 5S is 45-55% and for iPhone 5S is 48-54% (Ben, 2013). As a rational consumer, I will buy iPhone 5S instead of iPhone 5C, since 5S has much more functions, which is not at a so much higher price. Secondly, the factors of competitor also have huge effects. Samsung is the key part for apple to make its “retina display” screen, as well as apple use Sony’s sensor in its camera. We know that Samsung and Sony are competitors. Apple Inc. is hiring, relying and paying them.

But if someday, Samsung or Sony stop providing essential parts to apple, what will happen? I think Apple Inc. has to produce all manufacturing parts by themselves under a big amount of fixed cost, which will have a big effect on Apple’s price decision. Thirdly, the price of iPhone 5C is not as low as rumored. It brings the question to us, who exactly is Apple targeting? We know that Samsung has galaxy series, which with large-screen and liked by fashion people and developing markets.

In china, there are a lot of really cheap phones under 1000RMB, those phones have varieties function and beautiful looking. So when Apple Inc. can really open the market to low-end customers? The price decision and targeting customer is not clear and accurate. I am kind of thinking there must be some sailing strategy when apple promoted 5C and 5S at the same time, with a huge cost performance in my opinion. Maybe Apple Inc. just wants to stimulate the
sales of 5S, after people comparing these two products. 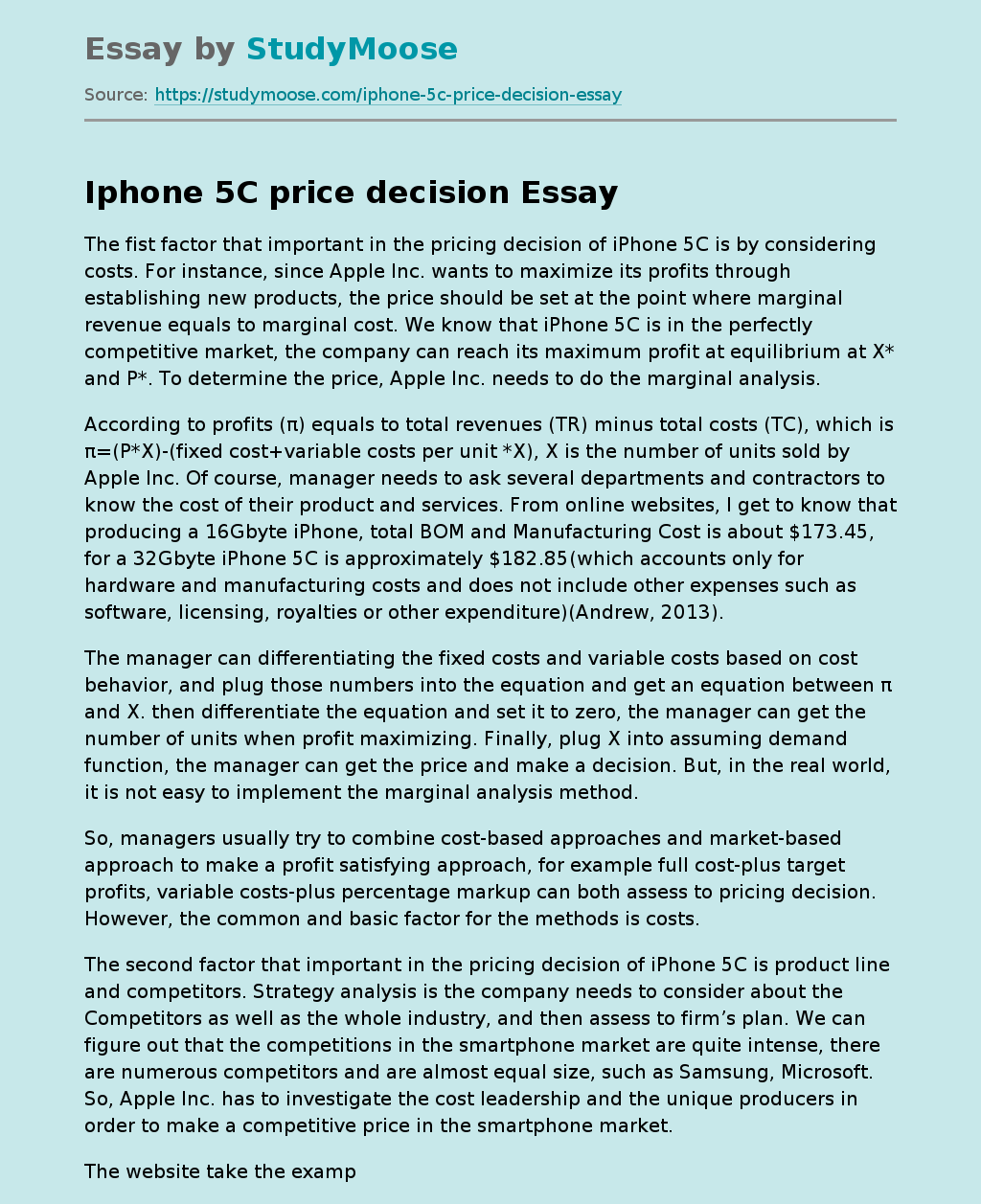