Interracial marriage is used to describe marriages that take place between people who are from different racial or ethnic groups.

Don't use plagiarized sources.
Get Your Custom Essay on Interracial Marriage Just from $13,9/Page

Interracial Marriages Hits a New High For most of U. S history, in most communities, such unions were taboo. Interracial marriage approval is at a high point in the United States at 86 percent, a Gallup poll indicated. The poll of 1,319 adults found the United States is on the verge of unanimity on the topic of interracial marriage, Gallup reported. Ninety-six percent of African-Americans, who have always been more approving of marriage between blacks’ whites, approve of such unions, while 84 percent of whites approve.

The gap of approval ratings between blacks and whites has narrowed considerably. The gap since 1997 has been averaging 13 percentage points. From 1968 to 1994, the average gap was 32 points. When Gallup first asked about interracial marriage in 1958, only 4 percent of those asked approved. Approval of black-white marriages is slightly lower among Southerners, Republicans, conservatives and those in lower education levels. The elderly are the least approving group at 66 percent (UPI. com, 2011). Interracial Marriages and the Effect on Children

No matter what ethnic groups are involved, one major result of these marriages are children. Children are far more negative than a lot of adults are today regarding interracial relationships. It’s not that they approve or disapprove; it’s more like they don’t understand. If a child has never been exposed to other races or seen two different races married and living together than their first reaction might be to think its “weird”. When kids don’t understand something their first reaction is to tease the child with the interracial parents.

There are more serious effects of a child being interracial … labeling and racism. Encountering an identity crisis, which group does she/he belong to? Having siblings that can actually pass as white, who may result in receiving privileges that society may deny the child of more color (darker). Acceptance of Interracial Marriage The willingness of people entering into interracial relationships has grown and so does acceptance. There still some that frown upon mixed marriages with the belief that marriage is tough enough without having to deal with the burden racial differences.

A report released by the Pew Research Center says that 43 percent of Americans believe that marriage between people of different races has been productive in our society while only 10 percent believe it has changed America for the worse (AFRO. com, 2012). Difficulties and Challenges of Interracial Marriage As an interracial couple you will possibly face extra challenges in your marriage from people outside your marriage. These include antagonistic and unfair treatment from others, suffering rejection from family members or disinheritance, and dealing with prejudices from friends.

All of these things combined can push a couple into social segregation. If you or a couple you know is dealing with these kinds of things (even same-race couples do), think about the following: Have confidence in your choice; Deal with your feelings; Stand up for each other and your marriage; Surround yourselves with supportive people. What can cause an interracial marriage to fall apart is the inability of a couple to handle their differences and a failure to talk about stress and prejudice created by others (Marriage Matters, 2009).

You can’t help with whom you fall in love with, and people should stop seeing mixed race relationships as a political statement. If people attempt to understand the different beliefs, traditions and values of the diverse groups that make up this world, then they could work together for the good of all. Love has no color! Interracial marriage in the United States has been fully legal in all U. S. states since the 1967 Supreme Court decision that deemed anti-miscegenation laws unconstitutional, with many states choosing to legalize interracial marriage at much earlier dates.

The United States has many ethnic and racial groups and interracial marriage is fairly common among most of them (The Full Wiki, n. d. ). In conclusion ethnic groups bring diversity and wealth to a society by introducing their own ideas and customs. Interracial marriages introduce such variety. In a picture-perfect world, everyone should celebrate this. However, the world is not perfect. I think that the more love there is in this world, the better off we all are… regardless of whom it is we love. 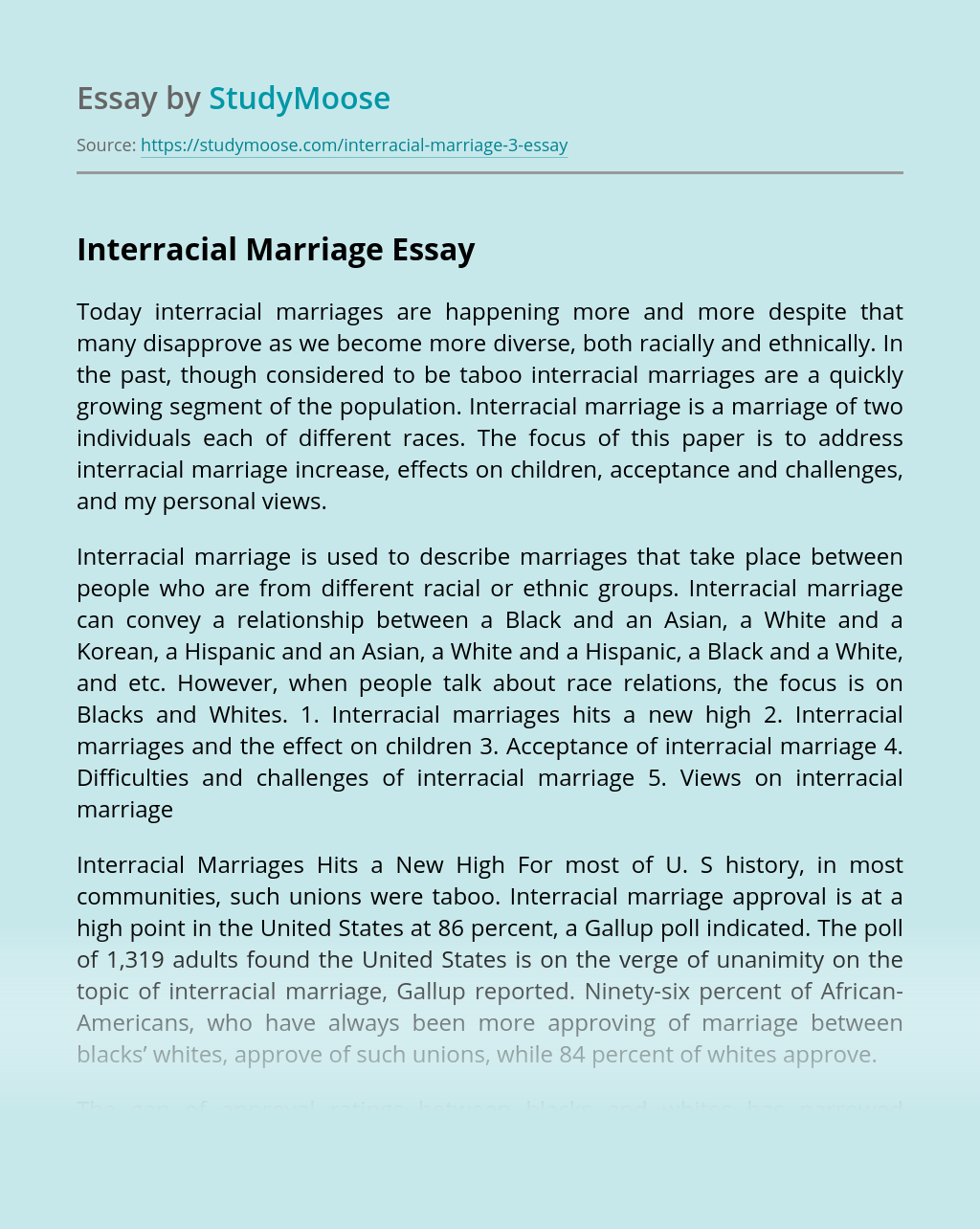 ﻿Advantages and Disadvantages of Having a Big Family

Nowadays more and more people tend to have only one child or not to have children at all. The reasons are different: some of them want to have more time to themselves, some want to get to the top in their career and some just don’t want to have such a big responsibility. Either big... VIEW ESSAY

In the United States, the standard western wedding event custom is the bride-to-be generally wears a white dress and a veil to cover her face. She brings an arrangement of flowers and normally has something old (like a grandmas necklace) something new (her gown) something borrowed (jewlery or a handkerchief) and something blue (a garter... VIEW ESSAY

I. Introduction A. what is divorce? B. reasons of divorce Thesis Statement: Divorce should not be legalized in the Philippines because it is a long dangerous process, detrimental to the children, and will start custody battle. II. Body A. Divorce is a long and dangerous process Counter argument: the divorce process will benefit freedom from... VIEW ESSAY

View sample
Document Analysis The Marriage of the Virgin

This essay is a literary analysis of the play Romeo and Juliet. Its format is Point, Proof and Explanation. The question was “What factors and/or characters lead to the eventual demise of Romeo and Juliet” I used the characters of Lady and Lord Capulet, Juliets Nurse, and Friar Laurence. There are direct quotes from the... VIEW ESSAY