Instagram is one of the top social media sites used by people to connect with others and express themselves. With this being the sole purpose of this social media platform Instagram is being used for different things that they did not realize would be harmful such as, Cyberbullying, Catfishing, and source of misleading information.

To begin with, “Catfishing” has become more evident in the past ten years. For people who don’t know according to the Marriam-Webster Dictionary the definition of a catfish is “a person who sets up a false personal profile on a social networking site for fraudulent or deceptive purposes” What this means is that anyone who creates a social media account portraying to be someone they are not is a Catfish.

Don't use plagiarized sources. Get your custom essay on
“ Instagram: What Wasn’t Expected ”
Get custom paper
NEW! smart matching with writer

People have many different motives to why they catfish other people. According to an article written by Radhika Sanghan three Chechen girls managed to catfish an Islamic terrorist group and ran off with three-thousand dollars by simply creating a fake account promising the group that they would be their “jihadi brides” and that they would use the money to move over to Syria.

Even though they used social media to catfish, lie, and steal Catfishing had been used in positive ways also. Dateline NBC Produced a series in 2004 called “to catch a predator” which was a reality show where undercover detectives create false social media account portraying younger girls (usually 12-16) as bait to catch male adults who contacted them over the Internet for sexual Interaction.

Those men were then greeted at the meetup location by a camera crew and a set of handcuffs. Catfishing became such a big deal that MTV went out and produced a whole tv series about it. The whole show started when the filmmaker Nev Schulman discovers that the woman with whom he’d been carrying on an online relationship had not been totally honest in describing herself. Because of what happened to him Nev Schulman and Max Joseph partnered up with MTV to help people who are emotionally entangled with someone they have never met in real life.

Each Episode contains a different person who wants to find out if the person they have been having their online relationship with is lying or telling the truth. Schulman and Joseph travel wherever they need to go to meet up with the client and help them get to the truth behind the story. Schulman does the necessary research to determine the identity of their lover. By the end of the show Schulman puts you face to face with the person you were communicating with and you find out whether or no that person was telling the truth about their identity or if they were in fact lying and catfishing the client. Instagram unknowingly opened the doors to catfishing by helping allow access to people pictures which in some cases are taken and used by other people to catfish others. There are Multiple catfish incidents reported to Instagram simply of people impersonating their accounts and trying to use their identity for some type of personal gain.

Secondly, After Instagram was created the cyberbullying rate jumped. According to an article posted on a federal government website managed by the U.S. Department of Health and Human Services “Cyberbullying is bullying that takes place over digital devices like cell phones, computers, and tablets. Cyberbullying includes sending, posting, or sharing negative, harmful, false, or mean content about someone else.” Which means any person who uses a device to spread false, harmful, or negative content about someone else with Negative intentions is considered a cyberbully. The most common places where cyberbullying occurs are: Social Media, such as Facebook, Instagram, Snapchat, and Twitter.

According to an article written By Jane Wakefield “Forty per cent said they felt bad if nobody liked their selfies and 35% said their confidence was directly linked to the number of followers they had.” Meaning that Instagram made people value others opinion so much that it affected people’s confidence level and self- esteem. The study, of more than 10,000 young people ages 12 to 20, recommended that Cyberbullying is boundless, with about 70% of youths confessing to being damaging towards someone else on the web and 17% professing to have been harassed on the web. One of every three said they lived in dread of cyberbullying, with appearance referred to as the most common picked on thing. About half (47%) said they wouldn’t talk about awful things in their lives via social media outlets like Instagram and many offers just a better version of their lives.

Some cases are very severe and lead to leaving kids suicidal or pushed to the point of committing suicide. According to an article written by James Tozer, A respectable young lady aged at only ten years old crumbled in tears after hearing about a survey that was made on her behalf asking people whether she was ugly or not. When asked “‘Who thinks she ugly’, 53 % responded ‘Hell ya’.” Mia-Lili’s mother, Corrinia, 33, says the situation has left her daughter suicidal. She also stated that Mia-Lili had previously endured such serious bullying that the family had to move away and into a different house. The survey that was made by the trolls had such a big effect on her that her parents had put Mia-Lili on suicide watch because “the trolls’ survey made her want to ‘end it all’.”

Despite the news they post being misleading they received 3.5 Million engagements in February of 2018. Your Newswire’s substance has a couple of qualities that make it spread like out of control fire: Not in every case does the information seem false at first look, and the other way that helps misleading news spread fast is when it Confirms fears or conspiracies that readers might already worry about such as: child abuse and the Catholic Church, a flu shot making people sick, secret government plots. Instagram plays the part in distributing and sharing the fake news without that being their intentional goal and that misleading information is playing an effect on younger people because studies show that they rely more on new from social media then regular media outlets such as : Newscast, Newspaper, Actual articles, and Radio broadcast.

In Conclusion, Even though when instagram was created its main goal was to allow people to connect with each other and share pictures and videos with friends and family is has come with a consequences that were unintentional. 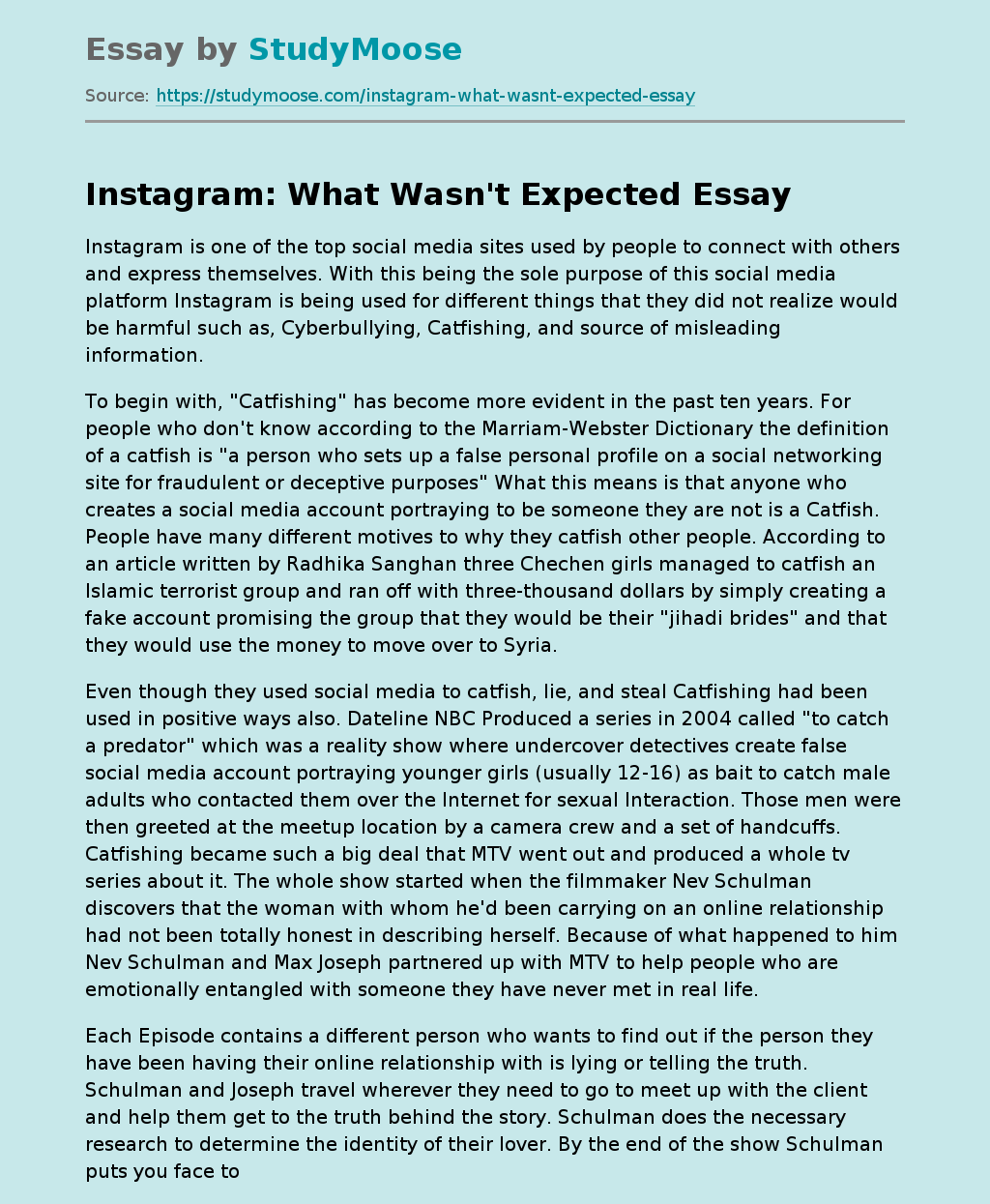