Injustice anywhere is a threat to justice everywhere

Injustice refers to either the absence or the exact opposite of justice. The term is applied either in reference to a particular event or even a larger incident. Injustice throughout society today is heard a lot about. People hear about major injustices all the time especially now media access is a lot easier. Many people can also come together and confront one another to either support or contradict these transgressions. This can also be contemplated throughout innumerable historical events and even ones that encourage Martin Luther King Jr.

Don't use plagiarized sources. Get your custom essay on
“ Injustice anywhere is a threat to justice everywhere ”
Get custom paper
NEW! smart matching with writer

’s proclamation that any place with injustice means it is a portent everywhere else.

Children both men and women are held in slavery over the course of the entire trans-Atlantic slave trade. The National Underground Railroad Network to Freedom Act of 1988 directed the National Park Service to commemorate and honor the history of the Underground Railroad. The Underground Railroad was the resistance to enslavement through escapes and flights throughout the Civil War. It also referred to the efforts of enslaved African Americans to gain their equality by escaping bondage.

Wherever slavery existed, there was some sort of effort in escaping.

While most completed their journey of escaping unassisted, each subsequent decade in which slavery was legal in the United States saw an accumulation in active efforts to reinforce these escapes. The decision to assist a freedom seeker was quite an experience. However, in other places, particularly after the Fugitive Slave Act of 1850, the Underground Railroad was surprisingly organized and even deliberate; seekers spread out into different directions to discuss the important movement in American History as an examination of the areas in which people were enslaved.

The power of the word “injustice” results in many people abusing it and trying to apply it to situations where uninformed people will react by taking their side of the altercation. In the short passage “Protecting Freedom of Expression on the Campus”, Derek Bok discusses the problem of attempting to reconcile the rights of free speech along with the desire to avoid racial tension. Derek begins his explanation by using two of his students, one who hung up a confederate flag in public view in Harvard along with having one who protested that same situation by hanging swastika. Oppositions may state that anything that may have been a threat or harm to human life should definitely contain limitations and restrictions. Bok stated how extraordinary perspectives argued by various student groups on the campus were also adding on to express how unique student groups suggested revolving this issue that Bok continued to explain the certain campuses resolving around similar dissensions.

A nation where most citizens are free to choose their careers, their homes and jobs can be both profitable and content. Having freedom being given freely to the oppressed which means they must fight for their own rights. Most of the time an oppressor benefits from its oppression and the oppressed has to be the first one to set an example of a better situation and then beginning the process of releasing the continuity of oppression. At any rate, it may not be the freedom that “freedom isn’t free” but it definitely is the basis for it. There is freedom in both social and political senses especially when others abstain from interfering with certain activities that they attend.

Freedom in the sense of the inborn capacity to act as people rather than machine figures portray the fact that freedom is free. And that people’s obligations are mostly under a negative connotation rather than a positive connotation in respect to emancipation. In the book, “The System of Liberty: Themes in the History of Classical Liberalism” by George H. Smith, he discusses the difference between the positive and negative freedom as a huge part of the division between the “old liberals.” And how the newer liberal comprehension of freedom would require people to do more work instead of initiating force against others because newer liberal-T.H. Green believed that nobody could be free who lacked certain materials.

And in order for them all to be free, everybody would be required to submit to the states demands in the variety forms of taxations and regulations of consensual negotiations. However, oppositions may state that protecting one’s negative social freedom requires usage of scarce resources and in that sense, freedom is not free. Because liberals have spent a decent amount of time proving that new liberalism is founded on a contradiction, that the freedom of one postulates aggressive force upon one another because freedom cannot directly be accustomed; therefore, resulting in people having to work for their liberties.

Freedom is not to be given freely because the rights that are already given to us are both significant and immeasurable. In the novel, “To Kill a Mockingbird” by Harper Lee, Atticus is appointed by the court to defend Tom Robinson-an African American who had been accused of raping a young White woman. Even though many of Maycomb’s citizens disapproved, Atticus continued to defend Tom. And that resulted in having other children taunt two children Jem and Scout by calling them a “nigger” for the actions that they have made. Scout was tempted to stand up for his father’s honor by fighting even though Scout’s father told her not to.

It was also not the proper way to deal with a situation like this so her father did not want his daughter to get into trouble even though she was not treated as an equal. Though others may disagree and state that it was completely Scout’s fathers’ decision to defend the African American, he deserved the decision he made. Scout’s father stood up for Tom Robinson because he knew that he was innocent and he did what he believed was right. And in the end, Tom Robinson gained his freedom by trying to escape from prison because he knew he did not belong there and ended up getting shot. That was his definition of gaining his freedom and it was definitely not free since he practically sacrificed his life.

Injustice anywhere is a threat to justice everywhere. (2016, Apr 30). Retrieved from https://studymoose.com/injustice-anywhere-is-a-threat-to-justice-everywhere-essay?post 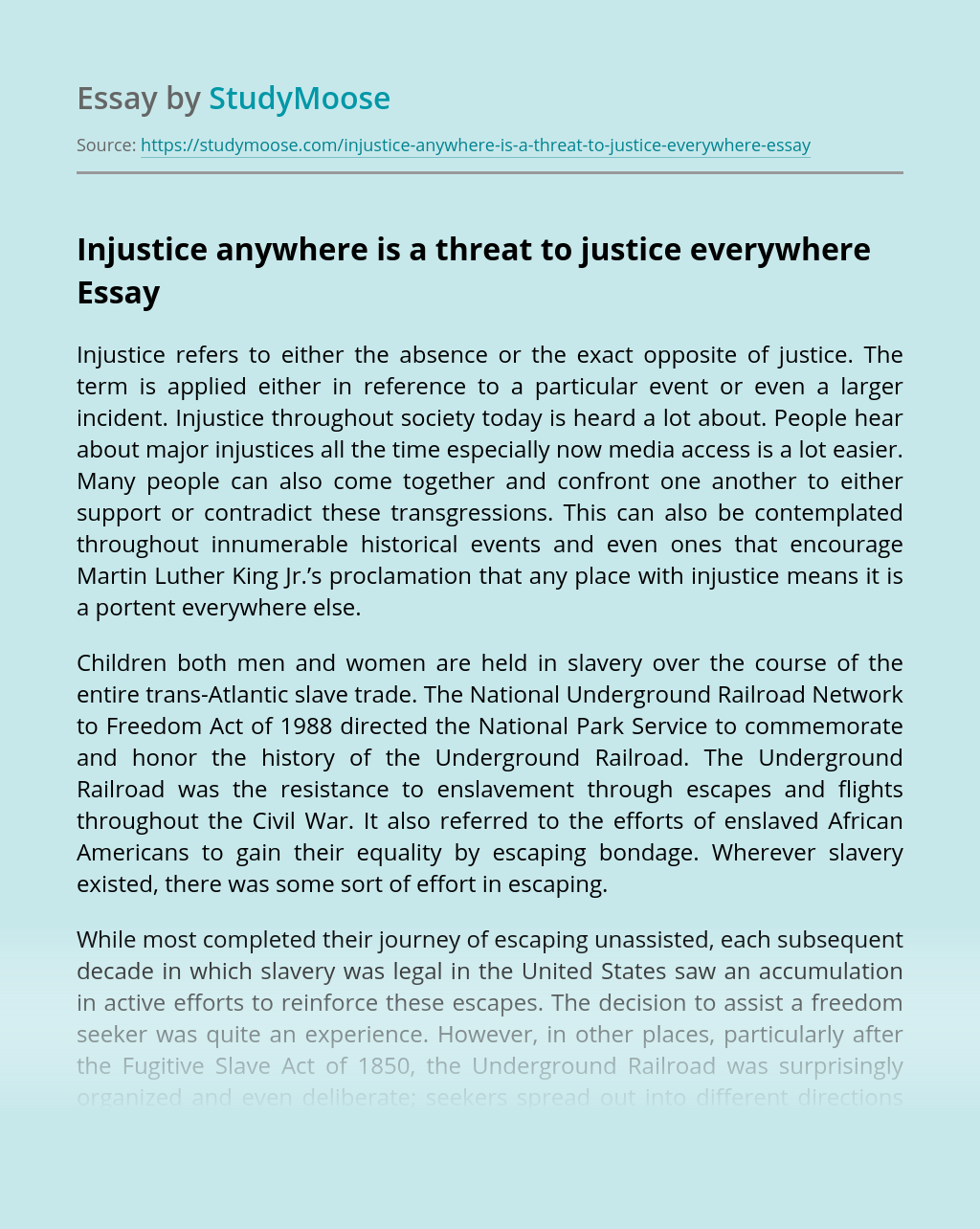