The movie “Real Women Have Curves,” by Patricia Cardoso addresses the different aspects of culture. In the movie, Ana Garcia is caught in between two very different cultures. With the two cultures at different ends of the spectrum, and the inner turmoil that goes along with it; Ana must figure out how to navigate both cultures without losing the bonds that she has with her family. The film begins by drawing the line between the two different cultures. With Ana getting ready for her last day of school, she was reminded by her ailing mother that women should prepare breakfast for the men.

Ana ignores her mother’s wishes, and goes about her morning. Even though Ana lives in an “old school” household, it was apparent to me that she has mostly adopted the mainstream culture that she’s exposed to outside her home. The director did a wonderful job in showing ethnocentrism in both cultures. Ana is exposed to both her family’s traditional Latino culture, as well as the culture she’s familiar with outside of home; yet she shows her ethnocentrism towards her family’s “old school” ways.

For example, she criticized the sweatshop conditions that her sister and mother work in.

Ana’s mother and Estella were raised in a culture where toil and hard labor was the norm. Ana was also quick to judge of her mother’s beliefs in beauty, marriage, and sex. Senora Garcia is also a great example of ethnocentrism. Unlike Ana, Senora Garcia was raised in one culture her whole life, and is firm on her beliefs.

She imposes on the ideas to Ana that a woman’s role is to be submissive, conservative, and take care of homely affairs. She also made it clear to Ana that her role as a mother gives her the right to decide which man is right for her daughter for a possible suitor.

Their differences in culture and the constant arguments that take between them shows their ethnocentricity towards each other. Senora Garcia’s cultural norm was challenged when the women in the factory decided it was acceptable to be comfortable with their curvy figure. The women depicted in the scene also came from the same cultural background as Senora Garcia, but wanted to break out of the mold. These women decided to liberate themselves by stripping down to their underwear and be proud of their curvy figure in which Senora Garcia criticized Ana throughout the movie.

Although, after Ana and the rest of the factory workers “liberated” themselves, Senora Garcia ceased to make any further comments about Ana’s figure. With the Garcia women firmly planted in their beliefs, the Garcia men on the other hand show a high degree of cultural pluralism. It was something that I did not expect in the film, considering that they live in a more traditional culture. In a way, I exhibited my ethnocentricity to believe that the Garcia men would be more firm in their beliefs because the way Senora Garcia described that women should be submissive to the men.

Both the Garcia men are accepting to Ana’s Americanized culture. They are considerate of what is important to Ana which is rooted upon the mainstream culture we are familiar with. The one scene that stood out to me which demonstrated cultural pluralism is when Abuelo conspired with Ana so that she may go out on a date with Jimmy. One would think that someone like Abuelo, who came from a place where the courting rituals were more conservative; would be more firm towards Ana. His appearances in the film were short, but he maintained that sense of openness towards Ana’s culture.

Ana may have adopted most of the mainstream culture, but I felt that she kept some of the more traditional norms that her parents believe in. One norm in particular is the female gender role of the Latin folk culture is called the marianismo. It is the veneration for feminine virtues like purity and moral strength. Although she didn’t fully fit that mold, she did exhibit some characteristics of that role. A good example of this is the scene in the movie where Estella is struggling to keep her clothing factory open, Ana turned to her father for help.

She hated working at Estella’s factory, but she felt that it was her moral obligation to help her sister to keep her business afloat. At the end of the film, Ana decides to leave her home so that she could attend Columbia University which is on the other side of the country. She has an idea where she should occupy in society, and in my opinion she made the right choice. She has adopted the culture where the norm is to venture out and find one’s place in society.

She also made her decision without breaking the bonds of her family by speaking out that the family will not break apart, and asked for her parents blessing. Unfortunately for Ana, Senora Garcia never gave Ana her blessing due to her strict adherence to her culture. Real Women Have Curves is an excellent film that demonstrates the different aspects of culture. It challenges assumptions of ethnocentrism, as well as cultural pluralism. Ana is depicted as someone who is caught in between two clashing cultures and must make a choice for herself where she belongs in society. 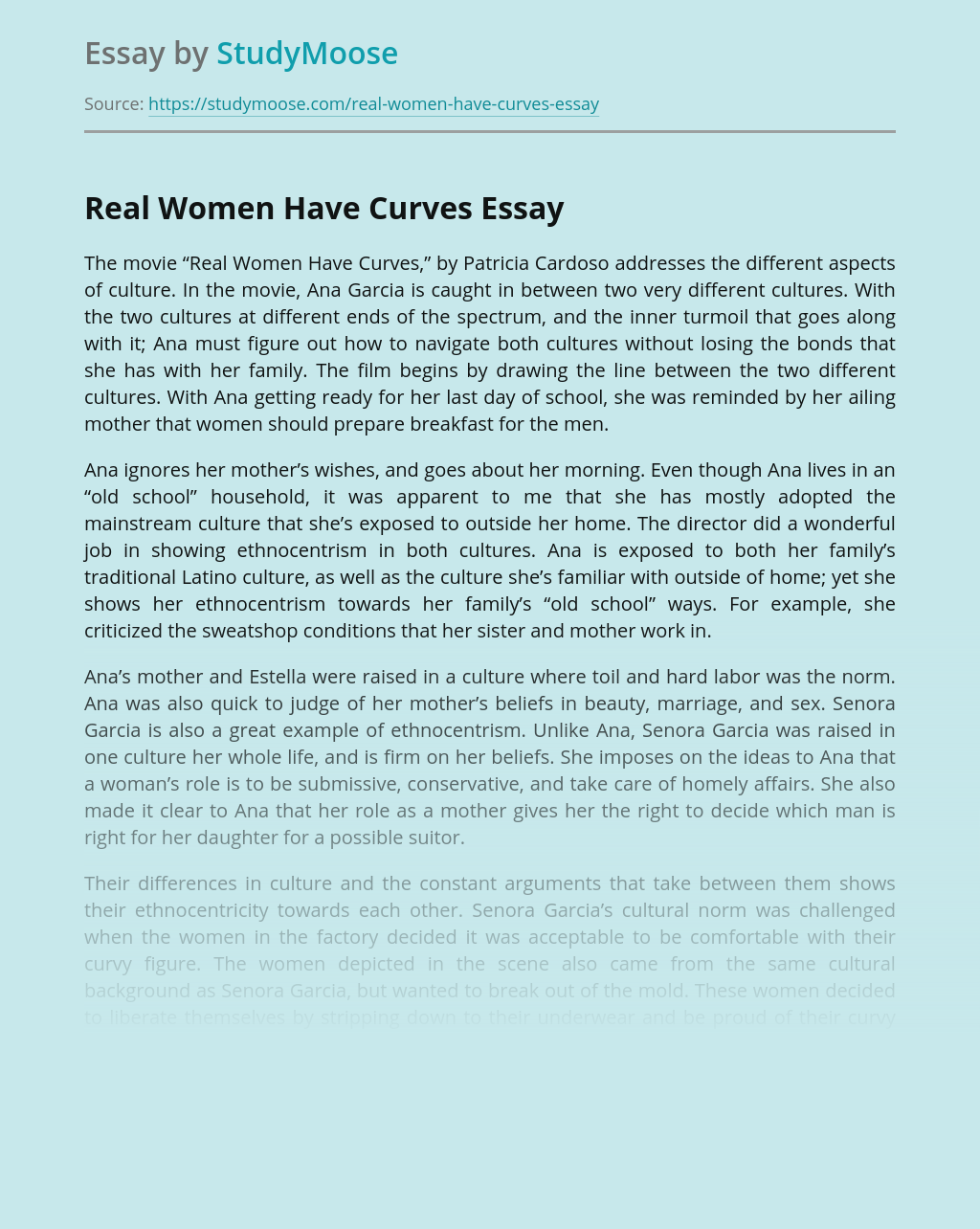 Don’t waste time
Get a verified writer to help you with Real Women Have Curves
Hire verified writer
$35.80 for a 2-page paper
Stay Safe, Stay Original