Informative Speech: "The Causes of Homelessness"

Subject and Purpose
1. This informative speech on “The Cause of Homelessness “is very Inform able and worth listening to, because in today’s economy it could be you or me. Some seem to think homelessness is choice. I find this speech relevant to the world I live in today, due to the high unemployment rate, declining job market, and the economic hardships that families are enduring. This topic is not a broad one, but yet can be spoke of in depth due to the fact I see many homeless people but never thought it would be me until I seen a family friend who has lost everything, this is what made me more aware that it is not just a choice and any day it could be me.

Don't use plagiarized sources. Get your custom essay on
“ Informative Speech: “The Causes of Homelessness” ”
Get custom paper
NEW! smart matching with writer

So when you see a homeless person do not judge it could be you.

The Thesis and Key Points

2. The Speakers thesis statement is clear and limited to one main Idea, homeless people.

The speaker limiting the thesis to one main idea was a great idea, this keep the audience focused on what is being said and do not have a chance of being distracted. The key points the speaker made are very relevant to thesis opening one key point he made was the cause of homelessness which is poverty and then he goes a little further into quoting a man who lost everything who realizes other homeless people where nice and were part of the working community at one point having a job, house, car but losing it all to lack of income.

Research
3. The speaker has done a great job on researching his subject, he uses information from the National Coalition for the homeless and the US Conference of Mayors. The sources he quotes are considered creditable, as far as them being up to date we are in 2013 which I am sure the statistics has changed from 2008. The speaker has properly cited his sources and referenced all research data though out his speech. Before giving the information he states “According to The National Coalition for the Homeless and then proceeds to quote. The speaker presents himself as having a good understanding of the subject and specific points, he speaks without reading from a paper or notes. In my opinion he provided just enough evidence to starch the surface like providing the statistics and some statements from other creditable people.

The speaker has organized his speech very well, he has everything in order from the beginning to the end. I was unable to tell what he was going to talk about by his introduction, but his opening made me curious and grasped my attention. In his body he explained many causes of homelessness and gave examples. At the end of his speech he summed it all up to what he talked about in is body. The attention gripper for me was the story he told of how a couple of teenagers dehumanized a homeless man and left him for dead. This story was a reality check on how people view the homeless people/families that are living on the streets just trying to make it from day to day. The speaker previewed his speech as I mentioned it was very easy to follow and keep focus, and presented a slide show which makes the subject that was spoke on real to the human eye, he used the transitional phrase But, and for instants these flowed very well and are easily spotted this words lets the audience know the subject is going to change.

The speakers deliverance was great he maintained eye contact for more than 90 percent of speech, and his posture and body movement showed that he has done this before and confidents that he can deliver the subject in a positive manner. The speaker overall confidence level is not one of a beginning speaker at one point he sticks his hands in his pocket and continue to give his speech. I believe he stuttered a little over his lines at one point but who is perfect. Once again his overall posture and confident level was excellent. The speaker shows passion for the subject he is speaking on from the hand movements when he speaks on poverty and domestic abuse as being trivial (a means to an end). The speakers volume was just right he spoke high enough for the back of the room could here, and the speech was easy to understand. When given a speech a speaker should consider his audience in the wording of his speech, is he giving a speech to children for educational purposes or a group of college students, this is call no one left behind so the entire audience is on track.

6. Presentation Aids
The presentation Aid the speaker chose to use is a projector hooked up to a computer using a PowerPoint presentation, the use of these really brought out the message is trying to get across. We have some people that absorb information by listening others are visual learners so he covered both bases. 7. Suggestions for Improvement

I would believe that the use of more pictures of the homeless in their day to day situation would have made his presentation even stronger, maybe visiting a soup kitchen during feeding hours. The delivery of his speech would have been stronger if he did not stand in front of the screen but in the middle of the floor.

Informative Speech: "The Causes of Homelessness". (2016, Apr 23). Retrieved from https://studymoose.com/informative-speech-the-causes-of-homelessness-essay 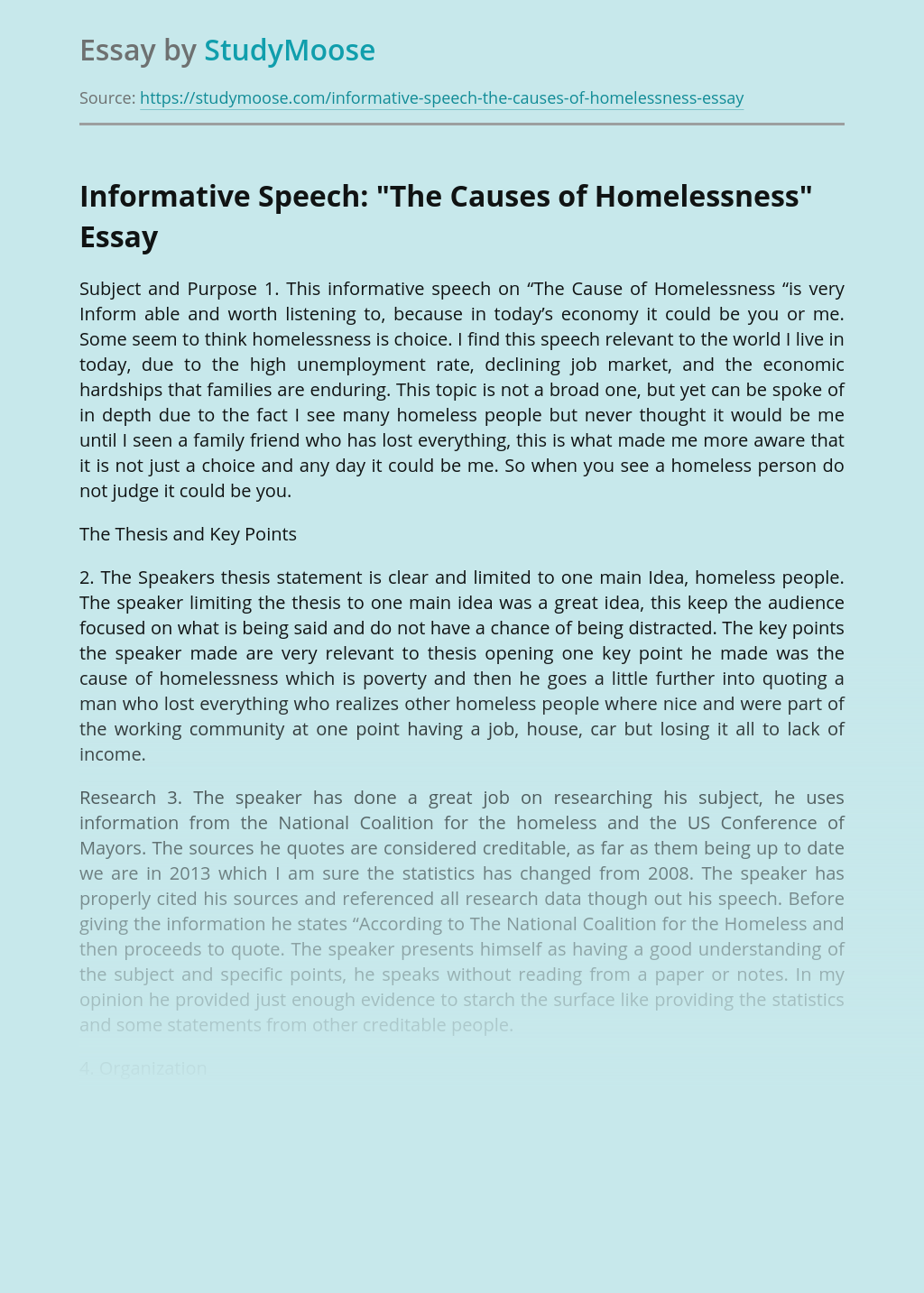