According to 100 empirical studies from seven publications within seven years (from 1981 to 1988), the user satisfaction appears the most widely used single measure of IS success.

Don't use plagiarized sources. Get your custom essay on
“ Information Systems Success: the Quest for Dependent Variable ”
Get custom paper
NEW! smart matching with writer

The most reason for the appeal of satisfaction as a success measure is that the most of the other measures are weak. Wixom and Todd (2005) in the article of “A Theoretical Integration of User Satisfaction and Technology Acceptance” claim that user satisfaction is proved by many researchers to be a weaker predictor of system usage, compared to technology acceptance to usage.

Based on these findings, we can see that the user satisfaction weakly determines the IS usage and the IS usage also weakly predicts the IS success.

However, the user satisfaction significantly and directly determines the IS success. The contributions from this study include (1) there is no consensus on the measure of IS success; (2) no single measure is better than another; (3) even with the attempt to reduce variables to a more manageable taxonomy, a number of variables in different IS success measurements still exist, and (4) theses different variables are not only independent, but also inter-related each other.

As a result, a multidimensional IS success measurement is encouraged.

The article provide a comprehensive view on measures of IS success and suggests an IS success model after analysis of many studies. However, there is no explanation on how to connect those six independent variables. In summary, the article “Information Systems Success: The Quest for Dependent Variable” by DeLone and McLean (1992) lights an interest on the IS success determination.

From this article, we learn which factors are proved to predict a success of IS projects. DeLone and McLean (1992) also encourage more attention on a measurement of the IS impact on organizational performance from IS researchers. After almost a century, subsequent researchers response to such attention by attempting to construct organizational strategies, using IT to obtain better business performance and maintenance of competitiveness from other competitors (used as dependent variables), based on the factors they learn in the past.

Bharadwaj (2000) in the article “A Resource-Based Perspective on Information Technology Capability and Firm Performance: An Empirical Investigation” starts paying attention on IT capabilities that bring a higher business performance based on the IS resource-based theory, which composes of tangible, human, and intangible capabilities. Such IT capabilities can be applied to subsequent articles pertaining to the IS success.

Obviously, Sambamurthy, Bharadwaj, and Grover (2003) put greater concern on human and intangible capabilities than tangible capability to determine an IS success. Melville, Kraemer, and Gurbaxani (2004) in the article “Review: Information Technology and Organizational Performance: An Integrative Model of IT Business Value” also confirm that IS resources, especially tangible and intangible IT capabilities, are valuable and can bring a success to organizations.

Lastly, Piccoli and Ives (2005) in the article “Review: IT-Dependent Strategic Initiatives and Sustained Competitive Advantage: A Review and Synthesis of the Literature” summarize that the use of IT can create business competitiveness and recommend four barriers, which comprise of IT resources (all tangible, human, and intangible aspects), complementary resource, IT project, and preemption (how to sustain competitiveness) barriers, to sustain the competitive advantage in IS use. 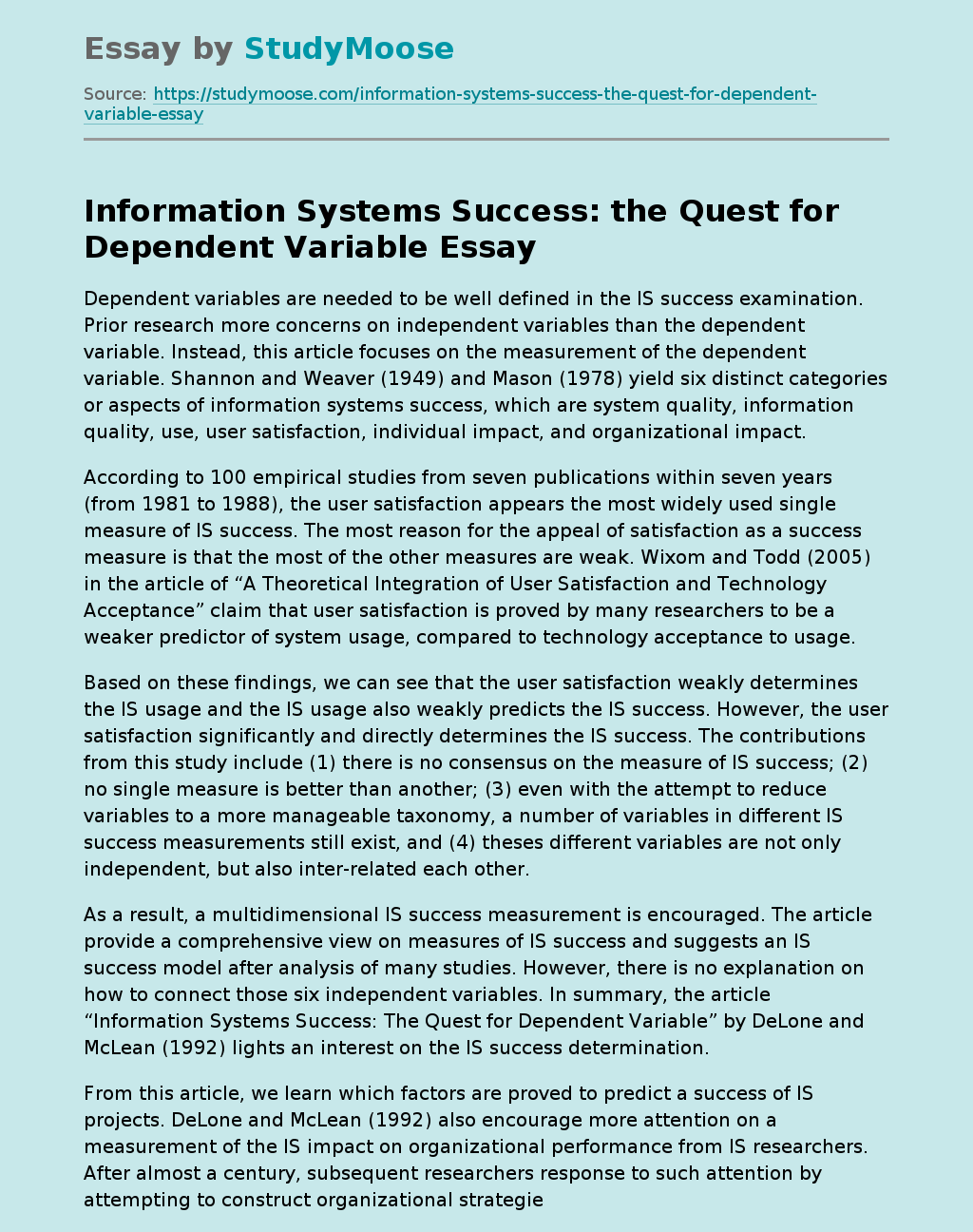