The economic status of a country is greatly depicted by its rate of industrialization of the country. The type of industry that the country relies on, highly contributes to the economic status of the country. Industries are responsible for the overall distribution of the goods and services in the country. In the universe there are five types of industries, the fifth one was recently created. The industries are categorized according to the main functions they perform. The act of creating raw materials which mainly involves manual labor work forms the primary sector of industry.

The quinary sector of industry which was recently introduced and thus not very common in the developing countries encompasses non-profit organizations that are involved in business activities, that is, the introduction and distribution of goods and services to the community (Deanna, Pearson & National Academy of Engineering, 1998).

In my report I will analyze the secondary industrial sector mainly the, manufacturing industries, in America as it is highly thriving due to the readily availability of resources, technology and knowledge (Deanna, Pearson & National Academy of Engineering, 1998). America is currently in a state of economic crisis due to the high rate of inflation, which is depicted by the rise in oil prices, food prices and housing rate, it is experiencing. It is also experiencing the highest rate of unemployment it has had for the last twenty five years, which is 8. 1 percent.

Being the richest country in the world America does not see any need in engaging in global competition thus slowing down the growth of the economy of America. The government has implemented trade policies and regulations that do not consider the growth of the small upcoming companies in the country. The policies and regulations do not give the small companies any chance in growing as they face big competition from the already developed companies that are in the world stock market. Owners of the upcoming companies end up closing down, selling the premises together with the gathered resources.

Others merge with other upcoming companies to be able to survive the competition as they pull their resources together giving them the strength needed to thrive in the competitive market. Also in the next two years, the government of America plans to divert the financial resources of the country to the military department to be able to deploy 400,000 solders and military resources to Afghanistan to help stop the war that exists between the Al Qaeda and America while still aiming at curbing terrorism (United Nations, 2009).

Basing my argument from the discussed environmental factors, in the next three years the secondary industrial sector in America will remain stagnant and dormant as the likelihood of using new technology, resources and knowledge is minimal. As most of the funds will be directed to the military to help them get the desired resources to fulfill their goals, most of the government time will be dedicated to device strategies that will help them curb terrorism without resulting to development of another war. Therefore sufficient time to revise the trade regulations and policies implemented will not be available.

This means that the rate of unemployment will either remain at 8. 1 percent or go higher because few companies will be set up and thus will employ only a small percentage of the unemployed. Therefore, America will not be in a state that will enable it to engage in competitive globalization as the effort of competition is low and resources to use while in the race will not be available. Looking at the age classes in the population of America the older people occupy the higher percentage, presenting an unfavorable situation for the economy of the country.

This is because old people are not productive and mostly suffer from chronic diseases such as diabetes and high blood pressure, this further decreases their productivity level as most of them spend their time seeking medical care (Trewartha, 2007). America mostly imports its raw materials to process them to finished goods. Basing my argument on the current economic status of the country and the plans the government has outlined for the next two years there tends to be a reduction in the number of raw materials that will be imported by the government.

The suppliers of the raw materials will tend to take advantage on the raised inflation rate of the country, thus sell their materials at a higher price. The likelihood of scientists coming up with new technology is very low, resulting to trying to improve the existing technology; therefore the industry will lack the required innovation to increase its performance rate. Hence the probability of the industry to remain stagnant is high (Deanna, Pearson & National Academy of Engineering, 1998).

The environment created by the above factors will make the management of the industry to have a hard time organizing the functions of the industry, as the industries will not be growing. Lack of motivation will be depicted and a chance of mass lay offs of employees will increase. No new staffing quality and quantity strategy will be formulated showing the stagnant growth of the industry. The managers will also have to devise other ways of distributing their finances to help them carry out the normal functions of the industry and to pay debts to prevent bankruptcy. 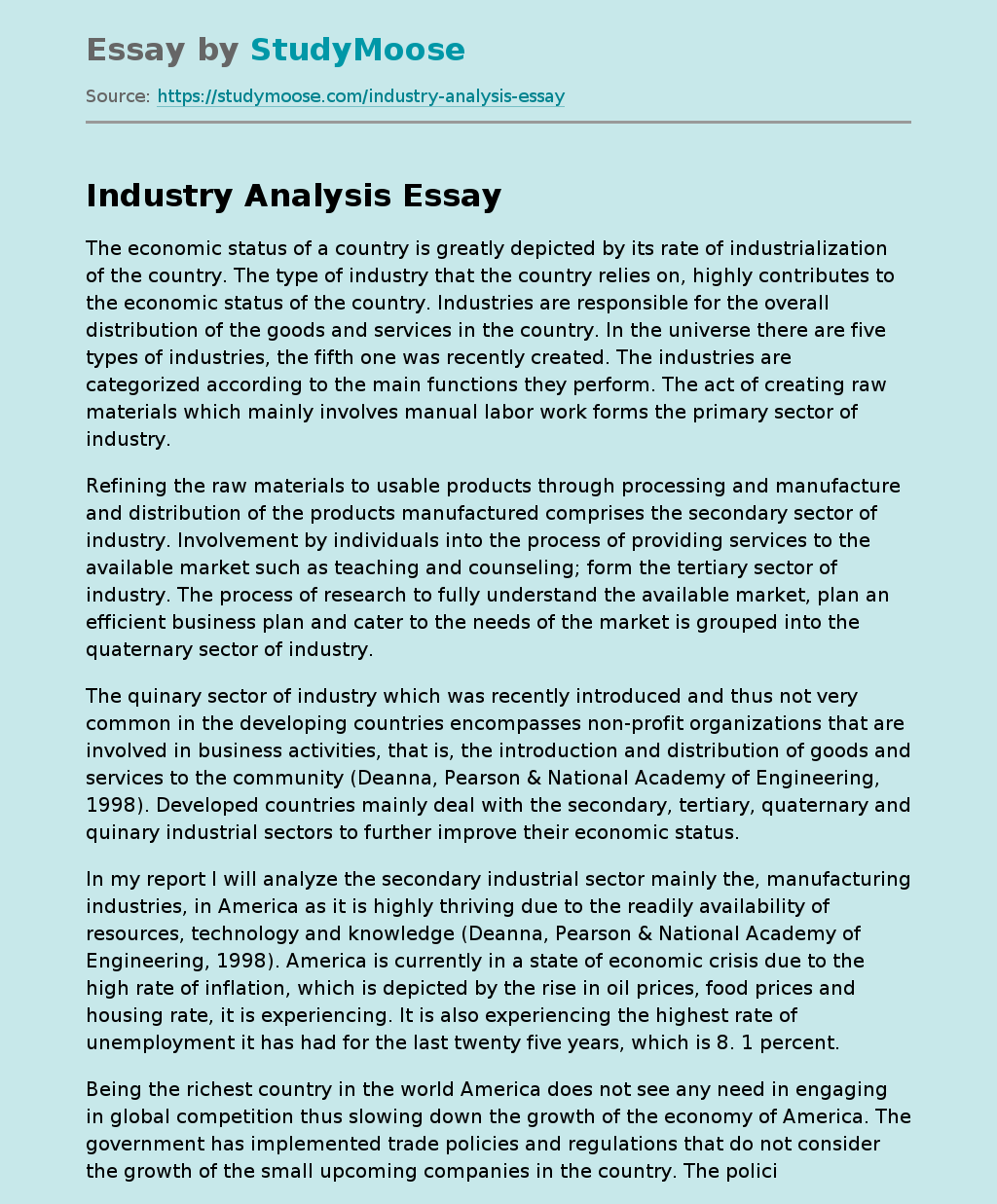