Unions are voluntary associations joined by workers. The Combination Act of 1800, which hindered the growth of unions, states that every workman’s goal, who are entering into any combination should not be obtaining an advance of wages, or to lessen or alter the hours, or influencing any other to quit his work.

Turn in your highest-quality paper
Get a qualified writer to help you with
“ Industrial Revolution Impact DBQ ”
Get high-quality paper
NEW! AI matching with writer

Any workman who did so shall be committed to jail (Doc 1). Although the Combination Act of 1800 prevented the growth of unions, Ralph Chaplin believes that a worker should join the union. He states that there can be no power greater anywhere beneath the sun, but the unions, which makes it strong (Doc 2). Since there’s so many workers working in bad conditions, the labor laws came to action.

The Health and Morals Act of 1802 limited children under fourteen from working over twelve hours a day (Doc 3). The factor Act of 1833, which enacted that no person under 18 years of age shall be allowed to work at night in machinery (Doc 4). It allowed the child under 18 to work less than 12 hours a day or less than 69 hours in any one-week. There was a ten hours act, which said that the women or children’s limit workdays are 10 hours.

Socialism is one of the roles of government in the economy. Adam Smith, who is the father of capitalism, believes in laissez-faire, “hands off” the government. He believes all production should be sale at the best possible lowest price. (Doc 5) While Adam Smith believes in capitalism, Engel is criticizing it. Engel believes the capitalism seizes everything for themselves but not the poor, they remain nothing. (Doc 7)

Karl Marx, the author of a 23 page pamphlet, “The Communist Manifesto”, and Engels recommend that all the working men of all countries should unite and is to be equal, should overthrow of all existing social conditions. (Doc 8) Both Marx and Engels are communists, they believe in Communism. They argued human societies have always been divide into warring classes, and that everyone is equal, no moving up in society.

The evils of the Industrial Revolution addressed in England in the eighteenth and nineteenth centuries are working conditions, lack of necessities, urbanization, and education. The working conditions were terrible so it came up with labor laws that kept workers from working all day. 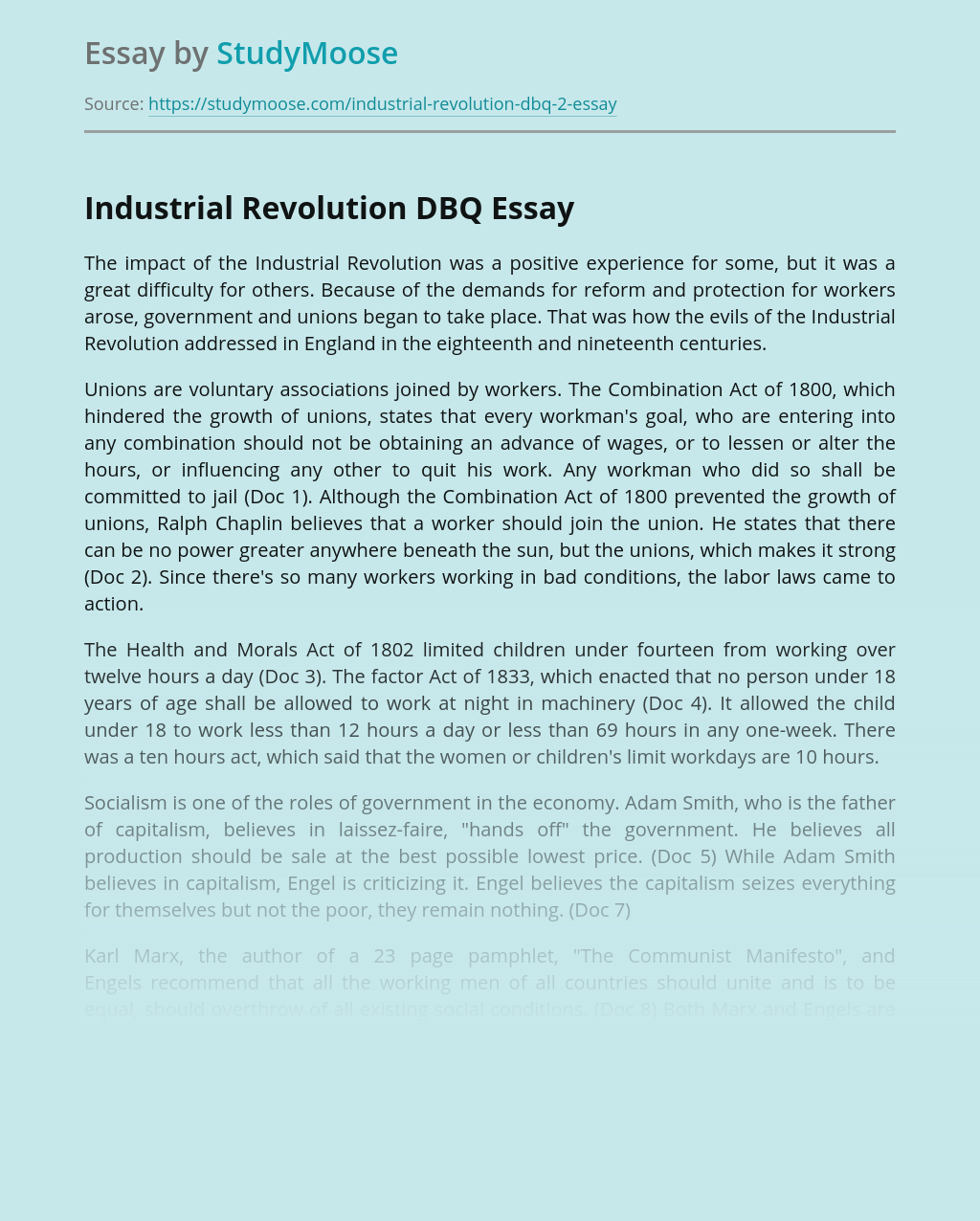 Turn in your highest-quality paper
Get a qualified writer to help you with
“ Industrial Revolution Impact DBQ ”
Get high-quality paper
Helping students since 2015
Stay Safe, Stay Original