With the rapid urbanization and development of big cities and towns, the graph of crimes is also on the increase. This phenomenal rise in offences and crime in cities is a matter of great concern and alarm to all of us. There are robberies, murders, rapes and what not.

Turn in your highest-quality paper
Get a qualified writer to help you with
“ Increasing Crime Rate In India ”
Get high-quality paper
NEW! AI matching with writers

They feel very insecure and vulnerable in the presence of anti-social and evil elements. The criminals have been operating in an organised way and sometimes even have nationwide and international connections and links.

The political links of the criminals have complicated the matters. Kidnappers, rapists, murderers, smugglers and such other criminals are indulging in their crimes under the wings and protection of the political leaders. Steps should be taken to curb and eliminate this dangerous trend. The masses should rise to fight political patronage of criminals.

Corrupt politicians should be denied party tickets and party positions.

Recently the Tan door Murder case shocked the whole country, and now the Balboa Srivastava case and involvement of many leaders has come to light rich men and their wards are being kidnapped openly for ransom. Old, retired and lonely men and women living in posh colonies are easy targets of these criminals. The servants murder their masters and decamp with their booty. The old men and women cannot do without domestic help and servants.

And writher turn, the servants are killing and murdering them. The police and the administration are to be blamed for the deterioration of law and order in the cities. Precious little is being done to check these very serious crimes. Sometimes, policemen are a party to these crimes. They get their share of the loot.

The crime situation in other metropolitan cities like Bombay, Calcutta, and Madras etc. is almost the same. Crimes are being committed in an organised manner. Criminals have turned professionals and can be hired by anyone who can pay them handsomely, Well educated young men, belonging to good families have been found involved in many a crime. Some criminals get a hint from Indian and foreign films and TV serials. If they succeed in committing one crime successfully, they become fabulously rich. They find it worth all the trouble and risk.

Mumbai is notorious for prostitution, and child abuse. Mumbai is the commercial capital of India. To it also goes the distinction of being the centre of economic offences. Land, arms and drug mafias have a well spread network there. They finance and help the production of magi mega budget films and have secret political links and influences. Mushrooming of slum colonies has also given rise in the rate of crimes in the cities. Mumbai has the largest slums. Mumbai is dotted with shanty townships. These slums and huge hopers are dens of all sorts of crimes.

Other big cities and towns are not far behind in the matter of crimes. Child Criminals age also on rise. Children begin with petty crimes and then turn out notorious criminals in young age. Violence, Killings, murders, rape scenes etc., in films have helped in spread of crimes in children.

They imitate what they see in films and TV serials. Unemployment and frustration among youth have contributed much to the rise in crimes. Unless these problems are solved, no significant achievements can be made in curbing crimes. Moreover, the police force and intelligence agencies should be made more efficient and effective. Police people should have a human face and be friendly to seek cooperation of the public. There should be no violation of human rights while dealing with criminals. Moreover is with sympathy, it care arid human approach that many a criminal can become useful citizen 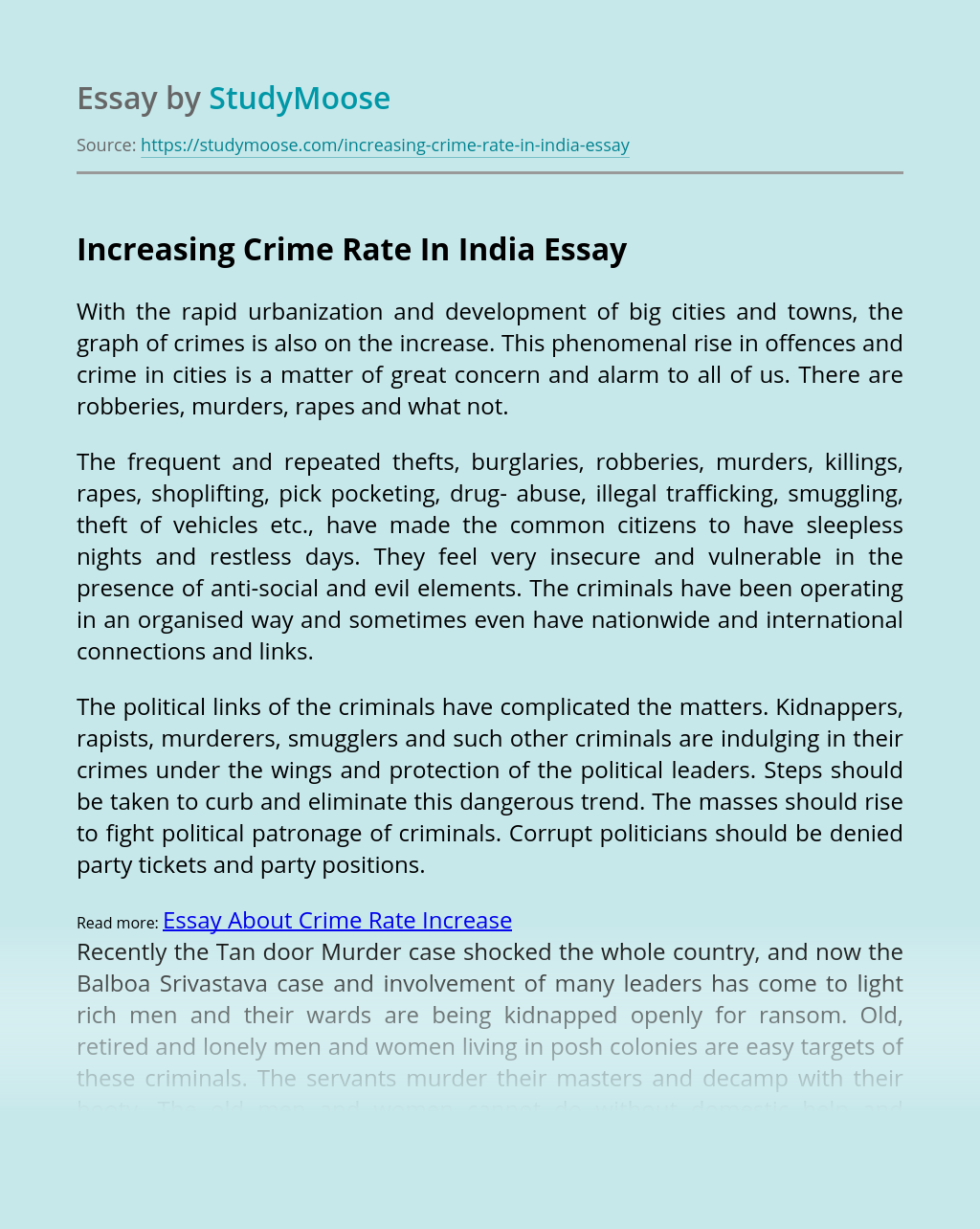 Turn in your highest-quality paper
Get a qualified writer to help you with
“ Increasing Crime Rate In India ”
Get high-quality paper
Helping students since 2015
Stay Safe, Stay Original