Which Crime Has More Effect on Society: White Collar Crime or Street Crime?

Imagine working over thirty-five years with a successful company; faithfully contributing to your own retirement. Only to find out those two weeks prior to your first retirement vacation your account has been depleted. This crime is known as white-collar crime. White collar crime was coined in 1939, by a man named Edwin Sutherland. Sutherland defines white collar crime to be a crime committed by the perpetrator during the course of his or her occupation (S. Rosoff, H. Pontell, R. Tillman). White collar crime is happening every day.

Don't use plagiarized sources. Get your custom essay on
“ Which Crime Has More Effect on Society: White Collar Crime or Street Crime? ”
Get custom paper
NEW! smart matching with writer

In general terms, non-violent crimes for financial gain were stated in this subject as well. White collar crime is what many in society fail to express as other would if it was street crime. If society as whole were to become more knowledgeable and understanding of the magnitude behind white collar crime, then they too would realize and immediate affect behind a violent act is not more harmful than one such as white collar. White collar crime which often time take affect years later, while street would have an immediate effect on someone.

According to the “Profit without Honor”, the value of a white collar crime would be thirty two hundred dollars and would be consider non-violent. Street crime on the other hand, would be more violent, and only account for one-tenth of white collar crime. Many would agree that this crime is harmless, because no one is being physical harmed during this process. Even sparing us the rod to live another day. According to “White Collar Crime and Criminal Careers”, theories believed that criminals were only different from others because they were labels as such (D.

Weisburd, E. Waring, E. Chayet).White collar crime is ruthless, because many of us have entrusted in our financial institution to provide a level of protection for us as employees once we have retired. The perpetrator of such heinous crime is trusted with such sensitive information to deliver our fund once we have reached retirement. Many fail to realize how much damage a perpetrator can cause to our lives within seconds; even depriving us of our financial future. At large, society perspective of a criminal is frequently believed to be shady or in a dark space. This is why white-collar crime would not be our typical crime as it is rarely deemed to the same grade that street crime would be. There is very little if any public shame when it comes to white-collar crime. The list of crimes that fall under White collar crime is extensive and majority of society are not interested find out what they are. “The most common white-collar offenses include: antitrust violations, computer fraud, credit card fraud, telemarketing fraud, bankruptcy fraud, healthcare fraud, insurance fraud, mail fraud, government fraud, tax evasion, financial fraud, securities fraud, insider trading, bribery, kickbacks, counterfeiting, public corruption, money laundering, and embezzlement”(N. Shover, A. Hochstetler). As you may have notice, the crimes mentioned do not have any physical harm involved directly as opposed to robberies, assault, murder or rape. There is a common belief shared by society and amongst criminal-justice personnel that white-collar crime is only a temporary financial gain. These crimes would include money being taken from a group relatively than some physical attack on a victim.

This is the era of the white-collar crime, a time when the words thieves and businessmen go hand in hand. Enron and their accounting firm Anderson Accounting brought what we know as “white collar crime” to the forefront. White-collar criminals are not known to be dirty criminals, because they use their heads to get what they want from society. White collar criminals do not use their muscle; instead they use their brain for mischievous way to manipulate people. These criminals are just as dangerous as the bank robbers and murderers in my opinion. In these times, even the most trusted people are being convicted of white-collar crimes, your neighbor, the banker you have trusted for ten plus years, the closest of family friends, no one can be ruled out. White-collar crimes can differ in the sort and magnitude of the crime. There are always new scams coming out every day that society falls victim to.

Embezzlement (theft or misappropriation of funds placed in one’s trust), false advertising, price fixing, and consumer fraud are some of the more prevalent types of white collar crime. Those that have the responsibility of controlling petty cash in a business are more likely to commit embezzlement. This is one of the fastest growing crimes in the nation. According to the Federal Bureau Investigation (FBI), embezzlement rose thirty eight percent from 1984 to 1993(Federal Bureau Investigation 2014). Consumer fraud is another growing form of white- collar crime. This is defined as the use of dishonesty, lies, or misrepresentations to lure clients to purchase goods or services. Bogus ads, job scams, and telemarketing scam are all examples of consumer fraud. Basically these scams the perpetrator will ask you to send money for something that is non-existent; later to find out the money never made it to its intended destination. When people think of crimes, many think of get-away cars and bank robbery. The new weapons of choice for criminals in this this new era would be checks, credit, and uses via a computer or a telephone. They are just as damaging as a man/woman with the pistol. White-collar crimes are committed out of greed; the perpetrators who usually are behind these types of heinous criminal activity are specifically older white males.

The honest extent and expenses may stay unknown, and the data we view may be limited, however, if we prepare our self and our families we all can avoid falling prey to these worthless perpetrators. In closing fear not the man in the ski-mask, but the man with the suit and tie. 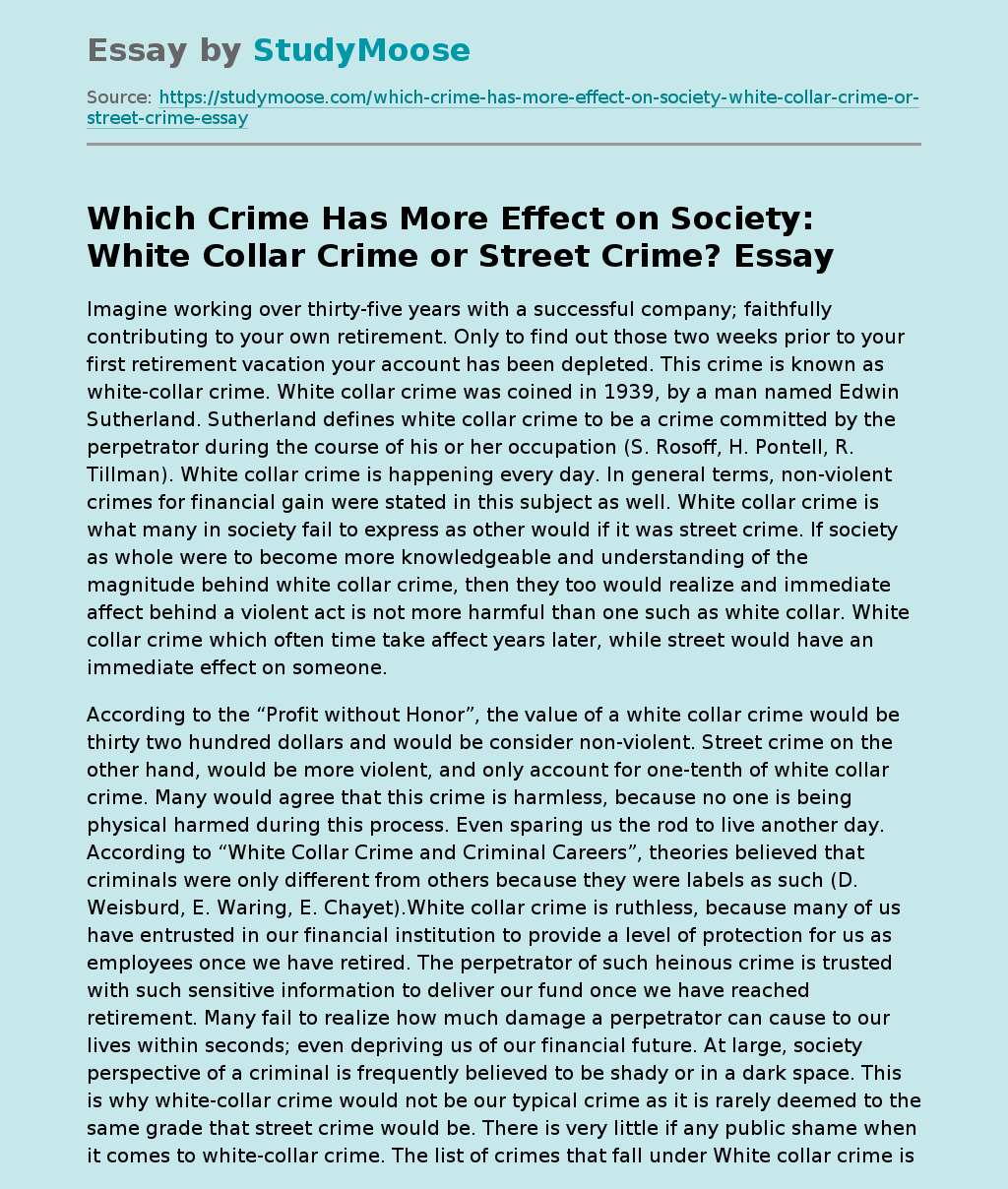