Impact of the Computer and Internet Essay

Computers first made there debut and have been around since in the 1940s and the Internet since in the 1970s. Computer were large single room unit that have changed into hand held devices and microchips. The Internet was a blog where people from all over the world could post questions and get answers and now the Internet has become a global search engine. In the future, computers and the Internet will not only continue to evolve; they will be every day aspect to living in this society.

Don't use plagiarized sources.
Get Your Custom Essay on Impact of the Computer and Internet Just from $13,9/Page

Computers will be the new tools for communication and also play a big part in our every day life.

In the future, our day’s tasks will be checked using a personal robotic butler, the misplaced car keys will be located by entering the word keys into a cellphone and getting a call back saying bedroom. Our cars will be self driven and would be able to park themselves. After work, there may be ads on the shopping mall wall reconfigure to suit each person passing by, so when there is a sign for a concert, you buy a ticket by waving your cellphone over the billboard.

This next wave of computers will be so small they hardly seem like computers at all.

The screen of billboards will be able to broadcast different ad depending on the time of day or the person walking past. People will be able take a picture of the ad using their camera phones and use it as a coupon for the product being advertised. They may also be able to project imagies of family member which you talk to them on telephone call. In the future, the number one major issue will be privacy. We are currently leaving a digital footprints and it will only grow larger in the future. Tracking someone can be iillgal and has raised troubling privacy issues but in recents years people are giving up this information free.

Websites like Twiter, Myspace and Facebook give people the ablity to post and check into area all around the world. People are also allowing strangors to know if they are on vaction and even some people are allowing their address and information to be put on these sites. The social inpact of allowing computer to expand will be huge. Police and government surveillance could go beyond wiretapping to body-tapping. Big business could track a person’s spending and shopping habits. On the criminal front, the sensors could enable better stalking, kidnapping, and theft now that our every location is broadcast to the world.

The only way we’re going to be able to have privacy in the future is to have it legislated. People want our data and will do anything to get it. We need to be able to protect ourselves and the only was to do it in the future is to not allow computer to tap into our lives. The internet brings as wide an audience together as possible. With the importance of accessibility getting the recognition it deserves lately. Rather than reading and clicking, the people will be able to tell a browser where they want to go with spoken commands.

People now read newspapers watch television and listen to the radio via the Internet and soon all of our communications phones, TV, and the Web will be delivered over a high-speed “broadband” connection. People are also creating their own media including blog posts, music and videos and sharing them with huge audiences without needing permission from the gatekeepers. The Internet is changing the way most everyone experiences media. According to Free Press. com “It could become the central nervous system of a healthy democracy the greatest engine for free speech, civic engagement and economic growth ever known”.

It may be our last, best hope to make an end-run around the traditional media gatekeepers. There is a similar threat to society because of the open Internet today, and the stakes couldn’t be higher. High-speed Internet access is fast becoming a basic public necessity, just like water or electricity. To protect free-flowing Internet access for everyone, people need to get involved. It has gone from lifeless and robotic to something a lot more palatable in the last few years, and seems to continue to improve.

Another issue could be keeping some users away because that the Internet can be a vast and scary place. Audio surfing could be perfect for the commuters, children learning to read, step-by-step tutorials as well as the casual multitasking user. In the future, web surfing could be available on any device. It seems the technology industry is eager to integrate the Internet into every device. People will start by adding touch-screens to fridges and other appliances might create new opportunities and challenges for interfacing. Touch screen technology is only scratching the surface on intuitive pproaches to interfacing.

More widespread Internet delivery will mean reaching a wider audience. The major weakness to the increase of connected devices comes in the same flavor as the raging net neutrality issues being discussed today. If the Internet is tied into content devices like televisions, broadcasting companies might start pulling more of their annoying control-freak shenanigans in an attempt to capture a greater audience. This will be temporary; the battle of old-media vs. the Internet has only one ending for years, the Internet has been about serving the singular user.

With the growing need and importance of online community, multiple-user experiences seem like the next logical step. The social impact of the internet will be negative at the rate the internet is going. As people use the internet more, they will be able to keeping up with people more, spending less time talking with their families, and feeling more lonely and depressed due to the lack of human interaction. These results can change interpersonal communication was their most important reason for using the Internet.

Online platforms, for instance, have reduced the costs of communicating and minimized the impact of barriers like time and geography. In conclusion, computers and the Internet will not only continue to evolve; they will be every day aspect to living in this society. Computers will be the new tools for communication and also play a big part in our everyday life. The internet will bring us wider audiences and accessibility to people all over the world. Both will have negative and positive aspect in society but may bring the world as we know it closer.

Impact of the Computer and Internet. (2016, Oct 26). Retrieved from https://studymoose.com/impact-of-the-computer-and-internet-essay 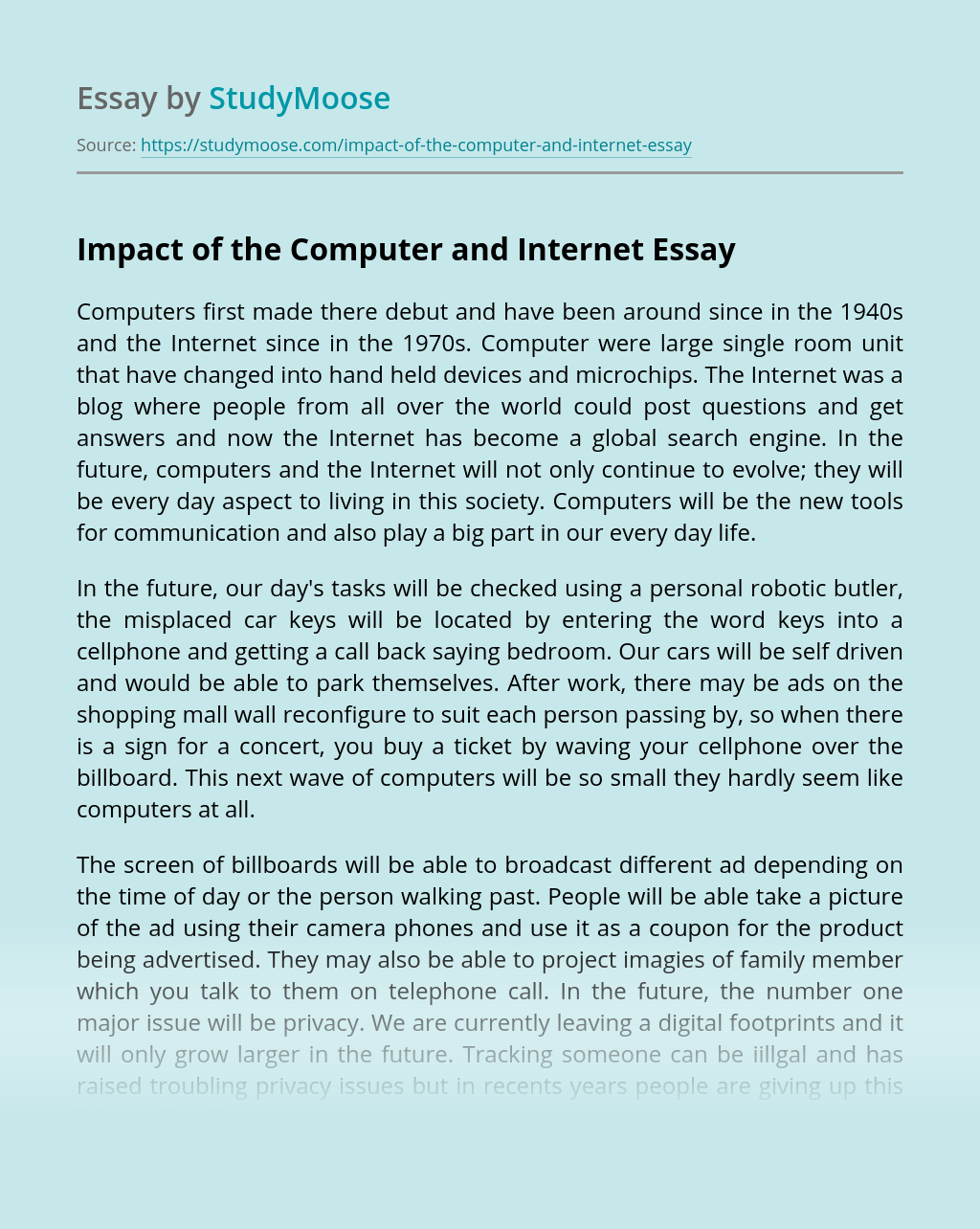 Most Dangerous Game with the Lottery

The Most Dangerous Game, by Richard Connell and The Lottery, by Shirley Jackson portray the common theme that people remain indifferent to cruelty until they are the recipients of it. Both stories show that when the darker side of human nature centers on itself, evil prevails showing how man is innately evil and that convictions... VIEW ESSAY

As said in the paragraph above, Burger Machine’s brand name is its main “trump card” in the burger stall market nowadays. When Filipinos think of affordable burgers from burger stalls, they would most likely think of Burger Machine. This increases their chances for repeat and impulse buyers, which sets them apart from their competitors. Taste... VIEW ESSAY

A few decades ago the world of education was very exercised by the forerunner of differentiation which was called ‘mixed ability teaching’. Then people began to realise it was not just ability that could be “mixed’’ and that teachers had to cope with a plethora of differences: learning style, age, motivation, prior learning and experience,... VIEW ESSAY

Army Values Essay Honor, integrity, selfness-service, duty, respect, personal courage, and loyalty, these are the 7 army values in which each and every member must stay true to. My definition of honor may be skewed from the general publics view of honor. In my eyes, when you are thankful that you are given the opportunity... VIEW ESSAY