Theme of Betrayal in the Novel “1984” by George Orwell

In the novel “1984” by George Orwell the theme of betrayal is reoccurring throughout. We see different elements of betrayal in each part of this book. From the reader’s introduction into the society of Oceania. To the events leading up to the ultimate betrayal. The character that we see this world through is Winston Smith. His experience is meant to be that of the average party member. What he goes through could be the same as many others, giving the sense of how deeply betrayal is engrained into the world of “1984.

Don't use plagiarized sources. Get your custom essay on
“ Theme of Betrayal in the Novel “1984” by George Orwell ”
Get custom paper
NEW! smart matching with writer

In the first part of the book Winston Smith is introduced as a party member who has a slightly rebellious side. His world is full of telescreens, hidden microphones, and spies that show the government’s distrust of its citizens. They cannot say, do, or even think anything against the head political figure, Big Brother. The citizens of Oceania must stay on their toes at all times, even when in their own house’s.

Children are hailed as “Child Hero’s” when they betray their parents and turn them in for thought crime. Winston lives in a world in which parents must fear the betrayal of their own children. Oceania is a society that promotes the division of families through fear.

In part two it is shown how one’s unrest will lead to their eventual act of rebellion under totalitarian rule. It starts with just the writing in a journal, a thought crime punishable by death. It wasn’t long before Winston found someone just as himself, Julia.

They found ways in which to meet and canoodle. They give each other hope, happiness, and something to look forward to everyday. This bounds them to each other, gives them something to hold onto, they make a promise to not give the other up. They seemed to be in love, and love makes people do foolish things and take foolish risks, risks such as renting out a space for them to meet at.

But what they didn’t know was that this was what the party was planning on. In part three Winston and Julia are captured for their crimes, the reasoning behind the party’s motives is brought to light and the ultimate betrayal occurs. Once captured they are taken to the ministry of love and severely beaten and tortured. During all of this the only thing that keeps Winston alive, keeps him going is Julia. The bond that they shared is the only thing that keeps him sane. During this whole time he is tortured he confesses to things he didn’t do, gives up people that he doesn’t know all in hopes to stop the pain. But the one thing that keeps him knowing that he is winning is the fact that he never gives up Julia, whether or not she did the same for him. Until he is brought to ROOM 101. There he loses his upper-hand.

Through the use of Winston’s greatest fear, rats, O’Brien is able to break this bond making Winston betray Julia, the woman he loves, by offering her to be put in his place. This is the ultimate betrayal. Betrayal is deeply rooted in this novel. It is demonstrated in the Oceanian society in the lack of trust that is seen by the government with its people, people with each other, and even children with their parents. After their time in the ministry of love Winston and Julia do meet again, but after what they have been through it is impossible to have anything similar to the relationship they had before. The party has and uses its power to isolate the populace and make it so that they are unable to share comradery, friendship, or love between one another. 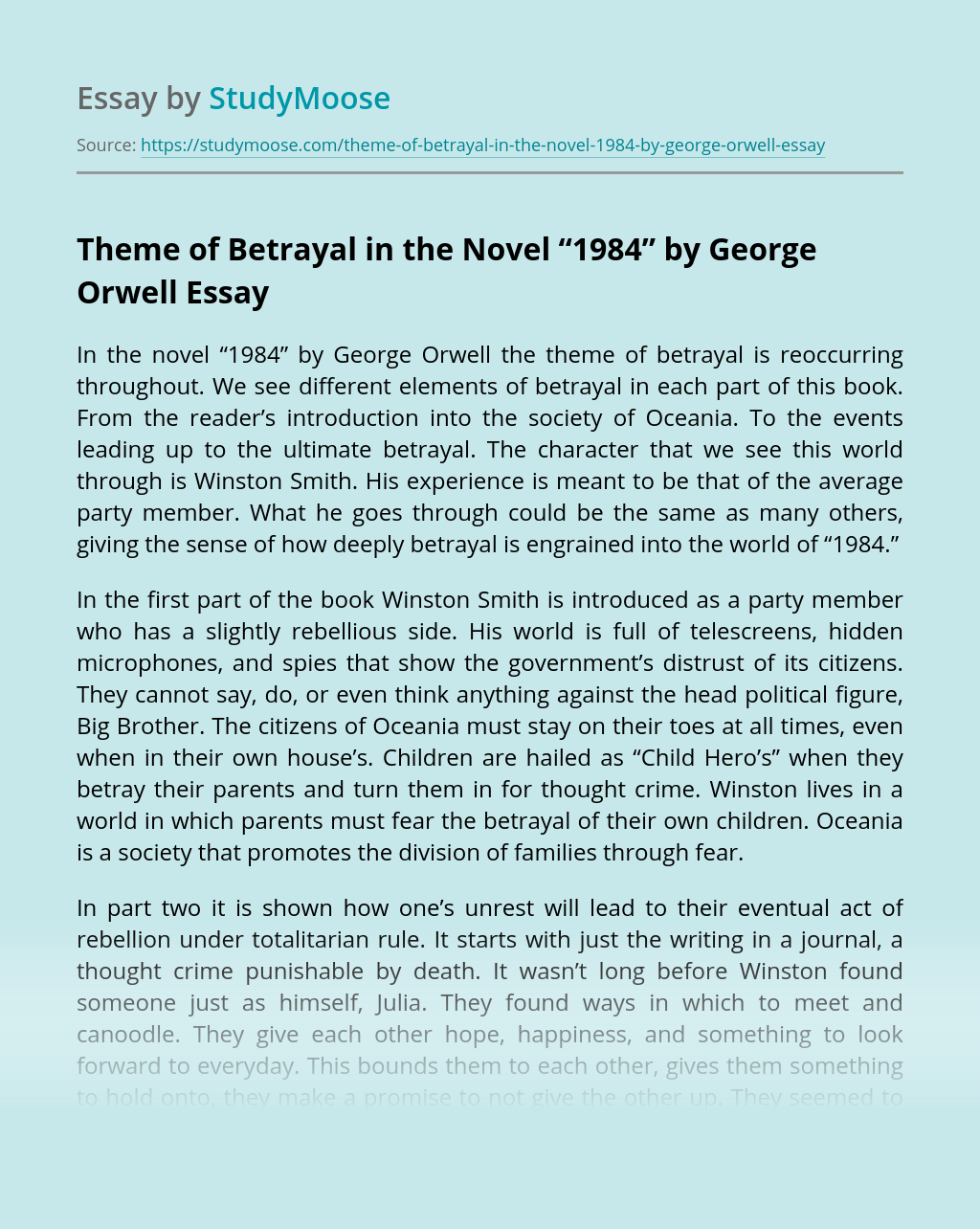