The theme of Poem 508 Im ceded Ive stopped being Theirs- is the exploration of the narrators growth from childhood to adulthood, through the development of spiritual consciousness.

The reader is immediately made aware that the narrator has undergone a dramatic change. With the use of the word ceded, there is the sense that something has been given away. It is usually territory that is the object of this verb and so its unusual application to a person captures the readers attention.

Don't use plagiarized sources.
Get Your Custom Essay on ‘I’m ceded – I’ve stopped being Theirs-‘(Emily Dickinson) Just from $13,9/Page

Furthermore, it is punctuated by Dickinsons familiar dash which isolates and emphasises it as if it were followed by an exclamation mark. This expression appears to be an exclamation of relief to be freed from the obligations of the expectations of her parents and this interpretation is supported by her statement -Ive stopped being Theirs-. This is a strong, almost defiant statement, which seems to be a declaration of liberation and individual existence and identity. The forced caesura created by the use of dashes on either side of the statement indicates a rupture.

The use of ceded makes it sound as if it is not a person who is being discussed and the sense of the impersonal is further developed in the way that Dickinson refers to The name. The narrator is not taking ownership of the name and emphasises this with is finished using now, implying it was temporarily borrowed. Similarly, the narrator does not take ownership of the spirituality of the Baptism They dropped upon my face. The narrator does not regard it as holy, thereby rejecting the sense of divinity.

The narrators childhood is finished And They can put it with my Dolls,. In this phase of life she has no use for the toys. Equally she has no use for The name. It is noticeable that name is not capitalised illustrating its lack of importance for the narrator. In this first stanza, there is also the rejection of and moving on from the string of spools, and threading which are typically womanly pursuits. The narrator used to obediently follow such activities but she daringly declares her rejection of traditional, female roles. The dashes on either side of too give this declaration an anxious, breathless quality, further indicating the narrators audacity.

In the second stanza, the reader is alerted to the narrators development and growth; it transcends beyond the physical development of the child to adult, to the spiritual development culminating into her entering into a covenant with God. The narrator is aware that to have been Baptized, before, without the choice does not have significance. The Baptism before is the imposition of her parents beliefs and values. By rejecting their religious beliefs, the narrator is also rejecting their name and the imposition of feminine activities, thus asserting herself as a strong, adult woman who is free to make her own choices. As in Poem 324 Some keep the Sabbath going to Church-, Dickinson emphasises the importance of choice; in Poem 508, the narrator objects to her parents values and beliefs, together with the religious expression of the community.

Similarly, in Poem 324, the narrator rejects the way in which the majority of people choose to observe the Sabbath, preferring to keep it, staying at Home-. The Poem ends with the narrator stating So instead of getting to Heaven, at last -/ Im going, all along. This seems to pre-empt the ending of Poem 508, in which the narrator concludes I choose, just a Crown-, showing that through the course of both poems, Dickinson grapples with the issue of religious belief and its expression, arriving at the conclusion that she will engage with religion in her own way, indicating that both Dickinson and the narrator have grown by the end of the poems. Paradoxically, in her sonnet Tears Elizabeth Barrett Browning, whose poetry influenced Dickinson, talks about an unconscious refusal to grow. She advocates that the reader look up! … And leave the vision clear for stars, yet she seems to be refusing to do so herself preferring to keep hold of her grief for fear of again losing what she mourns for.

The narrators second Baptism contrasts dramatically with her first, this time, consciously, of Grace-; her spiritual growth is evident. Gods Grace allows the narrator salvation from Original Sin. By choosing freely to participate in a second Baptism, the narrator is embracing a religious and spiritual life and is Called to my Full. It appears that she is undergoing an epiphany. Through this transcendent experience, the narrator is completed, connecting with the spirituality of God. With the use of supremest, Dickinson is able to convey both God as the Supreme Being and the supreme name bestowed upon the narrator by Gods Grace. By referring to her small Diadem filling up Existences whole Arc, the narrator suggests that her soul has expanded, thus demonstrating her spiritual growth.

In the third and final stanza, Dickinson contrasts the life of her narrator pre-epiphany, with that post-epiphany. My second Rank too small the first- Dickinson makes the reader aware of the enormous impact that the epiphany has had on the narrator. In the previous stanza, Dickinson described how the narrator filled up, and now she allows the reader to see how it has influenced her life, through the direct comparison between the size of her existence before the epiphany and the size of it afterwards. With her words, she creates a picture of the repression of her childhood, symbolising this with the half unconscious Queen- on her Fathers breast.

In holding the narrator to him, her father is simultaneously protecting her and repressing her. Dickinsons earlier denunciation of [Their] values, along with her final declaration of the right to choose illustrates a Romantic desire to be herself. Dickinson clearly believes that her first Baptism lacked significance, due to her unconscious state. This time however, the narrator is said to be Erect; literally she is no longer a baby who is unable to stand, and needs the support of her Fathers breast. Furthermore it is a strong visual image, symbolising her full adult status.

The narrator has clearly grown through the course of Poem 508; physically she has grown from a baby to a strong, independent woman, yet more importantly, she has grown spiritually. The narrator has been selected by God to be saved from Original Sin and the magnitude and significance of this cannot be overstated. It is evident from many of her poems that Dickinson despises the way in which the Calvinist community placed a greater importance on religious ceremony than on the meaning behind it.

The narrator therefore appears grateful that God has recognised her inner spirituality over the ostentatious actions of others which can lack sincerity. The narrators contemplation throughout the poem results in her coming to a conclusion at the end. This is reflected by the rhyme scheme of the poem; whilst the first and second stanzas lack an apparent rhyming sequence, Dickinson employs rhyme and off-rhyme in the third stanza, demonstrating a subtle movement towards a more harmonious existence, thus ending with the optimistic sense of growth. 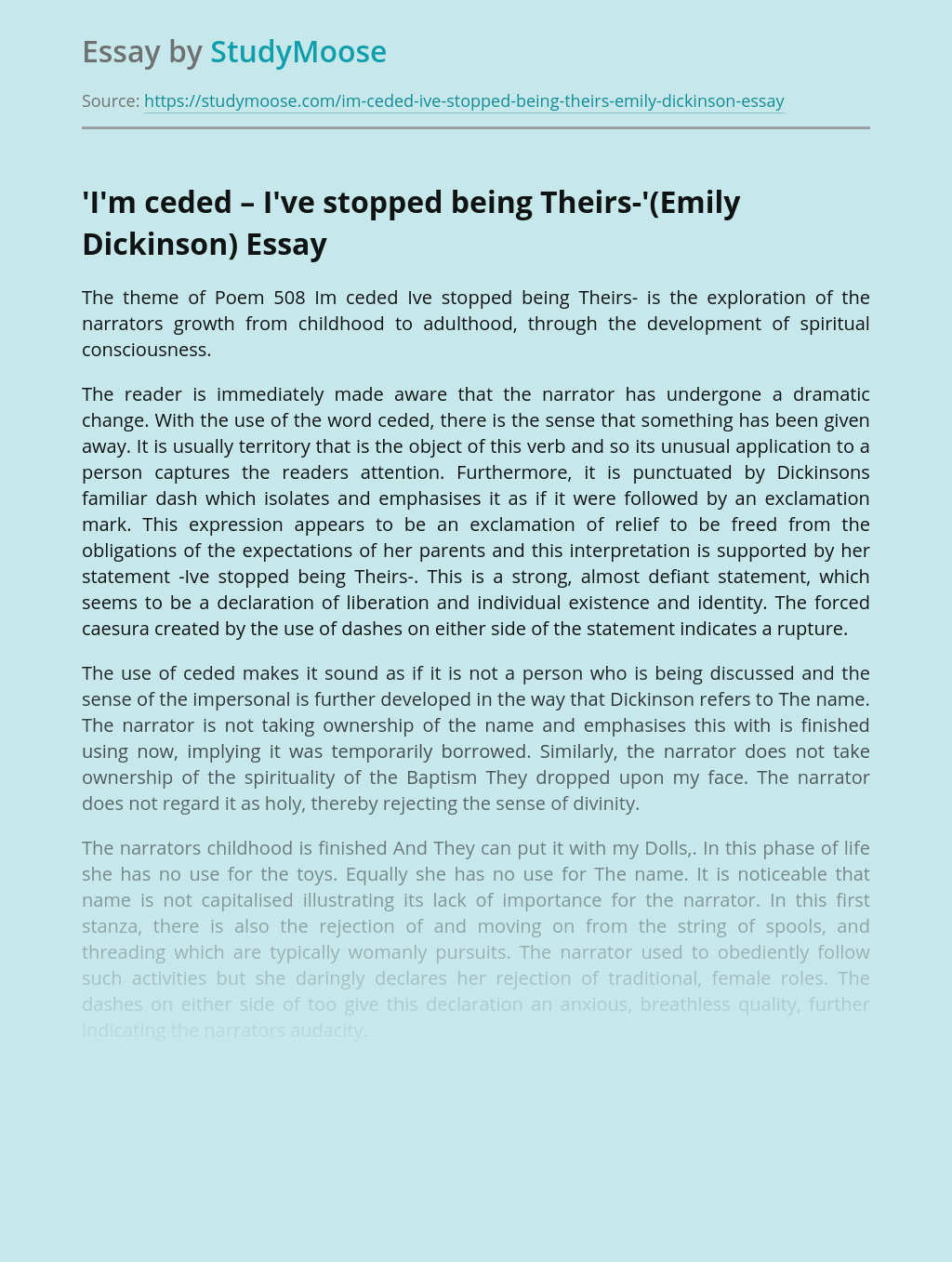 Prejudice in the Merchant of Venice

The conflicts between Apple and Samsung

In the emerging market smartphone usage is increasing, while the most representative brands are Apple and Samsung. Apple is the most valuable US brand that has played a dominant position in US; while Samsung is a South Korea multinational conglomerate firm and the represent products are innovative and revolutionary smartphone and tablet. Apple and Samsung...

Introduction America’s Promise Ministries is an anti-Semitic religion that hides behind Christianity. This organization is in a position to create the perfect storm. They are a church that feeds their interpretation of what God’s intent for humankind is and able to distribute right-wing racist material anywhere in the world. Is it wrong to want one...

The Cause of World War II

Why was the world plunged into WWII in 1939, what is the most effective response to aggression, appeasement, or collective security? The 1920s began with a favorable outlook for peace, however towards the end of the decade, clouds of war began to form. Aggressors began to take charge and strong feelings of nationalism arose. Fascist...

Hinduism and Buddhism vs. Confucianism and Taoism

Hinduism is, some would say, the world’s most ancient and sprawling religion. Its scriptures and teachings are voluminous and wide-ranging, addressing everything from science and history to philosophy, art and, of course, spirituality. Comparatively speaking, the Hindu teachings are uniquely inclusive rather than exclusive. One of its early Vedas openly recognizes the universality of the...