Emily Dickinson’s View of Death and the Afterlife

Emily Dickinson has been known to write poems expressing grief and pain while portraying Death in varied ways. However, if we read her poems about Death and Pain, we see that there are commonalities between her works. Emily Dickinson sees Death as something that is both final and yet a gateway to infinity. This finality is expressed as the inevitable ending all of us must go through. And yet, the perpetuity of life never ends in a death of a loved one.

Don't use plagiarized sources. Get your custom essay on
“ Emily Dickinson’s View of Death and the Afterlife ”
Get custom paper
NEW! smart matching with writer

Likewise, her poems carry a message of the afterlife which is the new beginning for those who died. Death is seen as being final.

There is no resurrection or reincarnation. There is only death at the end. In her poems however, Dickinson describes this ending as something that is both highly significant and mundane. At first, this seems contradictory. But what Emily Dickinson is trying to say is that death is something that will have a huge impact for everyone and yet because it happens to all of us, it is ordinary and a part of life.

There is something momentous about death and the impact it has on people. Emily expresses this in her poem, “My Life Closed Twice Before Its Close. Here, she describes the death of two of her loved ones even before she dies. She describes these experiences of death as being “so huge, so hopeless to conceive. ” Experiencing the death of those close to you seems so insurmountable that it is portrayed as inconceivable.

There is finality in this line. There is a tone of powerlessness to continue on with life because death came and it was too much to bear. In the same poem, we note that Emily Dickinson does not say that there is no life after death. Yet, we see that she describes death as closure.

The line “my life closed twice before its close” defines death as life’s close or life’s end. And even a death of a loved one is described as such because the tragedy that comes with death is too unbearable that it seems like an end to living. However, in some poems, Emily Dickinson describes death’s finality as something trivial and banal. This does not undermine the huge impact of death as life’s ultimate end. On the contrary, it strengthens the point that death will come whether we like it or not because it is a part of life.

In her poem, “after great pain, a formal feeling comes,” she describes death as something that comes after pain. In her words, the events leading to death are “First — Chill — then Stupor — then the letting go. ” We see that pain will come in the form of Chill, then a sort of inactivity in Stupor and as Death comes, there remains only the act of letting go. There is no dramatic portrayal of death here. Death is something commonplace and all we do is to let go. In “I Heard A Fly Buzz When I Died,” this sense of simplicity in death is seen in how the person dying is describing his last moments. I heard a fly buzz when I died; The stillness round my form; Was like the stillness in the air; Between the heaves of storm. ” In the first four lines, we see how emotionless the persona is as he describes his death. It is not a stirring event that is unfolding but rather, he is describing how still he has become. There is nothing but stillness in death that even a fly buzzing is heard. There is nothing left to say or show in death because death is still and quiet and a simple rite of passage. If we compare the anguish in “My Life Closed Twice Before She Dies,” it seems that there are two kinds of death.

However, if we look at it more closely, we see that death may be experienced as something with huge impact or something that is a part of life no different from other experiences. Irregardless, Emily Dickinson has shown how death is an ultimate ending to life and that we all go through it. There is a dual nature to Death. Death is not only the final event in one’s life. It is also the beginning of eternal existence in the afterlife for the one who died. Likewise, the experience of death of another person is momentary and does not stop life from unfolding.

This is Emily Dickinson’s second view of Death. She shows her idea of an afterlife in a lot of her poems. For example, in “My Life Closed Twice Before Its Close”, she ends the poem describing Heaven and Hell. In the line “parting is all we know of heaven; and all we need of hell,” she gives us a summary of her views of the afterlife. She uses parting to describe death in the first line. She says that the only thing we truly know of parting (or death) is that it is our way into heaven. There is a light tone to her words giving a sense of purpose to death as a gateway to heaven.

However, parting is then used literally in the next line. Her concept of hell is so gruesome that the only way she describes it is that we need to part from it. We see that her use of the word ‘need’ points to how much she detests the idea of being in hell after death. The use of ‘parting’ to describe how to get to heaven and how to get out of hell is clear and gives us her views of the opposite nature of the afterlife. Emily Dickinson also describes death as something that is unable to stop the flow of life.

This is especially seen in how she narrates her poem, “I Heard A Fly Buzz When I Died. ” Here, we see the image of a fly hovering somewhere near the dying person. This happens at the beginning of the poem. However, if we go on further, we see that this is also how the poem ends – with a person dead and the fly hovering nonchalantly. “…and then; There interposed a fly,; With blue, uncertain, stumbling buzz,; Between the light and me; And then the windows failed, and then; I could not see to see. ” The image of a fly is not random. It represents the things that are seen in everyday life.

More so, it can be interpreted as ‘everyday life’. And just as there is the daily lifestyle we are accustomed to before tragedies happen, we will also go on living after tragedies the same way the fly buzzes around after the death. And in “after great pain, a formal feeling comes,” Emily Dickinson describes the dead as being “remembered, if outlived. ” This suggests that although death happens as the final event for everyone, those who outlive us will remember us. And in this way, continuity is experienced even in the midst of death.

Emily Dickinson’s View of Death and the Afterlife. (2020, Jun 02). Retrieved from https://studymoose.com/emily-dickinsons-view-death-afterlife-new-essay 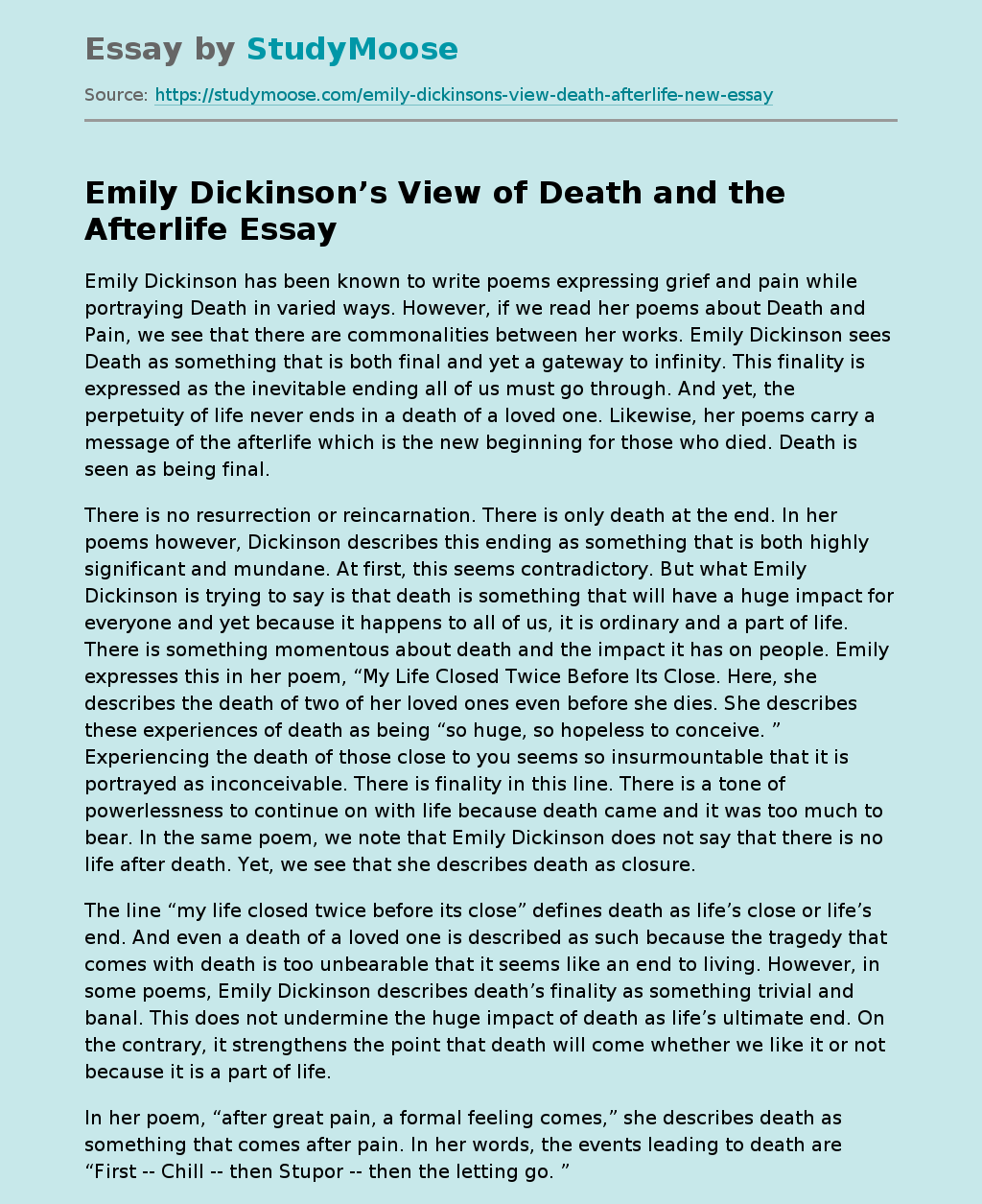