How To Discuss Hamlet's Attitude to Death and the Afterlife?

Hamlet a product of Shakespearean times has a different view on death, the afterlife and the divinity of the monarchy to any person today. Everyone in the Elizabethan and Jacobean era believed that there was an afterlife. Everyone believed in God, in witches, fairies and in ghosts. No one saw the dichotomy between their varied beliefs as we do today. Hamlet, as a result of the time in which he was raised, had a very complex attitude towards life and death.

Don't use plagiarized sources. Get your custom essay on
“ How To Discuss Hamlet’s Attitude to Death and the Afterlife? ”
Get custom paper
NEW! smart matching with writer

The Renaissance era said that there was, more to life than religion and although religion should not be discarded, other things should be considered. ‘Hamlet’ is a typical post-renaissance drama, with several plots interlacing frequently, to produce a complex composition giving meaning through contrast rather than unfolding each event in a single sequence.

It is through Hamlet’s turmoil about whether or not to kill Claudius that his views on religion and the supernatural appear. Although Hamlet wants to kill Claudius, he is prevented from doing so by his religious belief that God gives you life, therefore you have no right to take either your own life of that of another. This is also the reason why Hamlet cannot kill himself.

When Hamlet sees Claudius trying to pray, he has a perfect opportunity to kill him but he does not, due once again to the contemporary beliefs about death and the afterlife.

He believes that if he kills Claudius whilst he is praying his soul will go straight to Heaven even though he killed old Hamlet. Claudius’ prayers mean that he is in a state of perfect grace, with all his sins forgiven, so therefore, he will go to Heaven. Hamlet obviously does not want this. His father is forced to remain in purgatory and to suffer the misery of wandering the earth night after night because Claudius killed him while he was sleeping and unable to seek redemption.

It is not surprising therefore, that Hamlet does not want his stepfather to have the happy ending his father never got. As John Russel Brown says: 1’Within ‘Hamlet’, Shakespeare has created a hero who is compelled instinctively to seek and exact revenge and yet lives in a world created by an all-seeing all powerful, and merciful God. ‘ When Hamlet kills Polonius, he sees himself as ‘Heavens scourge and minister’, as if his violent and instinctive reaction had been in accordance with Gods will.

Such references together with various calls upon ‘God’ or ‘Heavenly powers’, remind an audience of secure moral judgements that call for repentance and mercy or for punishment. They mark the play as contemporary, not belonging to a pre-Christian Denmark, and ensure that Hamlet’s progress in revenge does not move him entirely from customary judgements even though he believes he could ‘drink hot blood’ and envisions evil spreading throughout the world. Therefore here Hamlet is showing that although he is a good Christian follower, he seeks revenge for the murder of his father.

Laertes, another character to lose his father and his sister, who are both related to Hamlet in one way or another, deals with his feelings for seeking revenge in a very different way to Hamlet. Although at first Laertes believes that Claudius killed his father, his reaction to his father’s death differs greatly. Laertes does not care about morals very much: To hell, allegiance! Vows, to the blackest devil! Conscience and grace, to the profoundest pit! ‘ He is prepared to go to Hell to get revenge for his father’s death. He then continues to say. ‘I dare damnation.

To this point I stand. That both the worlds give to negligence, let come what comes; only I’ll be reveng’d, Most throughly for my father. Laertes is saying that he does not care what the consequences are, he will seek revenge even if he has to damn his soul to get it. Laertes decides that he will murder Hamlet, by poisoning the dagger he will be fighting him with. This, he knows, will definitely lead to Hamlets death. Laertes makes a decision and sticks with it, unlike Hamlet who is considered insane around the time he is thinking about killing Claudius.

Hamlet is even considering taking his own life; therefore Laertes would appear to be the more stable of the two. However, much of Hamlet’s procrastination lies in the fact that he intellectualizes the moral issues involved in life and death, good and evil. Both characters end up with the same fate; death. Laertes behaves like a typical hero of a revenge tragedy, rushing headlong into revenge and his own death without pausing to weigh the consequences of his actions. When old Hamlet appears, Hamlet questions whether or not to believe it is his father.

Hamlet is in a very emotional state, he is thinking of suicide due to his father’s death, and now he has appeared before him, it is little wonder that he is shaken up. Hamlet’s indecisiveness as to whether the ghost is really his father, is seen when he says ‘I’ll call thee Hamlet, King Father, royal Dane’, until he hears otherwise. He is wary because it was believed at the time that ghosts brought evil and were not good however, because the ghost so resembles his father and because Hamlet mourns him, he is prepared to believe that it is an honest ghost.

The ghost confirms his identity, to Hamlet by saying ‘I am thy Father’s spirit, Doom’d for a certain term to walk the night, And for the day confin’d to fast in fires, Till the foul crimes done in my days of nature Are burn’t and purg’d away’. Once again, the audience learns something about Jacobean religious views and beliefs. Old Hamlet is telling us that due his being murdered so quickly, he did not have time to repent his sins, and therefore he is stuck in purgatory the place between Heaven and Hell until God forgives them.

However Hamlet and Horatio are both men with high academic achievements, and both scholars, therefore it would be unlikely they would imagine such a thing. Both of them see the ghost on the battlement as do Barnado, Francisco and also Marcellus who sees its appearance as a sign that something is rotten in the state of Denmark. Although Gertrude never sees the Ghost, its validity and existence is proven by the fact that both Hamlet and Horatio have seen it.

2 The fact that Gertrude has an inability to see the Ghost might suggest the fact that she had nothing to do with the murder of old Hamlet or that she is too insensitive to see it – an idea born out by her insensitively speedy marriage to Claudius. This also appears to be the case in MACBETH another of Shakespeare’s plays, in the banquet scene, when the guilty Macbeth sees the ghost of Banquo but no one else does. As a result of the information Hamlet receives from his father about his death, and his mother’s behavior, Hamlet feels that life in Denmark is worthless.

He feels now with the death of his father, and the incestuous he feels relationship between his mother and Claudius, that his life is also meaningless and worthless thus he discusses committing suicide. ‘O, that this too too solid flesh would melt, thaw, and resolve itself into a dew’. He then describes how distraught he is that his father was only dead a month when his mother got married to Claudius, and how he must ‘hold his tongue’. In spite of this he cannot kill himself because God gave him his life, therefore he has no right to take it. ‘The Everlasting ‘has’ ‘fixed / His canon gainst self-slaughter’.

How To Discuss Hamlet's Attitude to Death and the Afterlife?. (2017, Jul 29). Retrieved from http://studymoose.com/how-to-discuss-hamlets-attitude-to-death-and-the-afterlife-essay 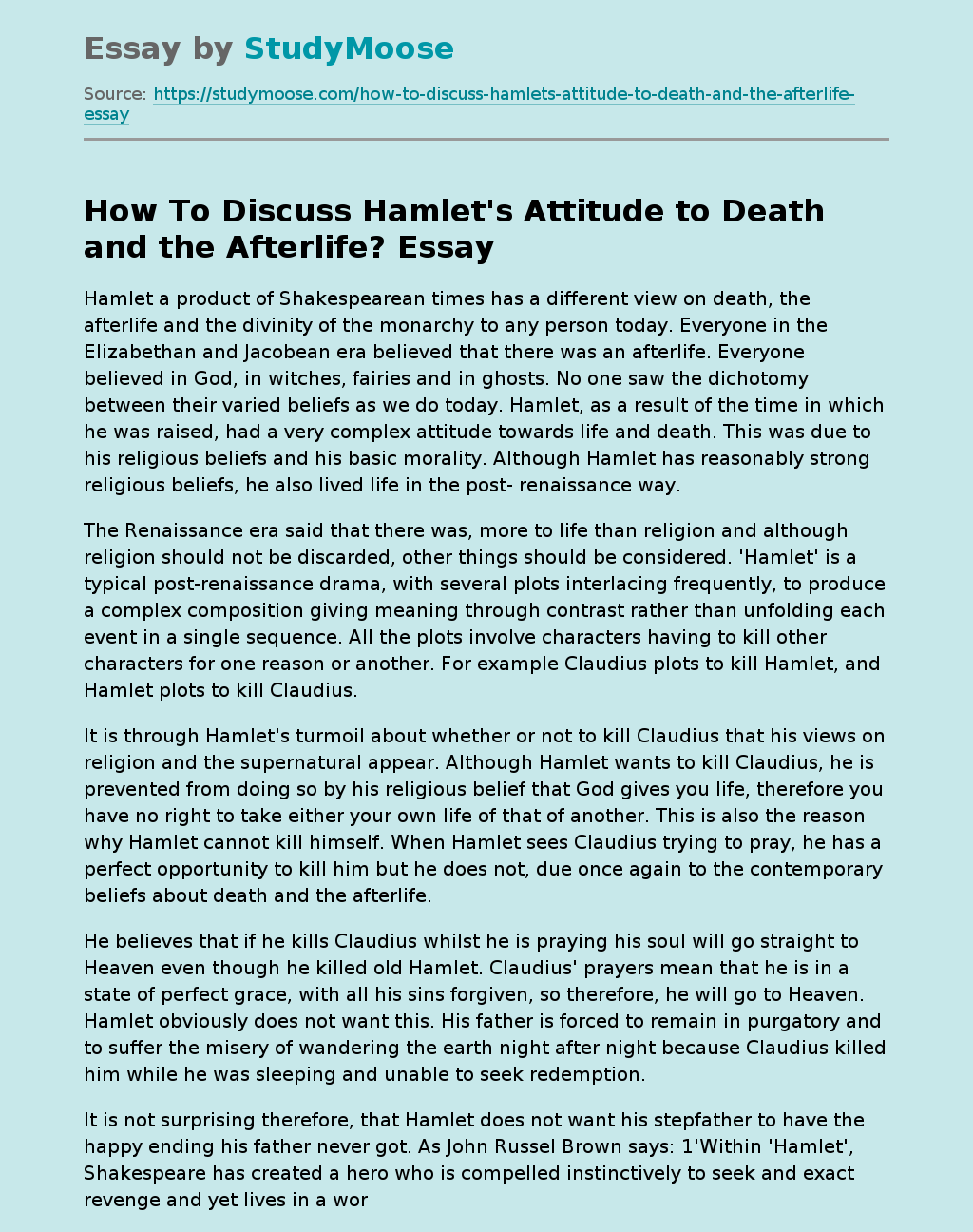