Don't use plagiarized sources. Get your custom essay on
“ Poetry of Emily Dickinson and Walt Whitman ”
Get custom paper
NEW! smart matching with writer

Emily Dickinson’s life differs greatly from the life of Walt Whitman, although they lived during the same time period. Walt Whitman published practically all his poetry during his lifetime, but Emily Dickinson only published seven of her poems during her lifetime. Actually, her poetry wasn’t published until after her death.

The forms each poet used are different as well. The rhyme in the poetry by Whitman is drastically different from the poetry written by Dickinson, because Whitman didn’t use any rhyme. Emily Dickinson grew up in Amherst, Mass, and Walt Whitman grew up in New York City, New York; this is one way that these poets’ lives differ. The main people that influenced Emily Dickinson were Ralph Waldo Emerson and Emily Bronte.

Walt Whitman was influenced by many people, some of which were: Elias Hicks, James Macpherson and William Shakespeare.

Whitman read many book reviews by many people; from these, he realized Emerson was very influential. Whitman was also influenced by the Bible, his walks in New York City, Tom Paine, and a strong love for music. After Whitman started preparing to be a poet, he said he was merely “simmering,” but the ideas of Emerson brought him to a “boil.” Dickinson wasn’t addressing anyone in particular through her poetry, but Whitman addressed the citizens of the United States, most of the time, through his writings. After reading “The Poet” by Emerson and seeing how he defined the role of the poet in democracy, Whitman was eager to assume that role. Whitman loved to have his picture taken and there are many pictures of him. Dickinson only allowed her picture to be taken once and did so reluctantly. Neither Dickinson nor Whitman got married, but both had people interested in them or people they were interested in. Emily Dickinson started writing poetry in 1850, but most of her poems are dated after 1858. Whitman wrote for many newspapers before he actually began writing poetry. The world found out he wrote poetry when he published the first edition of Leaves of Grass.

The major turning point for Whitman was in the 1860’s, when his work started to gain more recognition from critics. Eighteen sixty-two was the major turning point for Dickinson’s life; 1862 was when she wrote most of her poetry. She was writing about one poem each day. During the year 1862, the man Emily Dickinson loved left for San Francisco. After he left, she started wearing only white, and during the last ten years of her life she didn’t leave the comfort of her home. The last years of Walt Whitman’s life were spent revising and writing poetry. Emily Dickinson stayed very close to her family, but Walt Whitman traveled and lived alone toward the end of his life. The forms that Dickinson and Whitman used are also different because both used new and innovative ideas in writing their poetry.

Walt Whitman used no real form other than free verse. The characteristics of free verse are:

Whitman’s use of free verse marked a break in the syllable-stress tradition. In his poetry he didn’t count the syllables stresses, or feet, in the long lines of poetry. Whitman used the item of anaphora, which is the use of repetition at the beginning of back to back verses, and the repetition of syntactical units. Walt Whitman was a 20th-century innovator of poetry because he used nonmetrical prosody. Whitman got most of the techniques of writing poetry from biblical verses. He often used parallelism like in the Psalms. Parallelism is the use of phrases, clauses, or sentences that are similar or complementary in structure and meaning. Whitman often used regular metrical sequences but the lines cannot be measured by the graphic method of marking syllables and feet.

The following lines from the poem “Out of the Cradle” should portray the slow lengthening of lines and the sudden diminution of the line length. The lines also show the repetition of the word carols and the alliteration of the s sound. He also used falling rhyme in the words “lagging,” “yellow'” and “waning”: Shake out carols! Solitary here, the night’s carols! Carols of lonesome love! deaths carols! Carols under that lagging, yellow, waning moon! O under that moon where she droops almost down into the sea! O reckless despairing carols. The following lines from “Beat! Beat! Drums! ,” include parallel phrases, sentence structures and meaning: Beat! beat! drums! – blow! bugles! blow! Make no parely – stop for no expostulation, Mind not the timid -mind not the weeper or prayer Mind not the old man beseeching the youngman.

In nearly all of Emily Dickinson’s poetry there is the use of quatrains of three iambic feet, that is four lines of poetry to a stanza, where each line has an unstressed syllable followed by a stressed syllable, three times. The early poems by Dickinson are conventional in sentiment and in form. She used many forms in her poetry, but the forms she used had a twist from the normal because she would make them more complex and altered the metrical beat. Dickinson did this to fit her thought. Dickinson also started the wide use of off-rhyme. The subjects that Whitman and Dickinson used in their poetry are very different. There is a big difference because the things that each poet was interested in.

Whitman often wrote about the Civil War. Dickinson often wrote about death and nature. The punctuation is drastically different as well. Whitman used mostly traditional punctuation in his poetry, but in the poem “Beat! Beat! Drums!” he used a big amount of dashes: “Beat! beat! drums!-blow! bugles! blow! Through the windows-through the doors-burst like a ruthless force.” Dickinson used a form of punctuation unique to her poetry as well as capitalization. She used irregular capitalization to emphasize certain words for example, in the poem “This is My Letter to the World,” she capitalized the words, World, Me, News, Nature, Majesty, Message, Hands, Her, and Sweet. She did this because those things were important to her. Walt Whitman’s and Emily Dickinson’s lives were very different, although they lived during the same time period. Each poet chose to be around certain people and things. Those people and things they chose to be around greatly influenced their poetry. The forms and subjects are different because they liked writing about things that happened in their lives. They are both innovators in poetry because they chose to change common things in writing poetry. 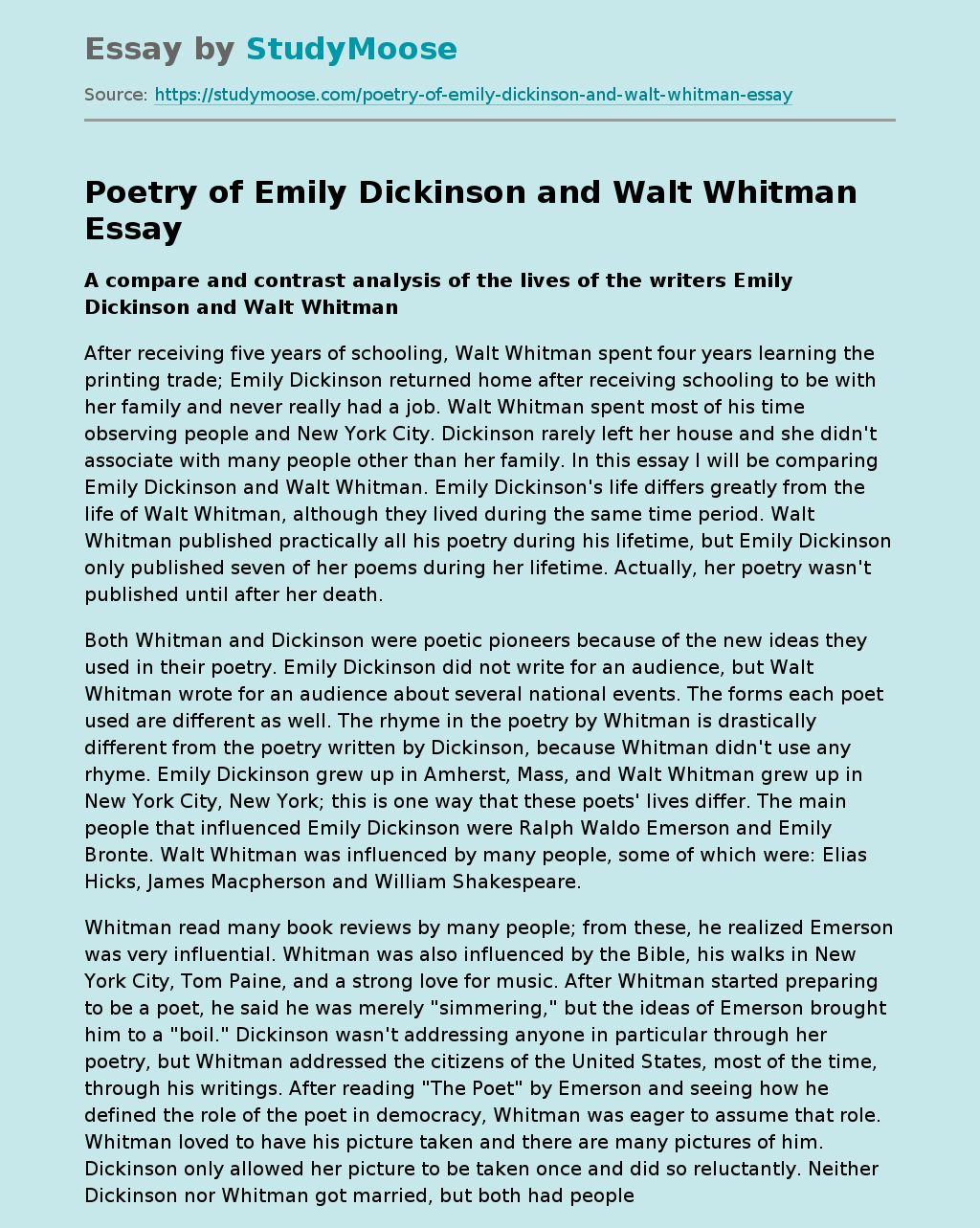