If movies matter not just as works of art but also as events, not purely aesthetically but also socially and culturally then Steven Spielberg’s Schindler’s List may be one of the most important American films ever made. Schindler’s List seemed to both catalyze and crystallize an international conversation about genocide and memory, while marking a decisive turn in its director’s career: it debuted just months after the opening of the Holocaust Memorial Museum in Washington, DC and the release of Jurassic Park, which in becoming the most successful motion picture in history cemented Spielberg’s status as our most significant popular filmmaker.

Don't use plagiarized sources. Get your custom essay on
“ If movies matter not just as works of art but also as events ”
Get custom paper
NEW! smart matching with writer

He would go on, the following year, to finally win the Academy Awards for best director and best picture that had previously eluded him and also to found the Survivors of the Shoah Visual History Foundation, a nonprofit organization with a mission of videotaping survivor testimony about the Holocaust.

Spielberg’s movie, meanwhile, became a landmark, so revered that there was a nationwide controversy when twenty Oakland teens laughed during a screening of it; so monumental that the Ford motor company would later sponsor a national television broadcast of the film without commercial interruption; so hallowed that its cultural sanctity would become the butt of a joke on an episode of Seinfeld.

How could anyone laugh during . . . How could a corporate sponsor interrupt . . . How could Jerry and his girlfriend make out at a screening of . . . Schindler’s List? From the moment it premiered, Schindler’s List was more than a movie; it was a creative act through which the country’s most influential purveyor of mass entertainment somehow managed to transcend the crassness of the “popular” to make a “work of art.

” It is not an overreach to assert that it almost seemed to redefine what a Hollywood movie could be: Schindler’s List instigated a collective memorialization of a historical trauma so large in scale that it had previously been deemed incomprehensible.

How can one memorialize the incomprehensible, though? If this question rarely entered into the mainstream discourse around Schindler’s List, it generated furious academic debates and fueled a staggering volume of essays and articles by scholars, theorists, filmmakers or at least, Claude Lanzmann and intellectuals, and even led to a mixed-to-critical anthology entitled Spielberg’s Holocaust interrogating Spielberg’s motives and his movie’s dramaturgy and ethics (note the way the book’s title implies that the movie functions as an assertion of ownership, a kind of co-opting of the Holocaust). The questions Spielberg’s critics raised were many, and for the most part, they were and are worth asking. Among the most common: How does one represent the unrepresentable? Is it acceptable to make a movie about the Holocaust that tells a story of survival? Is it permissible for such a movie to have a Gentile as a protagonist? Is Schindler’s List anti-Semitic in its depiction of Jews as largely undifferentiated (perhaps feminized, maybe greedy) victims? On the other hand, is Schindler’s List offensive in its blatant Zionism? Or most dubiously, in failing to show us the gas chambers even as it hints at them luridly is it possible that Schindler’s List is less a great act of memorialization than an elaborate exercise in Holocaust denial?

So much ink has been spilled by intelligent writers on these subjects that it hardly seems worth it, in a few thousand words, to directly tackle all or any of these questions. At this point, the rigorous scrutiny of Schindler’s List that has taken place in the years after its release is perhaps best seen as a reflection of the movie’s singularity and of Spielberg’s unique stature as a popular artist and public figure it should not be surprising that other recent Holocaust pictures like Roman Polanski’s The Pianist and Roberto Benigni’s deplorable Life Is Beautiful were greeted with neither the same deference nor comparable resistance. Because of its unrivaled stature, though, Schindler’s List, some two decades after it redefined Spielberg as an artist and as a cultural figure, as well as the American public’s relationship to the Holocaust, has become almost unapproachable.

Indeed, Schindler’s List, as a film, has gotten lost somewhere between the reverence characteristic of its popular reception and the highly charged, theoretically driven criticism it received elsewhere. In the years since its release, it has become increasingly easy to simply talk around it, to hurl vapid superlatives or to use a scene or an aspect of the movie to make a theoretical point, rather than to grapple with the messy whole. I’d like to attempt the opposite approach. Instead I’d like to try, to whatever extent possible, to write about Schindler’s List as a movie. Many of the questions already raised by others will almost certainly come up; few of them will be resolved. But if it is worth writing about Schindler’s List in 2012, after the zeitgeist has moved past it and the academic debate has played itself out, the value of such an exercise can only lie in revisiting the film as a film with a new social, cultural, and intellectual context in which to frame it. In the interest of full disclosure, though, I must say at the outset: this is a movie that is too big, too brilliant, too problematic, and too challenging to ever get one’s mind around; one can only hope there is something valuable to be gained, for the writer and reader alike, in the effort.

If movies matter not just as works of art but also as events. (2019, Dec 20). Retrieved from https://studymoose.com/if-movies-matter-not-just-as-works-of-art-but-also-as-events-example-essay 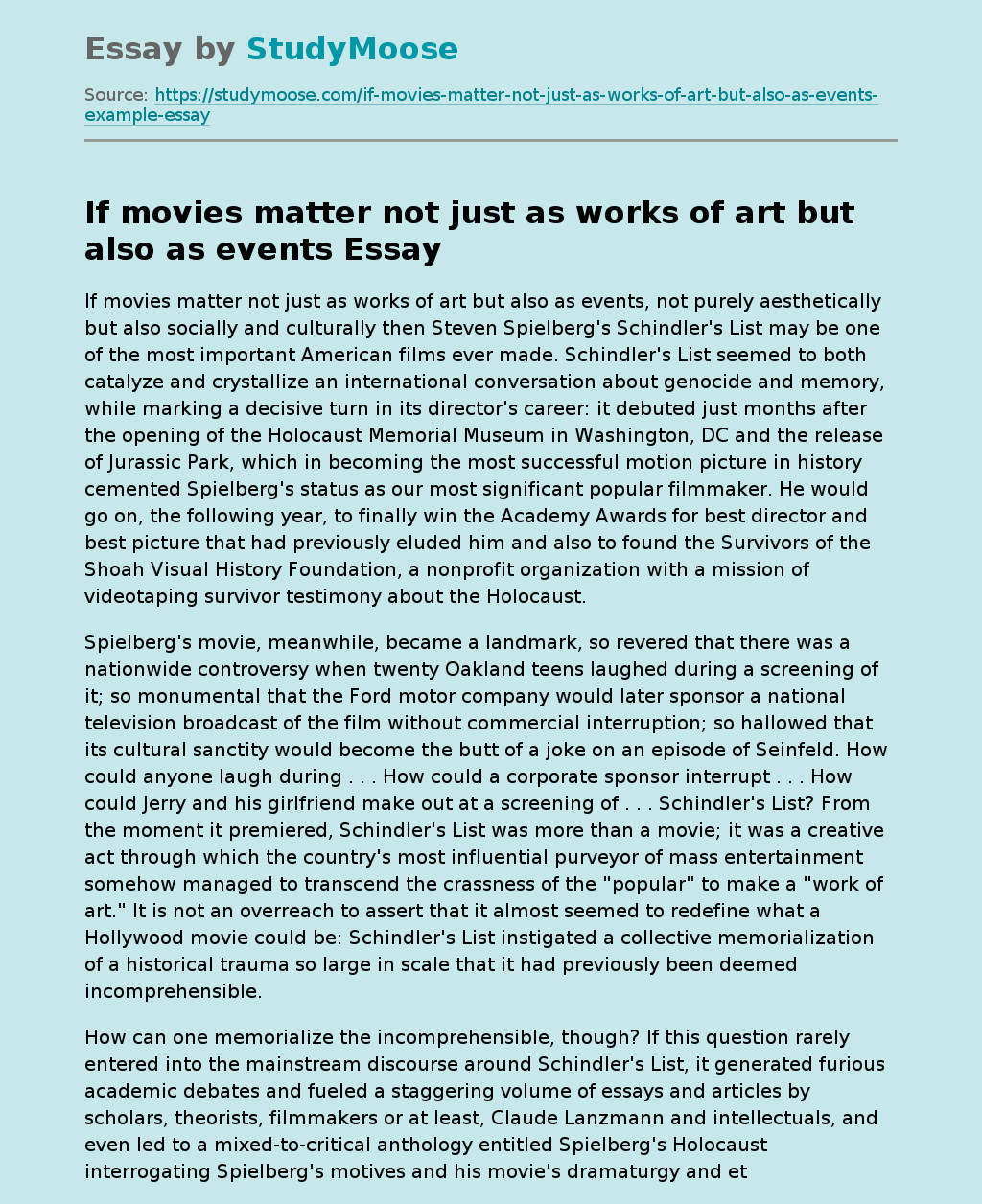