Identity Shaping in The Outsiders

Constructing and shaping one’s identity can be done through many personal experiences. One way is how you react to and interact with others. Also, turning points in your life and how they affect you can form your identity. Ponyboy Curtis, from S. E. Hinton’s The Outsiders, and Mark Pfetzer, from his own story, Within Reach My Everest Story, are great examples of people shaping their own identities. Ponyboy and Mark are both very supportive, kind teenagers. I believe this because they both stood by the people they cared about.

Don't use plagiarized sources. Get your custom essay on
“ Identity Shaping in The Outsiders ”
Get custom paper
NEW! smart matching with writer

For example, Ponyboy stayed with Johnny after Johnny killed Bob, the Social. Although Ponyboy didn’t kill him, he stayed with Johnny to help him through the tough time. When Johnny went to the hospital after saving children from a burning building, Ponyboy stayed at the hospital for a long time and visited him everyday until he died. For Mark, even though he really wanted to summit Everest, when he found out that his dad’s cancer had spread to his brain Mark decided to stay home to support his father.

Some great turning points for Ponyboy were when he talked to some of the Socials. I believe this because while talking to Sherri, he realized that money wasn’t the only thing that separated them. While they were walking to Two-Bit’s car, she told him that it was also their morals. She said, “You’re more emotional. We’re sophisticated-cool to the point of not feeling anything. ” Talking to Randy was a turning point because Ponyboy learned that money doesn’t always make you happy.

While they were in Randy’s car, talking, Randy told Ponyboy about Bob’s parents and how they gave Bob whatever he wanted and never blamed him for anything, but what he really wanted was for his parents to say no to him; give him limits. Randy helped Ponyboy realize that Socials didn’t have it all and Ponyboy might not have disliked them as much as he did before. Sherri and Randy both taught him a valuable lesson. The first time Mark Pfetzer climbed the rock wall was a major turning point in his life. I feel this way because after he climbed the first wall he loved the feeling of it.

This made him more interested in climbing. For example, Mark climbed another time at Alton Jones. He also began reading and trying to learn more about climbing. Mark started climbing at a rock gym even though he was too young. Soon he started climbing mountains and continued to try and reach his main goal, to summit Mount Everest. In conclusion, one’s many personal experiences can help construct their identity. Ponyboy and Mark are two very different characters from books that seem very different. However, they both shape their identities through their experiences in life.

Identity Shaping in The Outsiders. (2021, Jun 02). Retrieved from https://studymoose.com/identity-shaping-outsiders-8516-new-essay 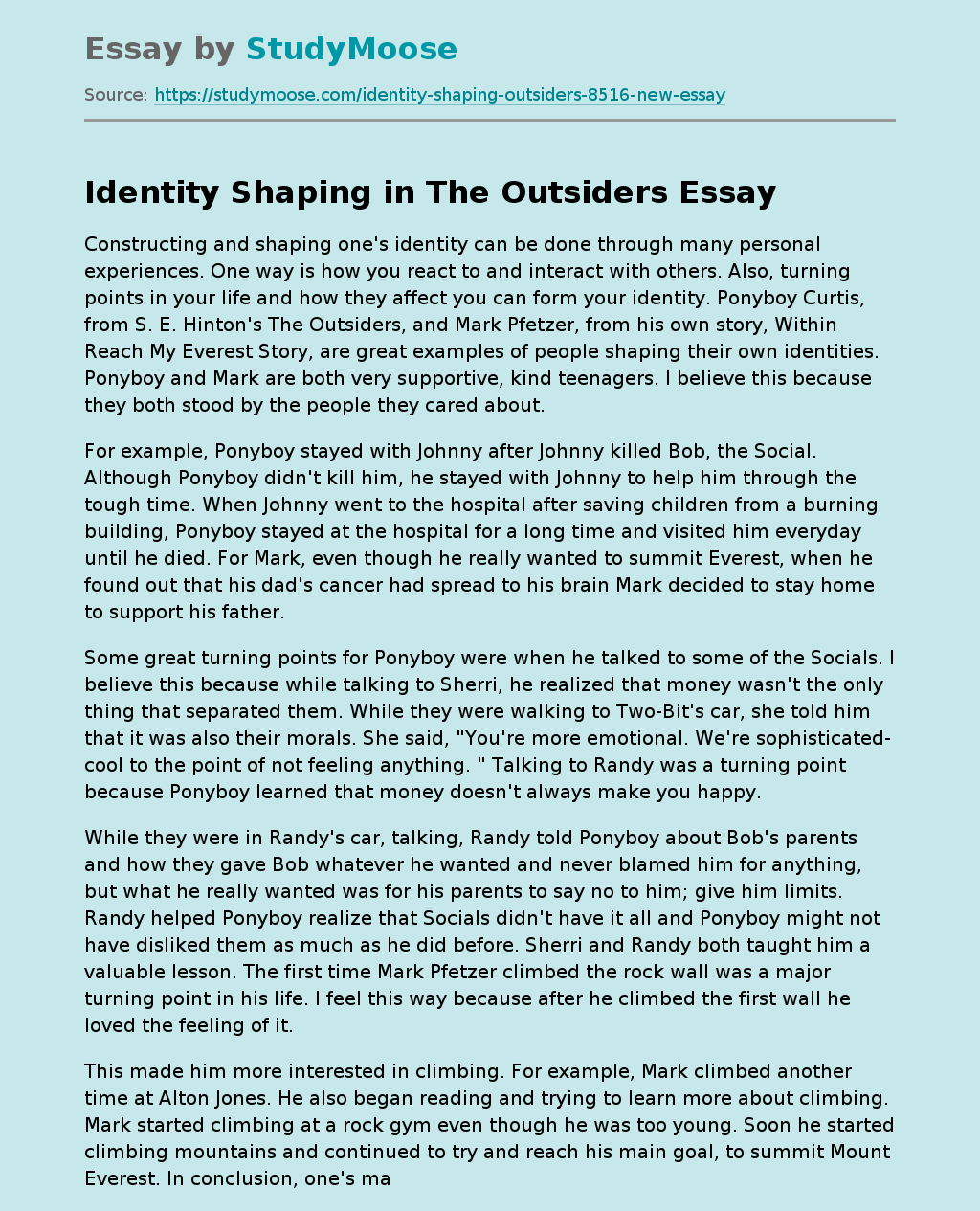