Don't use plagiarized sources. Get your custom essay on
“ IBM Corporation Turnaround ”
Get custom paper
NEW! smart matching with writer

However, the company expanded incautiously resulting in increased overhead cost; although profits were soaring but gradual change in demand by the end of year 1990 create significant financial problems for company depicted in huge losses for the consecutive three years. This case identifies the reasons which root to IBM condition in 1990 and sequential pattern of changes in structure which affected the financial performance of company. This case classifies the role of management in IBM performance and associated impact of overhead on company potential to grow.

Basically, this case categorizes the problems which plunged the IBM to move towards failure and associated role of management. Situation Analysis of IBM under John Akers Leadership IBM was controlling approx. 70% profits of global technology industry in 1980s beginning era. However, during the last years of decade company was encountered with serious problems that affected the performance of company. John Akers, CEO of IBM appointed in year 1985, created significant changes in organization structure and work settings; defined new setting of decision making and operational procedures conforming his attitude and behavior.

IBM overhead costs were momentous to industry average cost; overhead costs were three times of industry, company was offering high perks and benefits to employees, majority of employees were detrimental to work requirement, executives were not fully productive and were relying on junior members to perform their duties (creating unnecessary employment). Company had 125 data centers globally; internally organization was not proficient in IT management resulting in bad performance of IBM.

Research department of IBM appeared unable to design products in consideration of customer demand which created significant problems in the beginning of 1991 (Hitt et al. , 2007), pushing company towards change in management structure, and requiring large scale operational change in organization to cover up its cost from current demand level. SWOT Analysis of IBM IBM is operating globally leading the industry with its unmatched solution compare to competitor’s offerings remarking the business performance. A brief SWOT analysis of IBM is as under:

Strengths IBM offers a range of solutions to numerous businesses which differentiated it from competitors. IBM was dealing in mainframes, mainframe storage, single user personal computers, minicomputers, and client/server solutions. Company was soaring high profits from the industry, therefore spending high amount on R&D to invent and design products in consideration of future demand (Hitt et al. , 2007). IBM has strong brand image which increases the company sustainability and efficiently penetrate in competitive markets.

Company had effective teams of personnel; reach to customers was valuable due to high value propositions. Weaknesses IBM was following bureaucratic structure and senior executives were running the operational decisions; limited decision making power reduced the innovation and hindered the growth of company. Company had employed unnecessary people to fulfill job tasks, increasing the cost. However, senior management members were relying on junior/support members for reporting purposes which resulted in refined information flow necessary for organization function irrespective of challenges that can be faced in long run.

Executives’ remuneration was very high compare to services in return to organization; overhead costs dramatically increase as different competitors entered in industry (Hickman, 2006). IBM did not focus on offering of browser and network integration application which revolutionized the industry in early 1990s; however investing in OS/2 operating system resulted in financial losses. Opportunities IBM being one of the giant leaders of technology industry secures high profits and market share. This provides company an opportunity to overtake small business entities to offer diverse and complete range of products to customer (one stop solution). 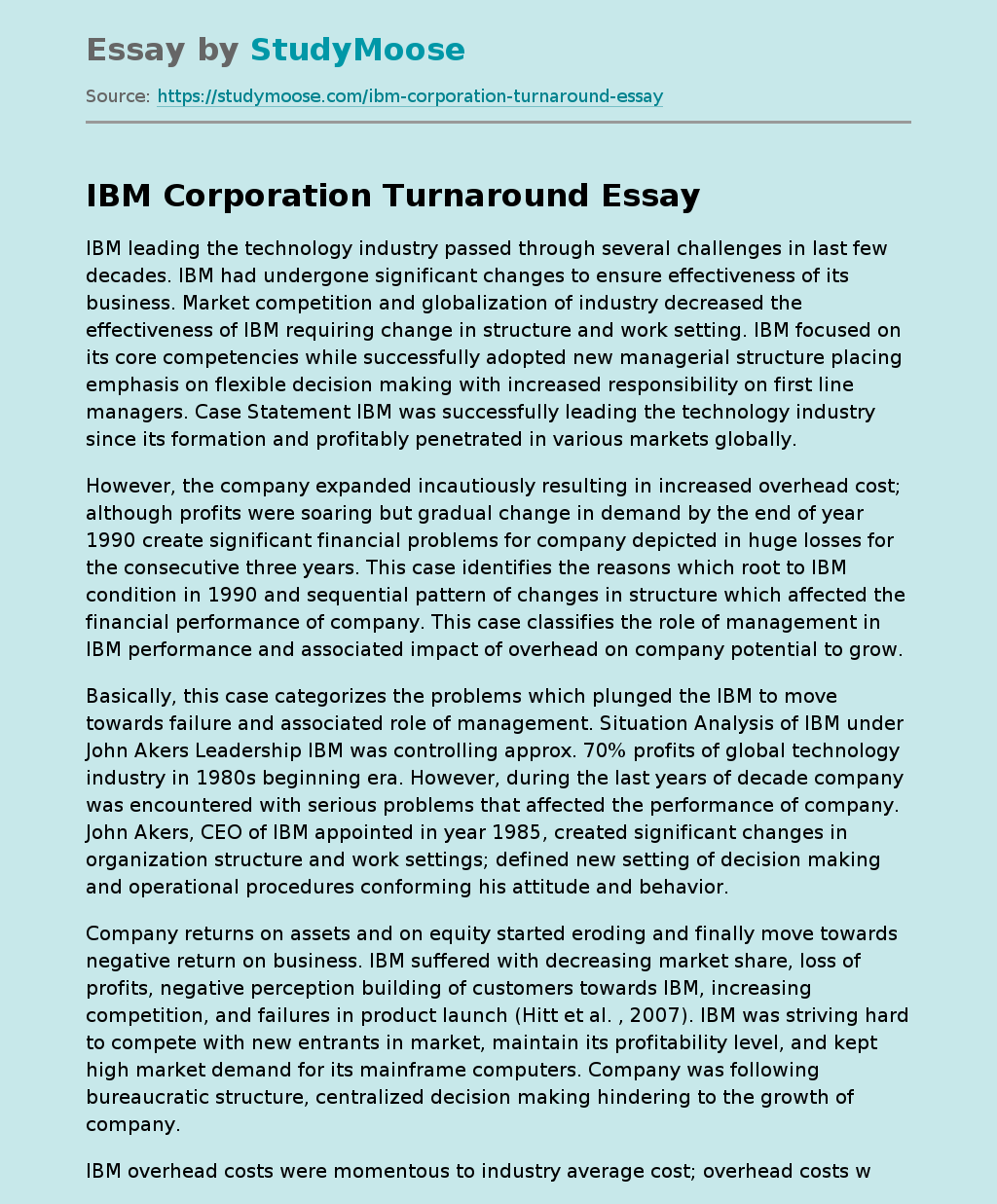