IBM operates primarily in a single industry using several segments that create a value by offering a variety of solutions that include, either singularly or in some combination, technologies, systems, products, services, software and financing. This may lead you to believe that IBM has adopted a corporate level strategy of concentrating on a single business unit, but this is only half the picture. For IBM there is not one general type of corporate strategy that best suits their needs, but a combination of both a concentration on a single business strategy as well as a vertical integration strategy.

A single business unit strategy means that IBM is concentrating on competing successfully within the confines of a single business unit. An advantage of choosing such a strategy is that the IBM can focus its total and collective resources to dominating and becoming successful in this business area. If IBM were to attempt to pursue some other strategy such as diversification, they might spread their resources out too thin, thus inhibiting them from taking advantage of some other opportunities that may come about due to a lack of available resources.

Another advantage to pursuing a single business unit strategy is that IBM is remaining within an area with which it has a great deal of competence and experience. This decreases the likelihood of IBM partaking in a venture that may be unsuccessful and it keeps IBM in an area where their existing capabilities and resources can contribute and add value.

But concentrating on just one business area may not be enough and so as previously stated, IBM has also adopted a corporate level strategy that involves vertical integration.

Vertical integration can be seen in the corporate level strategy of IBM in their acquisition of various inputs such as the LSG Group Inc., which offers services ranging from application development to information technology consulting. This is known as backward or upstream integration. Choosing a strategy such as vertical integration generally gives a company a competitive advantage by improving scheduling, by creating efficiency-enhanced assets, by protecting product quality and by enabling the company to build barriers to new competition.

IBM operates in more than 150 countries worldwide and derives more than half of its revenues from sales outside the United States. IBM has adopted an international strategy with respect to how it plans to compete and operate globally. By adopting an international strategy IBM looks to create value on a global basis by transferring valuable skill and products to foreign markets where local competitors lack those skills and products. Although much of IBM’s revenues come from overseas sales, they tend centralize the majority of the decision-making and other company functions right her in the United States. This means that they first develop marketing and product decisions in the United States and then transfer what they have done in the United States to other countries.

This does not mean that no adaptation was done at all but it does mean that any adaptation that may have been done was kept to a minimal. In many cases the modifications IBM may carry out with respect to its business decisions in a particular market may be due to the laws and policies in a particular country. IBM could also be forced to modify its business decisions in a certain country due to the economic and political changes in those countries and by macroeconomic changes, including recessions and inflation. An example of this would be when a weakness in the economy of Asia had an adverse effect on the companies business in 1998 and forced it to change its strategy with respect to that market while the countries economy got itself back together. 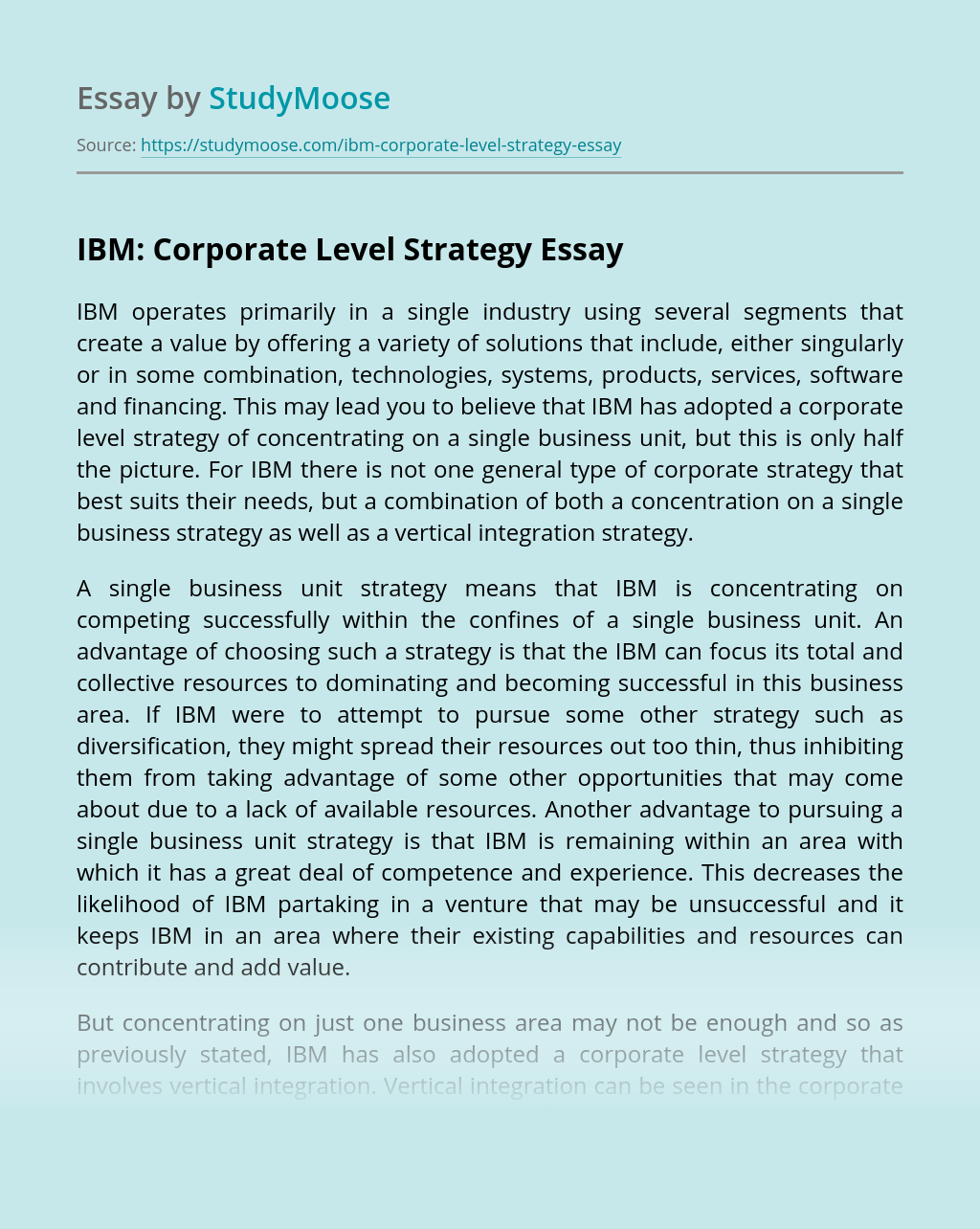