Turnaround at the Preston Plant

The Preston plant of Rendall Graphics was located in Preston, Vancouver. The plant was bought from the Georgetown Corporation by Rendall in March 2000. The plant produced Precision coated papers for ink-jet printers which accounted for the majority of the plant’s output. The plant started to experience problems in the quality of their output of the ink-jet paper and had received feedback in late 1998 from Hewlett-Packard (HP) about the problem. The team at Preston worked to resolve the problem and in October of 1999 made recommendations for a revised and improved coating formulation.

Don't use plagiarized sources. Get your custom essay on
“ Turnaround at the Preston Plant ”
Get custom paper
NEW! smart matching with writer

However in 2000, productivity, scrap and re-work levels continued to be poor. Operations Management team’s response was to increase the speed of the line and made a number of changes to operating practice in order to raise productivity. In the spring of 2000, two significant events happened to the Preston plant. Rendall Corporation purchased the plant, even though it was losing around $2 million a year. Rendall was not impressed by what they found at the plant and it seems that they did not do a very good analysis of the overall operations of the plant and the management of its operations.

Although there reports were produced with each batch shipment, it seems that the Preston team did not pay as much attention to the reports as the HP team did. Tom Branton was named Managing Director for the Preston Plant in 1999. His response to the mounting crisis was to go back to the conditions and events that had taken place in late 1998 and into 2000. Tom, had the operations team working on ways to implementing unambiguous “shut-down rules” that would allow operations to decide under what conditions a line should be halted if they were in doubt about the quality of the product they were making.

The current process is that production would continue regardless of the quality and once the product came off the line they would dispose of it and in one case it cost them $100,000 in lost product and in profits. The plant really lacked a process where there was a continual quality check in place to ensure that the paper they were producing was flawless. The company did not have adequate guidelines in place for the employees and the employees did not feel empowered to make decisions even though they knew there was a problem but would not shut down the machines to inspect the issue. The plant also lacked good communications between the operations department and the production team. For the first time ever the production teams started having daily meetings, they would review the control chart data. This started to really show a collaborative effort as it helped them to identify the issues at hand and become more of a team no matter what shift they worked on.

They also went a step further and invited HP to the meetings, this really showed they were listening to the customer and by inviting them into help resolve the issues showed that they valued HP’s feedback and this provided HP with the feeling of inclusiveness in solving the problems. With all the changes the management team was putting into place they started to see some positive turnaround from the employees, quality was going up, production costs were coming down, and moral on the floor was starting to improve. In late 2000, the Randall Corporation had made a decision to shut down the plant, but the team stayed positive and figured that if they kept improving quality, cut costs, and, create a portfolio of new product ideas they would reconsider shutting down the plant. When they looked at the quality piece they decided the needed to establish a full statistical process control along with this they should also be implementing a TQM process, this will help in assessing the cost of controlling quality.

They would look at prevention costs, appraisal costs, internal failure costs, and, external failure costs. If they put a TQM process in place and stick to it, this will help them go for a reactive mode to a proactive mode and will help in establishing the policy and guidelines within their operations and production departments. The pulp and paper industry is very energy intensive, requires extremely large amounts of water, and often entails the use of toxic chemicals, of which the most problematic are the chlorine compounds used in bleaching pulp to make bright white paper. Some of the ideas that the team might think about looking into is looking into recycled fiber, increasing its use of post-consumer recycled paper, improving the efficiency of its use of energy and water, and completely eliminating chlorine bleaching. The case study did not really give much insight into their environmental concerns/actions.

Turnaround at the Preston Plant. (2016, Jun 08). Retrieved from https://studymoose.com/turnaround-at-the-preston-plant-essay 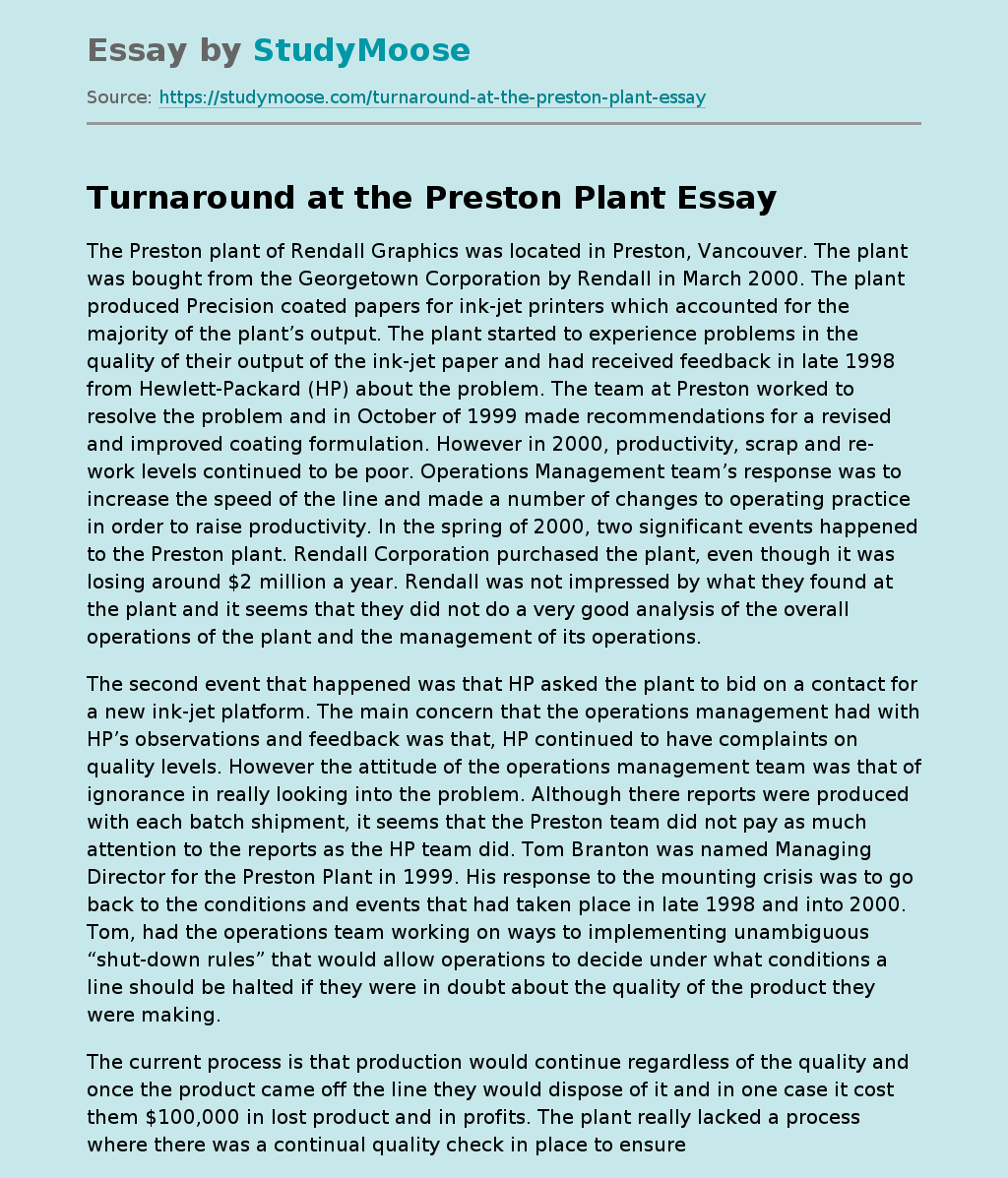