In this highly luxurious extravagant world, food and other beverages has always been one of the things which maintain the mainstream of life. Aside from being one of the basics for survival, gatherings are also made perfect by food preparation and stress is now often associated with food. This activities show that food intake nowadays is far different from the conventional times. Furthermore, this lavish lifestyle most of the people have results in an unhealthy body. On the other hand, poverty and starvation is widespread throughout the whole country.

Diseases are common and nourishment is worst. People of this class only earn enough for their basic necessities or even lesser. Some cannot merely afford buying medicine and ignore the complications they have. In response to this situations, the researchers have decided to make a common commodity, juice, out of a native herbal source, cobra vine (Ipomoea nil).

Idea of the product

The researchers addressed the problems with costly medicines.

They have decided to make a better and proven alternative. Cobra vine, a native herbal plant, is well known for its medicinal capabilities. It is a perfect alternative in the form of juice.

Research of the product

The plant serves as replacement for costy medicine. Based upon the interviews and research, cobra vine seeds produce an alternative low cost and environmental friendly medicine. Since cobra vine plant is commonly found in our locality, it’s never hard to produce such. In the next page is a table showing some of the native procedures in curing diseases.

Ipomoea is a group of perennial or annual vines as well as evergreen shrubs and perennials. The vine requires support, full sun and humus rich soil. They are frost tender at 45-50F. Red spider mite and white fly can occasionally cause problems. Can be propagated through spring seeds or summer cuttings. They are not related to convolvus arvensis. This annual sometimes taken as perennial in tropical climates, blooms from summer to winter, funnel shaped flowers with purple or red petal lobes (between the edge and midway). Foliage is green on hairy, green stems. Early call is an annual that blooms in white tubes with red tubes in the edge of the midrib. Ipomoea is obviously a flowering plant. It is a vine with long slender stems and simple leaves that occur in pairs. It has an extensive root system.

The project investigates the effectiveness of cobra vine needs (Ipomoea nil) as anti-neurotoxin. The cobra vine seeds were extracted using the solvents ethyl acetate and methanol, and in another set, by methanol and toluene. The filtrates were then dried separately in vacuo and attached to a ROTAVAP apparatus. The gastrocnemius muscle of a frog was used to determine the activity of both the cobra toxin and antivenin in 5 different time intervals in the first experiment and 2 time intervals in the second experiment using a Kymograph. The amplitude (mm) of muscle contraction was measured in the kymograph at regular intervals. The amount of toxin and antivenin applied were the parameters used in determining its effectiveness as anti-neurotoxin.

Out of the kymographic study, clear pictures of the cobra toxin and antivenin action were presented. In the first experiment (solvents Methanol and Ethyl Acetate), within twenty minutes observation period after injection of the venom, the muscle became less responsive to the four volts stimulus as shown in the decreasing amplitude (Plate 8). Twenty minutes after injection of the cobra toxin, the antivenin was injected. The muscle, which was almost paralyzed, contracted vigorously that brought back even higher than normal contraction of the muscle, as shown in Fig 1. The second experiment consists of three set-ups; set-up 1&2 (Fig. 4&5) as the action potential determiners of venom and anti-neurotoxin and set-up 3 a combination of both set-ups. Set-up3 showed the same inhibitory action for the venom and staircase effect after the antivenin was injected, which had a milder effect than the first one (Figs. 2,3,4)

ANOVA showed that there was a significant difference on the amplitude of muscle contraction between the muscle injected with venom and anti-venin (250mg/mL concentration). A Thin Layer Chromatography (TLC) test was conducted to know the number of possible components in the cobra vine seeds. In the first experiment, the test showed that there were 7 components in the plant sample while the second revealed 5 components.

The researchers aim to discover the potentiality of Cobra Vine Leaves as Anti-bacterial agent through an experimental method. The material needed were gathered and then autoclaved to be sterilized. Approximately 15ml of molten agar were poured into sterilized Petri dishes. The researchers allowed the agar to solidify and exposed the plate with agar to the atmosphere for 5 minutes and immediately sealed the dish with masking tape. Incubate at 37 degrees Celsius.

Poured 20ml of sterile agar medium into sterile plates. Then for the preparation of the cobra vine leaves, the researchers got the extract using cheese cloth and mortar and pestle. Five replicates having four wells shall be placed with different treatments. Treatment A, 1ml of pure extract; treatment B, 1ml of alcohol; and treatment C, 1 ml of antibiotic. Measured the zones of inhibition in mm. Took the average of each extract and computed the antimicrobial activity using agar well diffusion method.

Two-way ANOVA with replication was the test used. Since the computed value is less than the tabular value, the researchers rejected the alternative hypotheses and accepted the null hypotheses. Therefore, the potential of cobra vine leaves extract as an antibacterial agent does not have a significant difference from the commercial ones.

The fact that alternatives are always sought after because of its safety and cost urge the researchers to propose another herbal supplement. Cobra vine, a native growing vine, is known for curing varying illnesses. Some of these are stomachache, heart diseases, problems accompanied with throat, skin diseases, etc. It is also known to be an energy drink.

Basis : Demographic
Applied to the product : Middle age and above
Population : Out of the totality of the population, about 50% is in need of the product.
Target Market :Approximately, 80% out of the 50% is willing and able to buy the product.

Our product is to be positioned as the challenger. There are a lot of herbal alternatives already existing. They have established trust and accountability to people. It is a big challenge for our product to top them all but it really would for it is unique and it is proven effective beyond reasonable doubt. 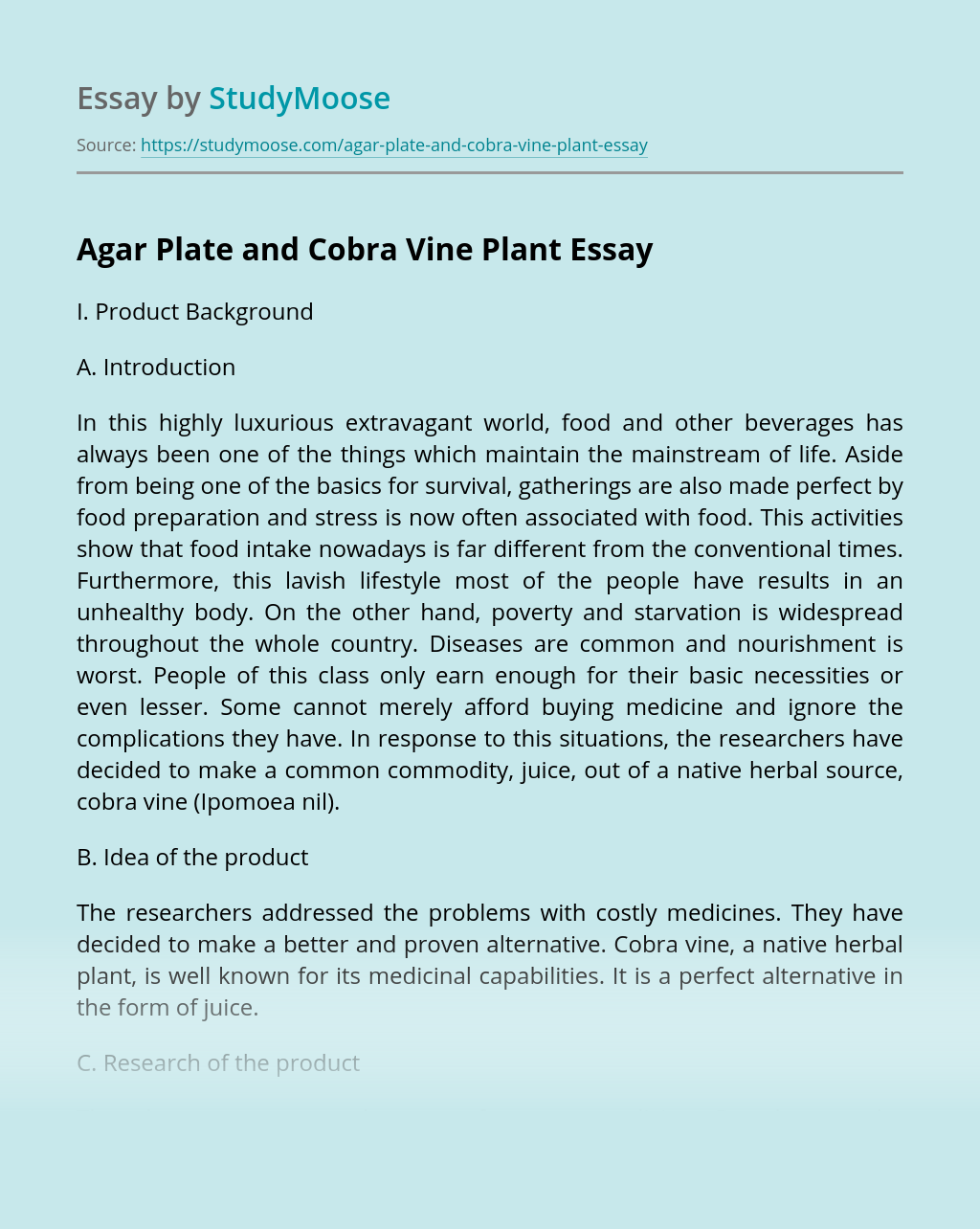