Everyone would agree that Iago and Heathcliff have a vast amount of bitter hatred. It is my belief that they show this in a variety of unprincipled acts against them, predominantly those who, through simple acts, made them wild with jealousy or vengeful desires, or sometimes they just took advantage of a person’s weakness. We see Iago cunningly manipulate Othello, Roderigo, Cassio and Emilia, while Heathcliff cruelly, but openly, tries to destroy Hindley, Hareton, Isabella and Linton.

Iago, first and foremost, completely destroys Othello, changing him from a loving, trusting, controlled man – “I love the gentle Desdemona” to a deranged obsessive – “my bloody thoughts with violent pace”, who kills his beloved wife.

Don't use plagiarized sources. Get your custom essay on
“ Both Iago and Heathcliff show their hatred in their unprincipled exploitation of those around them ”
Get custom paper
NEW! smart matching with writer

He exploits Othello’s inner anguishes regarding Desdemona’s love, by claiming Desdemona is cheating on him with Cassio. Iago begins with the seemingly innocuous, “Honest, my lord?” to torturing Othello with graphic references to Desdemona and Cassio – “to be naked with a friend in bed, an hour or more, not meaning any harm?”.

Iago only needs the anger at not gaining a promotion and some vague suspicions about Othello sleeping with his wife to motivate him. Merely gaining the promotion is not enough to gratify him, he wants Othello truly destroyed.

Iago also exploits Cassio, who is quite blameless, by getting him drunk and quarrelsome so he loses his job, which Iago later gains, “Now thou art my lieutenant”. It is heartless act, and the audience thinks this would satisfy most revenge seekers, and yet, Iago goes on to further destroy Othello, for he has extreme amounts of envious hatred regarding a fairly trivial military decision.

Iago shamelessly takes advantage of the weak Roderigo, who is blind to Iago’s true character, despite being to only person to know of his hatred towards Othello – “I retell thee again and again, I hate the Moor.” Iago makes various false claims to Roderigo, generally making him believe Desdemona will fall in love with him – “It cannot be that Desdemona will not long continue her love to the Moor.” He has no reason to use Roderigo so heartlessly, and he uses Emilia.

To the start of the play, Emilia appears to have unrequited feelings of love, or at least lust towards her husband, Iago. She says, “I nothing but to please his fantasy.” And will go as far as to steal Desdemona’s handkerchief to prove her devotion to him. He only keeps her because he figures she is useful, yet has no respect for her, and when she betrays him, he brutally stabs her. He has no reason (apart from a vague conjecture of infidelity, which even he says, is only “mere suspicion”) to treat her like this, and she is just another victim to his unprincipled exploitation.

Heathcliff, like Iago is bitter, and shamelessly, even openly exploits those around him, out of jealousy and an obsession for revenge. He destroyed Hindley, using his vices of drinking and gambling, and the circumstances in which Hindley died are quite suspicious, although Heathcliff claims “that fool’s body should be buried at cross-roads”, implying it was suicide. Yet, we remember that Hindley treated Heathcliff very badly after the death of old Mr Earnshaw, in a way that, as Nelly, says, could make “a fiend out of a saint”, although Heathcliff is excessive in his retribution. He also takes out his anger on Hindley’s son Hareton.

Hareton received terrible treatment and the hands of both Hindley and Heathcliff. There are numerous incidents when the terrible life Hareton leads is clearly depicted, when he is dropped of the stairs by a drunken Hindley, who says, “As sure as I’m living, I’ll break the brat’s neck.” Heathcliff takes advantage of his orphan state, by claiming Wuthering Heights and stopping his education, so Hareton does not realise Heathcliff has taken his rightful inheritance. Nelly describes Hareton’s state at one point – “ill treatment, in Heathcliff’s judgement. He appeared to have bent his malevolence on making him a brute : he was never taught to read or write; never rebuked for any bad habit that did not annoy his keeper, (implies Linton is almost animal, or at least that Heathcliff dominates his life), never led a single step towards virtue, or guarded by a single precept against vice.”

Heathcliff also exploits Isabella, to gain Thrushcross Grange and the Linton fortune, as well as revenge of Edgar for marrying his beloved Cathy. We see from Isabella’s letter and narration how shamelessly cruel he is to her – “he’s a lying fiend, a monster and not a human being!”. He uses her mercilessly, treating her infatuation coldly, almost cynically – “a delusion, picturing a hero of romance.” His savage, pitiless attitude is also shown towards Isabella’s son.

Heathcliff also exploits Linton, who is somewhat of a irritating, weak, pathetic character. Heathcliff clearly explains his motives for supplying Linton’s material needs but nothing else – “He’s mine, and I want the triumph of seeing my descendant family lord of their estates; my child hiring their children, to till their fathers’ land for wages – That is the sole consideration which can make me endure the whelp – I despise him for himself. Heathcliff also abuses Cathy, “he threatened to strangle her”, and forcing her and Linton into marriage. Linton does not treat Cathy well, either. After the marriage he becomes heavily influenced by Heathcliff, as tells Nelly – “He (Heathcliff) says I’m not to be soft with Catherine – she’s my wife…he says, she hates me and wants me to die, that she may have my money, but she shan’t have it and she shan’t go home.”

Iago and Heathcliff truly exploit those around them in very unprincipled ways. Iago carries out his corrupt deeds because he feels he has been cheated, and because he is a fiend, who cannot bear seeing others happy. He is very cunning and manipulative, and no one realises what he is doing until it is too late. Heathcliff exploits those around him because of his obsession for power and revenge and hate towards everyone who separated him from Catherine. Yet Heathcliff is, on comparison with Iago, open about his evil actions towards others. He has also truly suffered, whereas Iago is satanic in his motivation to destroy others. Yet both show their hatred in unprincipled exploitation of those around them, and the audience is relieved at their excruciating end.

Both Iago and Heathcliff show their hatred in their unprincipled exploitation of those around them. (2020, Jun 02). Retrieved from https://studymoose.com/iago-heathcliff-show-hatred-unprincipled-exploitation-around-new-essay 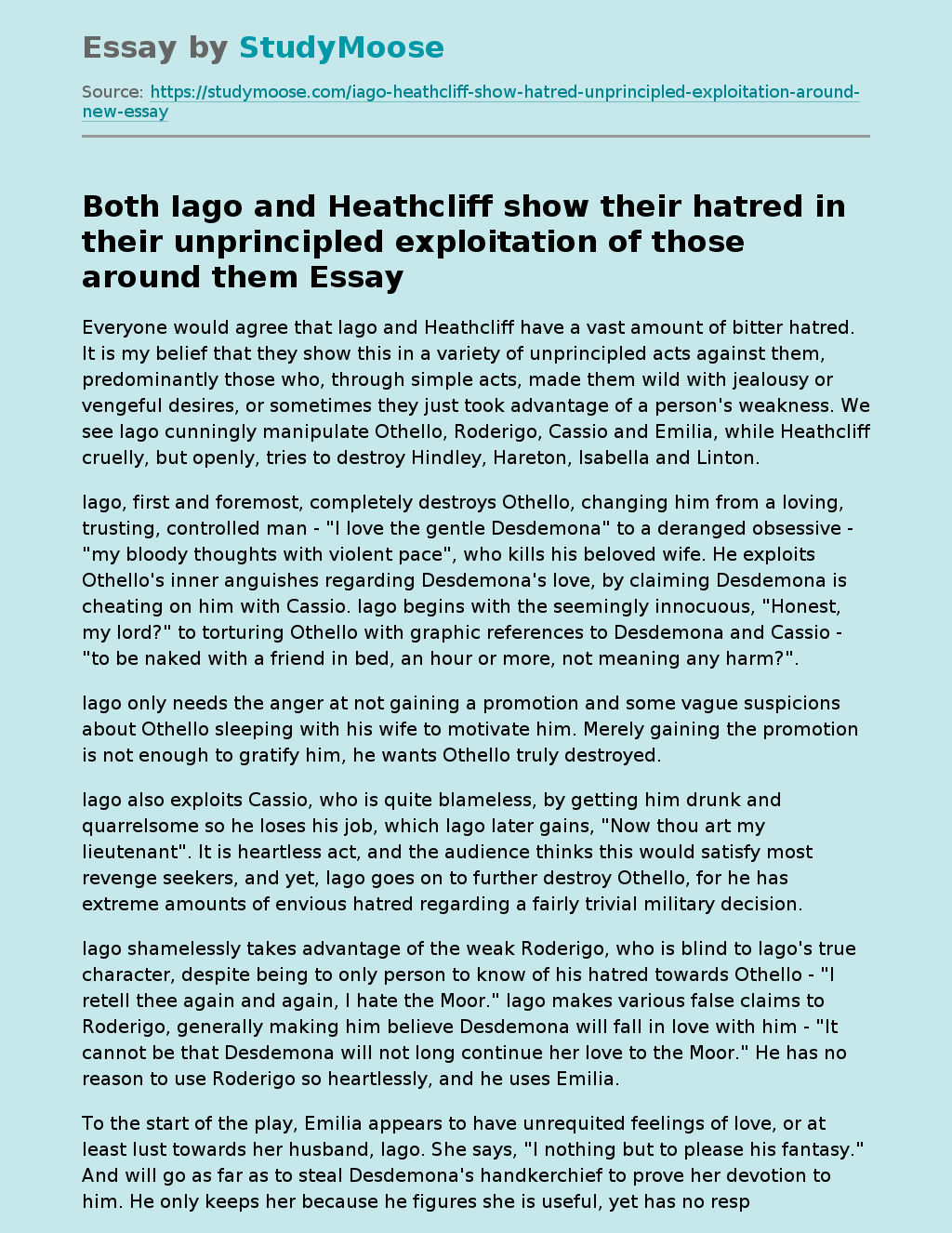