In the poem “Hatred,” Wislawa Szymborska gives a very raw and realist perspective on one of the most powerful emotions in the human psyche. She describes how of all of the different emotions perceivable by humans in the emotion spectrum, hatred is the most powerful and the most capable of impacting our lives. This poem is full of ironies that can be very surprisingly powerful and true and real at the same time.

Perhaps the most obvious irony in the poem is simply the way hatred is described as being beautiful and almost skillful in what it does.

Don't use plagiarized sources.
Get Your Custom Essay on Hatred by Wislawa Szymborska Just from $13,9/Page

One line describes hatred as “Gifted, diligent, hard working.” The irony in this is very clear- hatred is obviously a very negative emotion, and it is described with positive adjectives, ones that you generally would not associate with hatred. Normally, you would see hatred portrayed as a terrible, destructive emotion that brings death and misery everywhere it goes.

While Szymborska does not deny that hatred can be described in this way, she brings another perspective to hatred, which is that the power of hatred is unavoidably impressive and ultimately trumps that of other emotions such as peace and happiness.

This creates a strange situation with the reader, as we are put in the position of admiring something that destroys the lives of millions every single day and yet we are unable to deny its beauty. Irony is something that has the potential of making people incredibly uncomfortable when it is presented in certain contexts. This poem is no different- the reader is forced to praise an idea that they have come to recognize as a negative poisonous connotation, almost as if we were convinced to admire a fearsome dictator who was responsible for the death of many, such as Hitler or Mussolini, for their incredibly effective leadership skills. We know it’s wrong, but it’s impossible to deny.

Certain lines in the poems are ironic by themselves for this very purpose. For example, the first two lines of the poem are “See how efficient it still is, how it keeps itself in shape.” It is almost comical how Szymborska describes hatred as “keeping itself in shape,” while on the other hand it keeps the entire world bent out of shape. The entire sixth stanza employs this idea, in lines such as “It knows how to make beauty. Magnificent bursting bombs in rosy dawns” This is an especially dark, but interesting type of irony- turning a horrific situation, such as the explosion of bombs described as magnificent, into a beautiful one.

Yet, although the irony of the poem is dark, unsettling, and almost shocking, it is one of great truth. The fact of the matter is that no other emotion creates such excitement, such energy, motivation, and impact, as hatred. It is a sad truth that hatred has accomplished more than peace and love could ever dream of accomplishing, even if its achievements have a dramatically negative impact.

In some ways, it can even be thought of as ironic that hatred is portrayed so negatively and love and peace so positively, considering the sheer power and motivation that hatred is able to provide people with in comparison to that of love and peace. If anything, we should think that forces that are as effective, compelling, and intoxicating as hatred would be embraced by society and praised for their forcefulness and incredible ability. The irony of this poem, and of the world, is that the most negative forces that drive human behavior and judgment are in the end the strongest and most potent ones in the spectrum of human thought. 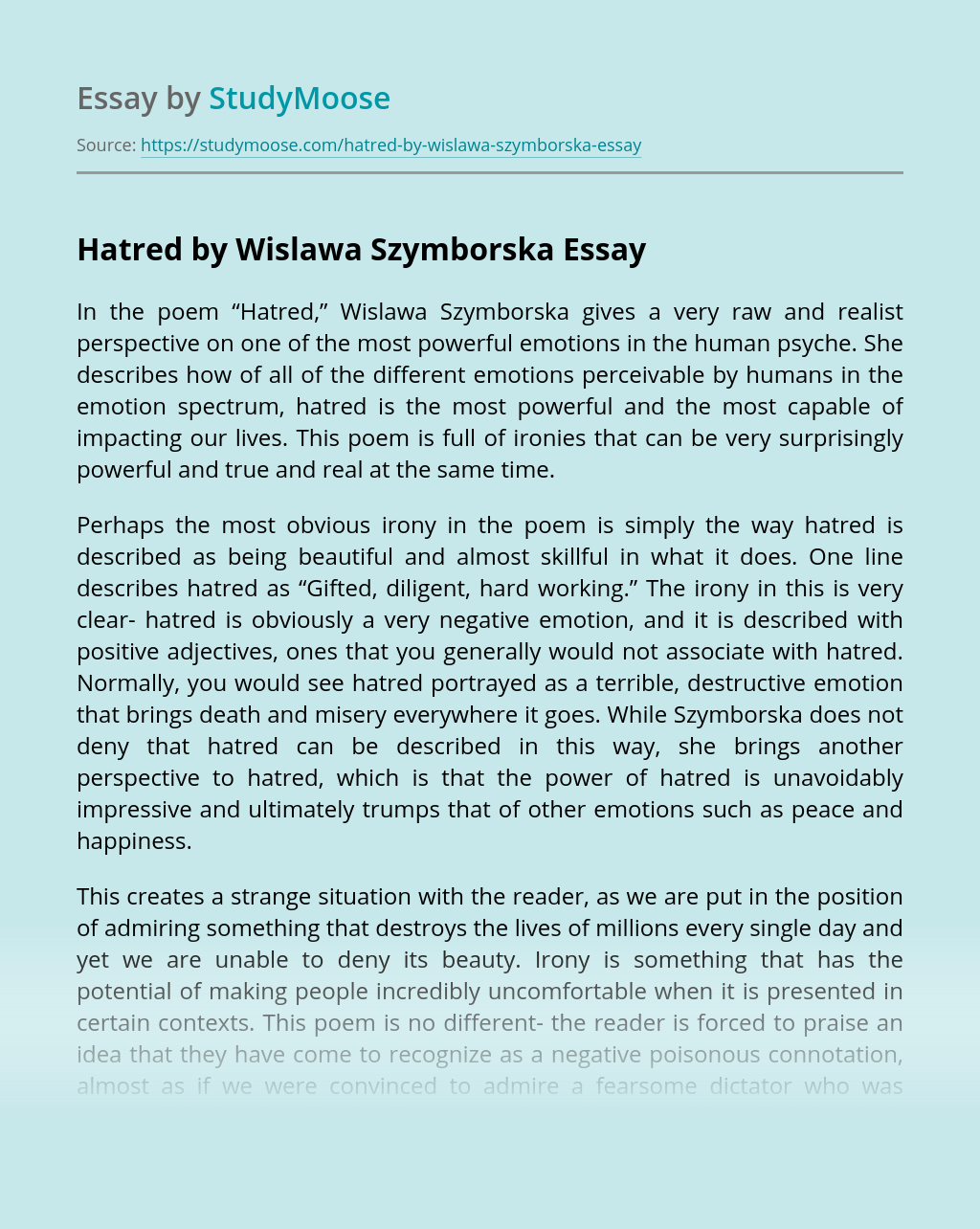 History and Development of Equity

Rate this post It is important to appreciate, especially when reading older cases on the law of trusts, that there were, until 1873 in England, two main separate courts – courts of law and courts of equity. Trust law was a product of courts of equity. We will thus look at: (i) the meaning of...

Rate this post Media offer a distorted image of criminal activity Over-representation of violent and sexual crimes– Ditton and Duffy– 46% of media reports had to do with violent/sexual criminal activities however just made up 3% of all criminal offenses recorded by the authorities Media coverage exaggerates authorities success The police are a major source...

Get Essay
Horizontal Mergers of Companies

Rate this post Mergers occur when one business firm buys or acquires another business firm (the acquired firm) and the combined firm maintains the identity of the acquiring firm. Business firms merge for a variety of reasons, both financial and non-financial. There are a number of types of mergers. Horizontal and non-horizontal are just two...

Rate this post In this answer, I am going to discuss about the conjugal relationship in modern industrial societies. This means I will assess the claim that conjugal relationships are based on equality in modern industrial societies. I plan to structure my answer from housework and childcare, power and money management. The hours worked between...

Rate this post Many teens across the world are facing issues with cyber bullying. Not only are the teens being affected but their families too. People wonder what to do with this situation. With technology increasing, it’s making kids easier to bully one another online and through many different forms of technology. As cyber bullying...