A Poem and a Song Richard Cory Comparison

Don't use plagiarized sources. Get your custom essay on
“ A Poem and a Song Richard Cory Comparison ”
Get custom paper
NEW! smart matching with writer

The poem “Richard Cory” demonstrates quite clearly that money cannot buy happiness. The speaker describes Richard Cory as “a gentleman from sole to crown, clean favored, and imperially slim”. This description exemplifies Cory’s appearance and gives an idea of aristocratic quality and royalty. “And he was rich – yes, richer than a king – and admirably schooled in every grace” gives an impression that Cory was not only a wealthy man, but he also was intelligent with discreet manners.

He would please everyone’s heart with a simple “Good Morning.” The line “we thought that he was everything” indicates that the working class as well as the narrator think this royal man has everything one may desire. Then the narrator soon explains that on “one calm summer night” he kills himself by putting a gun to his head. It is clear that life is not all about material things.

There some things in life that money cannot buy such as happiness, love, and friendship. All people in the town wished to be in Cory’s place. The working class admired and idolized him. “Whenever Richard Cory went down town, we people on the pavement looked at him” is the first indication that Cory holds, in the minds of others, a higher status. Cory is the envy of whole town. The townspeople assume that living like Richard Cory will bring them infinite happiness. In all times people could not help admiring what others possess and others’ work. In fact, some people forget to be themselves in their desire to be like the one they admire. However, like in Cory’s case, the townspeople did not realize that they were happier than their wealthy aristocrat. The physical, mental and emotional balance is more treasurable than all money in the world.

The theme of the song “Richard Cory” is this rich influential man who looks so fortunate could want to kill himself. “He had everything a man could want: power, grace, and style”, yet he was not satisfied with something in his life. It seems that the man who was born rich, “a banker’s only child” hates his life for some reason. The fact that he puts a bullet into his head shatters the image of the perfect life and leaves the reader to wonder why. Maybe things are not so perfect. Maybe the clothing, money, and status were not enough. Another theme of the song is the envy of the narrator. “I work in the factory, and I curse the life I am living, and I curse my poverty…” shows the speaker’s struggle for life. The narrator jealously looks at the man who is more fortunate and powerful than him, “owns one half of this whole town”, and has “parties and orgies on his yacht”, he wishes to be Richard Cory. The narrator fails to realize that outward appearances are not always what they seem, and that money is not the key to happiness.

The major change that Simon and Garfunkel made when turning the poem into a song is portraying Richard Cory in rather unfavorable light than it is in the poem. In the poem, he is “a gentleman from sole to crown” and “always quietly arrayed” while in the song, Cory is viewed as having “political connections to spread his wealth around” and “parties and orgies on his yacht”. In the song, Richard Cory is described as the one who does not earn money honorable. The line “Cory owns one half of this whole town with political connections…” denotes his control and power. The narrator of the song clearly resents Richard Cory while the narrator of the poem admires him.

In conclusion, the whole purpose of both pieces is to teach two life lessons. One of the lessons being that money cannot buy happiness. Many people who do not have a lot of money are jealous. This leads to how people think there is happiness with only money. There is more to life than that. The second lesson is things are not always as they appear. All of the poor people envy Cory and assume that, because he is rich, his life must be perfect. Apparently, Richard Cory was not as happy, as everyone perceived him to be. On “calm summer night, he put a bullet through his head”.

A Poem and a Song Richard Cory Comparison. (2016, Mar 29). Retrieved from https://studymoose.com/a-poem-and-a-song-richard-cory-comparison-essay 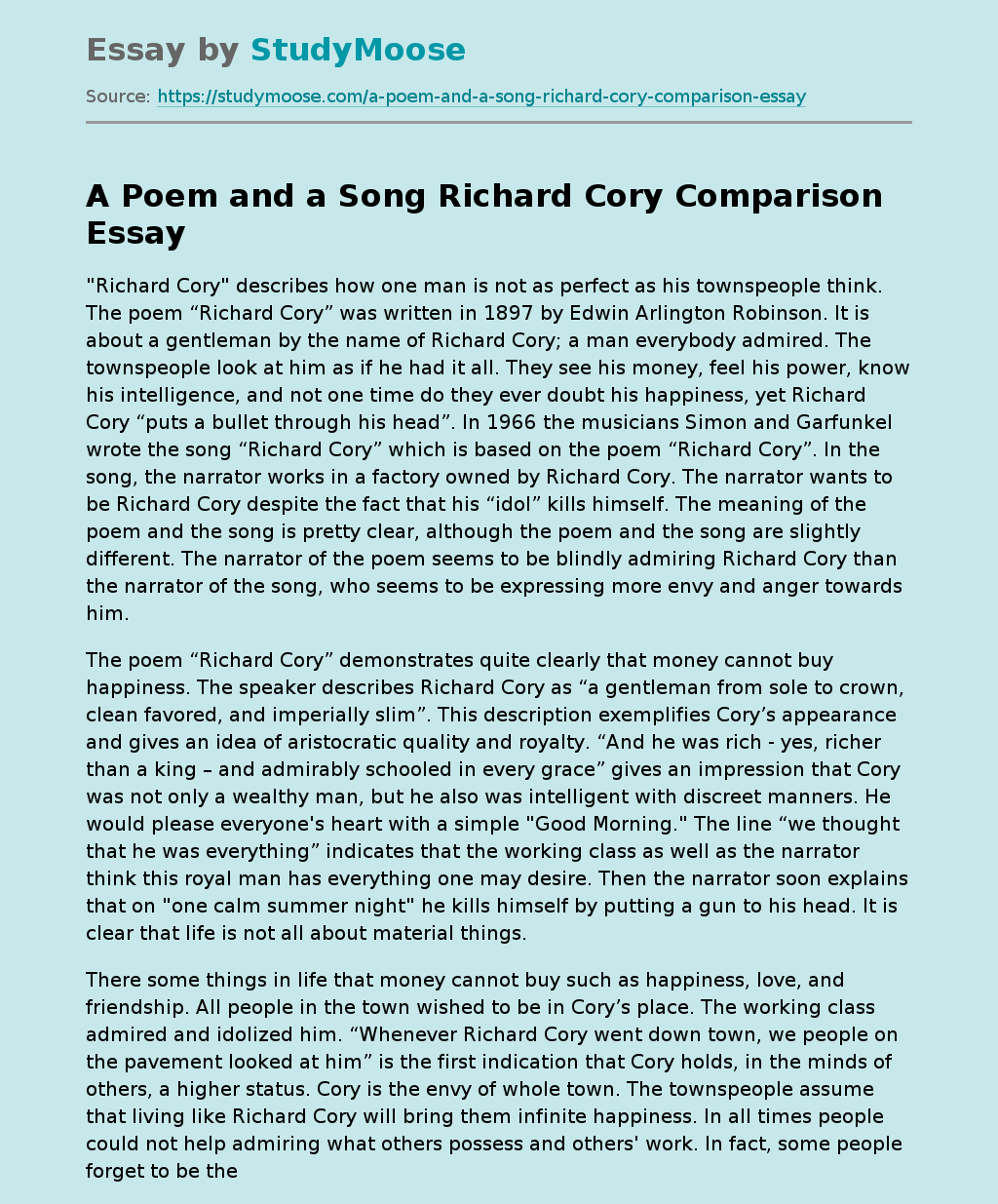