Paraphrase of A Poem Richard Cory by Robinson

When Richard Cory entered the business district all of the townspeople would stand aside and watch him. He was trim and clean cut. He was very rich and knowledgeable. He was also extremely privileged. The townspeople wanted to be him. They continue to work their lives away. One day Richard Cory killed himself. This brief summary of Edwin Arlington Robinson’s “Richard Cory” does not capture the true emotion and irony presented in the original poem. It excludes many uses of connotation, which help the reader build a clear mental picture.

Don't use plagiarized sources. Get your custom essay on
“ Paraphrase of A Poem Richard Cory by Robinson ”
Get custom paper
NEW! smart matching with writer

In the paraphrase it uses far more words to explain what exactly is happening in Richard Cory’s life.

The poem “Richard Cory” is known for its use of irony and word association. Throughout the poem Robinson’s use of phrases such as “imperially slim”, “from sole to crown”, and “schooled in every grace” give you a strong mental image of what Richard Cory looks like and how he presents himself which certainly leaves you feeling as if he is of royalty.

There are also many other royal connections such as the use of the line “He was rich-yes, richer than a king-” and also just by the main characters name alone, which is composed of the word Rich. Richard is also the name of many kings as well.

In the paraphrase it fails to present certain word associations that readers would pick up on in the poem. Instead of using words that aid your imagination in the right direction it is very blunt for example by saying “He is very rich and knowledgeable” doesn’t quite leave the same effect as saying, “admirably schooled in every grace”.

I do feel though that in the paraphrase it is far more shocking when Richard Cory’s suicide is announced because there is no clear foreshadowing presented. Where as in the poem it hinted as if he were only perfect on the surface by entering the line “In fine, we thought he was everything”.

This leaves the lingering impression that something is truly wrong underneath his perfect exterior, which the paraphrase fails to capture. The summary is far less descriptive when it comes to the reveal of Richard Cory’s death. For example when you learn about his suicide in the paraphrase all that you are able to infer is that he took his own life. Where as in the poem it goes into greater detail by telling the reader exactly when and how the suicide was committed by saying “And Richard Cory, one calm summer night, Went home and put a bullet through his head”.

Thepoem leaves much room for the reader to infer certain things by hinting and using vocabulary to portray a certain image. The line announcing his death has many contrasting meanings in itself to exemplify the pure irony of the entire poem. It mentions a calm summer night, where as the night was anything but calm for him. When summer is read it is typically used to portray light and happiness and by saying that it was night eliminates the meaning. It uses the word calm to present the idea that everyone else in the city was relaxed whilst Richard Cory was feeling desperate in the dark night.

Without these connotations in the paraphrase it lacks the dramatic effect in the reveal of his Cory’s death. In the beginning of the poem it refers to the townspeople being on the pavement, which is typically lower than the sidewalk, already putting Cory above the working class. Since already reading through this poem many times it becomes clearer and clearer that Richard Cory was attempting to reach out to someone the entire time but everyone was much too intimidated to respond to him.

It mentions that he was “always quietly arrayed” and also that he was “always human when he talked” which gives us the impression that he still remained a true gentleman in contrary to the amount of money he may posses. The poem states “but still he fluttered pulses when he said “Good Morning””. But it never suggests that anyone ever responded to Richard Cory even though he seems to be reaching out by always remaining down to earth and easy to talk to.

These desperate attempts at communication are defiantly not portrayed in the summary of the poem at all which fails to revel his desperation that also foreshadows his death. The poem begins with the townspeople idealizing Richard Cory to them realizing that they are stuck as workers that must go “without the meat, and curse the bread” which is most likely where they will remain for their entire lives. In the first line of the poem it refers to Richard Cory going “downtown” which insinuates that he must of previously of been uptown which leads you to believe that is where he lives, on the richer side of the city.

Throughout the poem you get a sense that the townspeople respect Richard regardless of the royal connotations. A paraphrase is good in bad in the sense that it lacks certain word associations that present a clear mental image for the reader and by the way that it sums up a poem in its purest form by eliminating many connotations and examples that help show the bigger picture in the poem. Robinson uses dramatic irony to present the message that not everything is what it seems.

These workers spend their lives wishing for everything that they think Richard has when in reality they have no idea the emptiness that his life consists of. The summary of the poem lacks the emotion portrayed in the story as well as eliminating many hidden details that foreshadow the events. The poem develops the story in a mysterious forces the reader to dig deeper into the character as well as the meaning while a summary disconnects you from the characters in the poem. Altogether a paraphrase lacks the emotional intensity as well as depth distilled in original poetry.

Paraphrase of A Poem Richard Cory by Robinson. (2016, Sep 13). Retrieved from https://studymoose.com/paraphrase-of-a-poem-richard-cory-by-robinson-essay 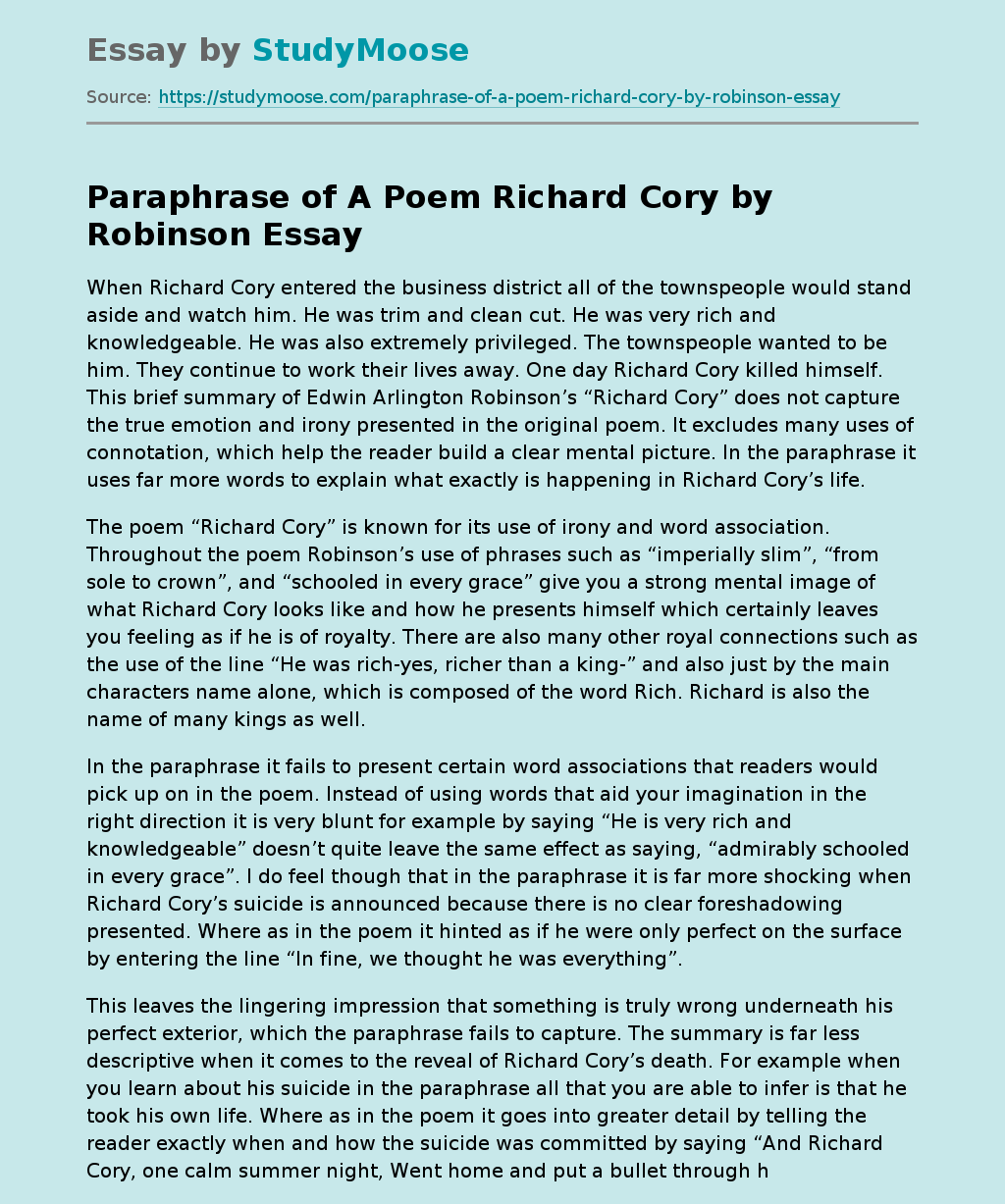