Friendship in Gregory By Panos Ioannides

Panos Ioannides wrote a story about loyalty, friendship and irony, which he called, simply, “Gregory.” The story takes place in Cypriot prisoner of war camp, during their war with Britain, from the perspective of a Cypriot guerrilla. An English prisoner named Gregory develops Stockholm syndrome, where the captor and captured form a positive bond. When his execution is ordered the guerrilla’s must choose between their friend and their loyalty to their country. The irony of it is that no one ever checked up on the orders to have Gregory killed.

Turn in your highest-quality paper
Get a qualified writer to help you with
“ Friendship in Gregory By Panos Ioannides ”
Get high-quality paper
NEW! AI matching with writer

Gregory had two separate opportunities to escape, but he didn’t take either of them. The situational irony of it is that that cost him his life. The first opportunity to escape was when the guerrilla’s leave the camp and the sentry falls asleep, they returned to find Gregory was still there. The soldiers joke later asking why he didn’t run away. “Where would I go in this freezing weather? I’m OK here.

Gregory replied. Ironicaly that decision cost him his life instead of saving it like he thought. This also shows that Gregory is developing Stockholm syndrome, because he thinks he’s “OK’ with the guerrilla’s. The second opportunity is after they got the execution order. The guerrilla’s sent him, alone, to do laundry while they decided what to do with the orders. Subconsciously they sent him out in hopes that he would run away and they wouldn’t have to kill him, but he was naive and did their laundry as asked believing they wouldn’t kill him.

In this part of the story the narrators loyalty to his country is being tested as well as his friendship with Gregory.

Another example of situational irony is when a scorpion is crawling up the narrator’s leg and Gregory kills it with his bare hands. If he hadn’t killed that scorpion he might have lived because the executioner would be dead. The story “Gregory” is a test of one man’s loyalty and friendship in an ironical situation. Before he shoots Gregory the narrator makes a statement that summarises the irony in the story. “Because you didn’t escape the day the sentry fell asleep; because you didn’t escape yesterday when we sent you all alone to the laundry ” we did it on purpose, you idiot! Why didn’t you let me die from the sting of the scorpion?”

Friendship in Gregory By Panos Ioannides. (2016, Jul 15). Retrieved from https://studymoose.com/friendship-in-gregory-by-panos-ioannides-essay 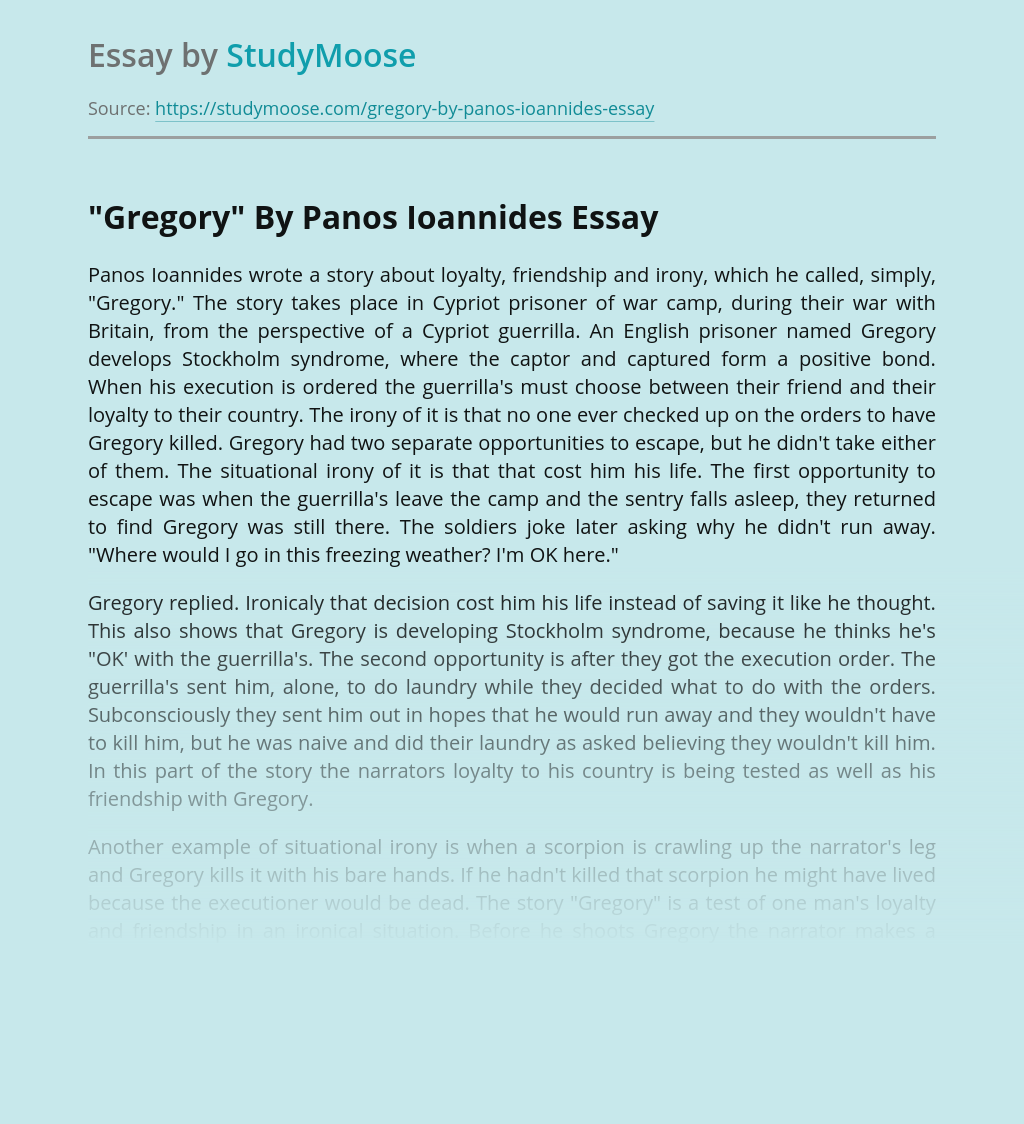 Turn in your highest-quality paper
Get a qualified writer to help you with
“ Friendship in Gregory By Panos Ioannides ”
Get high-quality paper
Helping students since 2015
Stay Safe, Stay Original