Gregory Nava’s El Norte debuted in the Telluride Film Festival in 1983 and presents the challenges and realities of migration and multiculturalism. Though the film’s settings are not consistent with today’s scenarios, it is still an important work because it provides and periodical anthology of the migrant issues as well as a background to today’s multicultural issues. A study of the film reveals not only the developments in the perceptions regarding immigration but also the development of niche cultural groups from the perspective of both original and adoptive societies.

Moreover, El Norte suggests that cultural biases exist in various levels of society even in seemingly homogenous ones and that cultural disambiguation creates social vulnerabilities. Therefore, the movie can provide valuable insights on how multicultural psychology develops and changes in different settings. In turn, the insights that can be developed can help address the issues faced by the Xuncax family, particularly by the Rosa and Enrique in their quest to find their way and to establish a new life in the United States.

In all three parts of the movie, cultural differences remain a dominant issue. Tackled closely with social issues, the film’s view is that culture is both a source of strength and a bane for the siblings. At the same time, the change in both Rosa and Enrique’s view of their experience and their prospects undergoes a metamorphosis that challenges them to find their place in the social schema. Immigrants or Refugees One of the major issues that are being explored in the movie is regarding the status of Rosa and Enrique as migrant or refugees.

This issue is one that has become an interest in consideration of the political and economic persecution that became prevalent in autocratic and militarists governments in South America. Many countries, in the interest of controlling the influx of transnational established qualifications that can be considered as refugees, eligible for sanctuary and those that are to be considered as migrants. The general consensus seemed to be that political persecution was to be the basis for refugee status while migrants were associated with economic motivations.

Furthermore, the status of immigrants requires legality where eligibility is based on an individual’s productive capacity. In the case of the main characters of the movie, they started out more as refugees. The circumstances that motivated them to leave Guatemala were because of persecution against indios their motivation was clearly not economic in nature. Rather, it was because of fear against threats against their life due to their ethnicity. At the same time, one classifies the siblings as refugees because they are not given the choice of staying or going back to Guatemala or to seek the protection of their government.

It is understandable that there is reluctance to consider them as refugees since such a status, under the international charters, makes them eligible not only for residence in the United States but also makes them eligible for social assistance and placement. In contrast, immigrants are managed by the conditions of their migration or residence programs and there is greater leeway for their ejection when they are proven to be unproductive or detrimental to society. Thus, Rosa and Enrique can only turn to illegal means of entering the country as illustrated by their association with a “coyote” who smuggles them into the country.

Though this bypasses the bureaucracy needed to gain both refugee and immigrant status, it also has left them vulnerable to abuse since they can not seek legal or judicial intervention if they need to. Furthermore, since they already entered the country illegally, the have burned their bridges in gaining legal recognition in the country. The siblings both offer perspectives on the institutions that migrants have to deal with. Rosa’s perspective is that their journey north has only led them from death to greater poverty and questioning if they have a place anywhere in the world except in death.

Enrique reflects the sentiment that he is considered simply a factor of production, a “strong arm”, gaining no greater value than livestock or equipment. In either case, the siblings show that they see themselves apart from society, excluded by their circumstance and history. Acculturation Though the associates of the siblings are generally limited to their own community of migrants, this is not to suggest that they do not make an effort to become part of the general society. However, their efforts are often deterred by cultural and social preconceptions that box them into their roles as illegal immigrants.

At the same time, they were being challenged to adjust to their roles within their won community as many of the racism they faced against their indigenous heritage in Guatemala persisted. The irony is that they heritage that they are being persecuted form is also the source of the philosophical perspective that give them the will to survive and bear the conditions and challenges of their journey north. The siblings peg all of their social interactions from their observations as well as each other’s perspectives.

The issue of turning back from one’s cultural heritage is an underlying theme of the story since from the very beginning, perceived cultural inferiorities were the crux of the challenges faced by Rosa and Enrique’s family. Thus, within the socially excluded community they are categorized in by mainstream society they remain outsiders. It is then apparent from the observations and interactions of the siblings that their acculturation is always from and externalist’s perspective. Therefore, as Rosa and Enrique tried to adjust to their circumstance, there seems to be an acceptance that they will neither be able to be part of their community.

Immigration Policies and El Norte The conjecture that the illegal immigrant trade is one that is protected and even encouraged is a perspective that is presented in the story. Illegal immigrants provide cheap labor, a blanket against social security requirements and a labor supply for jobs that are unwanted jobs. At the same time, immigrants are able to have livelihoods that allow them to subsist as they try to gain the tenure they need to apply for legitimacy. However, there is credence to Enrique’s sentiment that such a scenario has left them in a continued disadvantage.

He points out that their situation has left them not only economically, socially or politically disadvantaged but also has made him question his worth as an individual and cultural heritage. The United States remains to be the preferred country for migration and there is still a great need for migrants particularly to sustain labor forces in jobs that are considered blue-collar in nature, However, the reality is that the country is already facing high unemployment among its citizens and there is a slow down of the economy.

Thus, the need to control migration is also justified, if not necessary. At the same time, the persistence of ethnicity or culture as a bias still persists despite the establishment of political institutions that are to protect social diversity. The reality is that the issue is not so much regarding migration but the lack of viable opportunities and the inequitable distribution of wealth within nations and internationally. 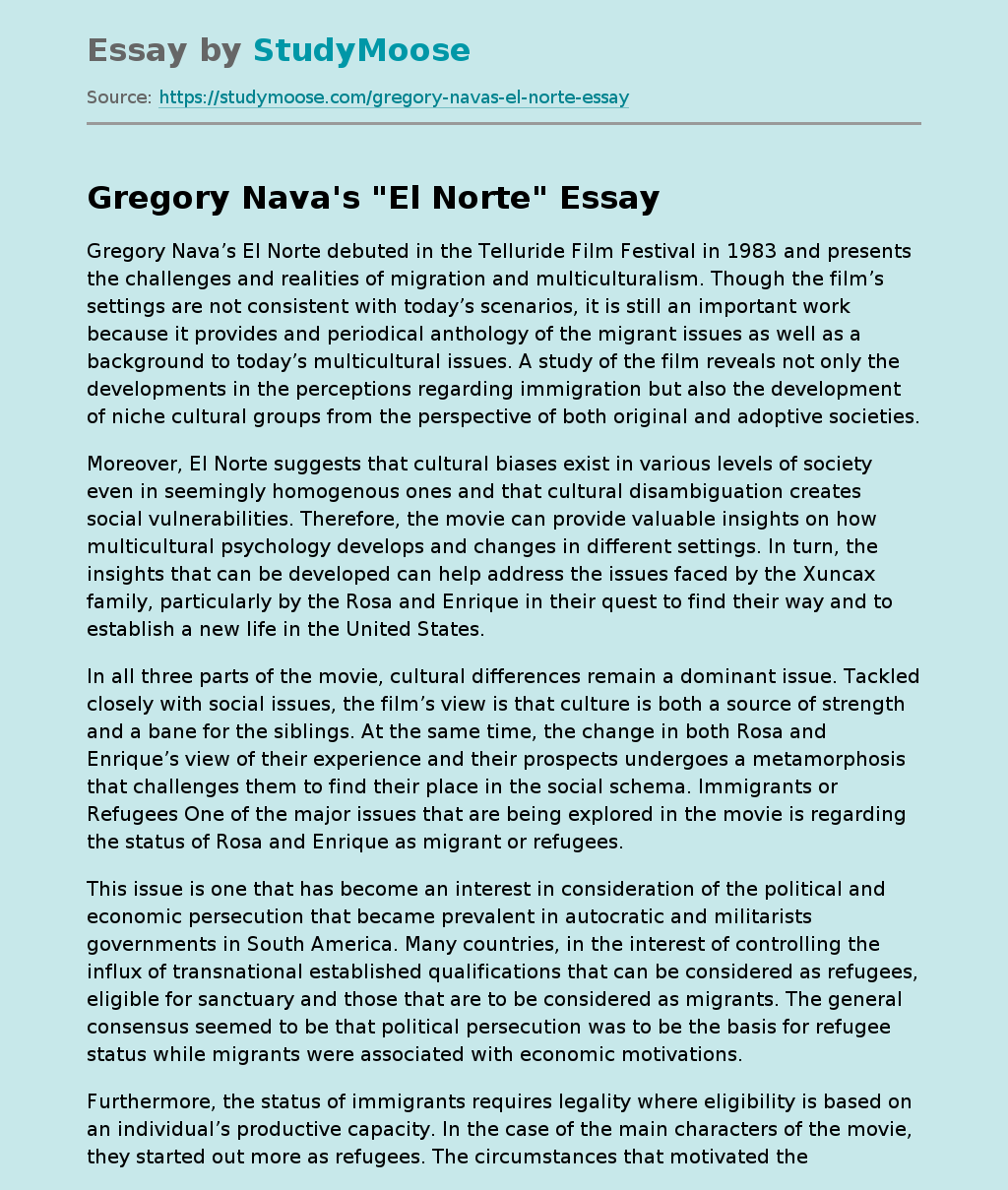