I had the privilege of seeing Fences at Ford’s Theater. Featuring one of my professors, Kenyatta Rogers as Lyons Maxwell, his daughter Mecca Rogers as Raynell Maxson, Jefferson A. Russell as Gabriel Maxson, Justin Weaks as Cory Maxson, Doug Brown as Jim Bono, and headlining well-known actors Craig Wallace playing Troy Maxson and Erika Rose as Rose Maxson. Fences is the classic from August Wilson about Troy Maxson, a former aspiring baseball player who missed his chance at a professional career and carries the bitterness with him.

Don't use plagiarized sources. Get your custom essay on
“ I had the privilege of seeing Fences at Ford’s Theater Featuring one ”
Get custom paper
NEW! smart matching with writer

A sanitation worker now, his anguish is carried into his home, creating strife between his wife, Rose, and his son Cory. Fences follows Troy and the ups and downs between him and his family, a beautiful performance, directed by Timothy Douglas, executed by a incredible cast and crew.

With wonderful performances all around, it’s difficult to find any fault with the professional production itself. The professional theater in Washington D.C earned its accolades quite well.

Despite this, there was one aspect of the production that was difficult to appreciate. We had attended on a Thursday matinee, along with many other high school and middle school classes. As one can expect from a production this dramatic, the audience was not exactly respectful to others with their reactions. While it can be beneficial for a cast to receive audible reaction to their performance, too much with conversations in-between can become distracting for other audience members as it takes them out of the moment.

The extra conversations can also cut into the actual dialogue in the show and specific character moments, such as when Lyons is interacting with Bono, Cory, Gabe and Rose. There were jokes being thrown back and forth between all the characters, and it was hilarious to the point where the audiences audio was louder than the conversation and some of the lines were lost. Despite the setback, the performers were able to keep the atmosphere on stage and create high tension and emotionally driven moments.

One such performer I personally loved was from Craig Wallace. Troy’s character is illustrated by Rose as “big”, as he fills the house with his presence. Every time he speaks, Craig commands the space in such a way that the audience knows who is calling the shots most of the time. Even when his stage son, Cory, attempts to speak back to him, Craig channels this beast to grip back the power between them. Craig also expresses beautifully the complex dichotomy in Troy with the moments where he flirts with his wife and jokes around with Bono. Craig shows that despite Troy’s self-serving, rough exterior nature, he has a capacity to be sensitive and caring. The scene where he is rocking his newborn daughter outside at night is especially telling that Troy has great potential to be the father-figure Cory needed, making it tragic when Troy faces against his son. Craig Wallace delivered a memorable performance with an incredible production.

Fences was performed in a gorgeous proscenium space emphasizing the back of the house. The backyard was where most of the action occurred, with fences a ball hanging from a tree. Against the house was meant to be the shadow of the tree, however it seems to give it the towering effect it would not normally cast, an additional shadow was made specifically to cover half of the house. It was prominently displayed throughout most of the show, until Troy had died. This simple design piece defined the thought-process for the tech side of the show for me. The shadow helped emphasize the size and influence Troy cast upon his family and remained an ominous piece of the set throughout the show, especially after it faded following Troy’s death. The set looked as if it was pulled out of a neighborhood from the 50’s, accurate with the setting of the play, while also having a slightly timeless feel that made it seem like the story could be happening now.

Fences at Ford’s Theater was an impressive experience of theater I’m immensely pleased to have experienced. It showcases the black experience in the 50’s, I yet does not isolate its audience in the emotional impact an abusive patriarch can have on a family. These characters were brought to life by fantastic performers and it’s inspiring to so theater major like myself to strive for that honest performance in culture.

I had the privilege of seeing Fences at Ford's Theater Featuring one. (2019, Nov 26). Retrieved from http://studymoose.com/i-had-the-privilege-of-seeing-fences-at-ford-s-theater-featuring-one-example-essay 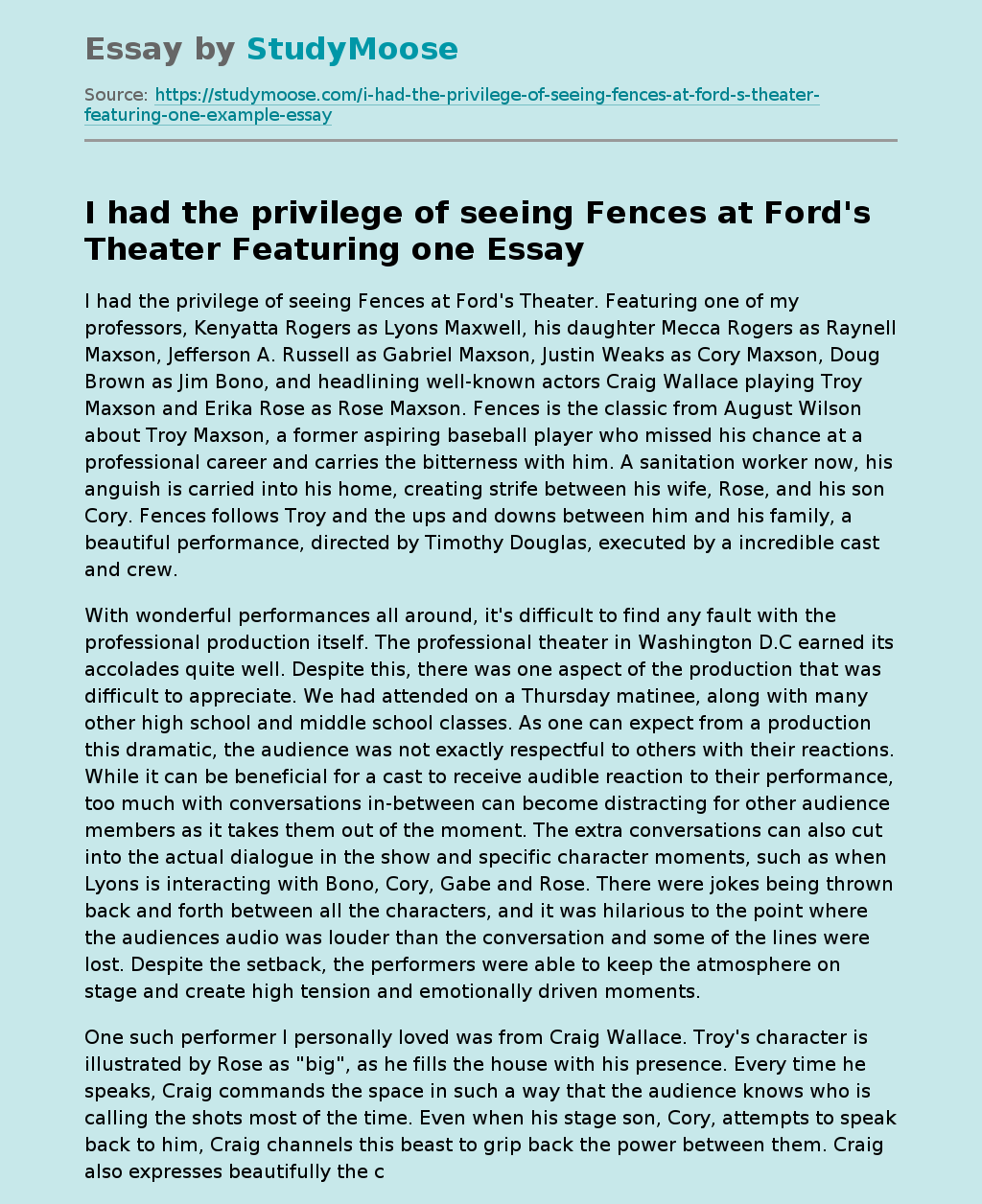