July at the Multiplex

The function of this report is to notify Mr. Mull T. Plex and the consortium of theaters about the recommended actions to take versus moviegoer Tommy. The alternatives include proceeding with the litigation or working out a settlement that will be handled independently. The lawsuits versus the Royal Theater is made by Tommy, a client who declared to have received a bad experience at the theater. In the following report, we utilized legal, analytical, and ethical thinking.

Legal: After examining both parties’ facts, there is a lack of deceptive misrepresentation to follow match.

Don't use plagiarized sources. Get your custom essay on
“ July at the Multiplex ”
Get custom paper
NEW! smart matching with writer

For that reason, Tommy has a weak standing. Analytical: 94% of surveyed moviegoers were not fazed by the commercials screened before the included movie. Ethical: The lawsuits by Tommy was moved by the lack of quality customer care on Royal Theater’s behalf. This case does not need to proceed and can be resolved by making little changes to Royal Theater’s policies.

Based upon these analyses, we advise Mr.

Mull T. Plex and the consortium to negotiate a personal settlement. In order to avoid this from taking place again, we have also recommended our suggestions on modifications to Royal Theater’s ticket stubs and refund policy.

Introduction
Mr. Mull T. Plex and the consortium of theaters around the area have hired our consulting team to analyze and break down the litigation against the Royal Theater made by Tommy. Tommy is suing the Royal Theater on charges of fraudulent misrepresentation and the consortium of theaters is very well concerned with the possibility of a class action lawsuit that could prevail from this case.

Tommy’s lawsuit is based on his experience at the Royal Theater during the screening of movie “The Governator.” After a displeasing chain of events, Tommy demanded a full refund in which Royal Theater refused. Mr. Plex and the consortium of theaters have asked us to assess the situation and to authenticate whether or not Tommy’s case will prevail in court. We have put together a thorough report containing evidence that Tommy’s case against the Royal Theater is very unlikely to be triumphant in court, survey results and recommendations which will not only help the Royal Theater, but also the consortium of theaters to abstain from future allegations such as the ones made by Tommy. Facts

1. Representation of facts
Tommy: Royal theaters informed Tommy that the movie begun at 1:00 PM. Tommy not only saw it on a newspaper advertisement but also confirmed it with the clerk. It was also the dimming of the light at 1:00 PM that led Tommy to believe that the showing was about to begin.

Tommy: Tommy was lead to believe that the movie was to start at 1:00 PM, not the commercials. Since the commercials were 20 minutes long, the movie technically started at 1:20 PM and should have been represented like that.

Tommy: Tommy is not a regular moviegoer; having some free time gave him the opportunity to enjoy a movie. Following a misrepresented time line left Tommy in a fraudulent misrepresentation of an untrue statement. Royal Theaters shouldn’t assume that just because other theaters show commercials that they shouldn’t disclose the knowledge of the movies true start time. Royal Theater: Royal Theater did not lie to Tommy. The viewing did start at 1:00 PM. The commercials are part of the experience of watching a movie and have been for a while not only at that theater but many others. The dimming of the lights is an indication that the audience should grab their seat so they won’t disturb the audience if they walk in a couple minutes late from the actual movie.

4. Intention the Plaintiff Should Rely Upon

Tommy: Tommy saw an ad that was intentionally placed for movie goers by Royal Theaters. Relying on the information provided, Tommy rushed to make it on time to the movie that was said to start at 1:00 PM. What Tommy didn’t know was that Royal Theaters intentionally doesn’t inform people that the commercials start at 1:00 PM and lasts about 20 minutes. Dimming the lights at 1:00 PM also seem to have prompted Tommy into coming early so he wouldn’t struggle to find a seat, forcing him to watch the commercials. Royal Theater: Royal Theaters is aware that not everyone is punctual. This commercial time allows people to not run around frantically looking for seats. Instead, it allows people to use the restroom facilities, grab any snacks and drinks from the concession stand, and return to the screening to avoid missing the movie.

5. The Plaintiff Reasonably Did So Rely

Tommy relied on the continuous notion provided by the theater that the movie starts at 1:00 PM. Taking initiative to double check the times left Tommy no other choice but to trust and rely on the theaters ad and employees.

Tommy: Being emotionally and financially damaged, Tommy is suing Mr. Mull T. Plex for the money spent on the ticket, concession stand, gas and mileage, and his time that was wasted. Royal Theater: Tommy did not suffer any severe damages. Driving to the destination is a choice that all moviegoers make on their own. Whether or not they would like to enjoy snacks and a drink is their decision to make and he had no complaints about that. The movie that was being played at the theater was an anticipated one that most people seem to have enjoyed. Survey Results

The litigation made against Royal Theater heavily revolves around customer service. In order to improve customer service it is advised that all employees answer correctly in accordance to show times. Employees should inform customers the time the lights dim and the time the actual film begins. In addition, a refund policy should be implicated. If the customer isn’t satisfied with the movie within the first 30 minutes, they reserve the right to a full refund. Movie ticket stubs should indicate what time the actual film begins to avoid future confusion with movie patrons. To ensure that Tommy is satisfied, the Royal Theater should issue a private apology. We also recommend that Tommy be gifted a pair of movie tickets and vouchers for the concession stand. A public announcement should be published in the local newspaper informing future moviegoers that there are 20 minutes of commercials before any movie. Conclusion

Using legal, statistical and ethical reasoning, we found that Tommy’s case is minor and should not reach the courtroom. The issue roots from Tommy’s opinion on the Royal Theater’s customer service and commercial policy. Tommy’s reasoning does not hold legal value, therefore would not make it to a court room. Only 1% of moviegoers felt bothered by commercials before their anticipated screening. The consortium shouldn’t adopt drastic changes, as our survey results displayed that there weren’t many movie patrons disappointed that their film started twenty minutes late due to commercials. By issuing a private apology, Tommy would feel appreciated as a customer. We feel that by applying minor changes, movie patrons will continue to frequent Royal Theaters and leave happy with their experience.

July at the Multiplex. (2016, May 08). Retrieved from https://studymoose.com/july-at-the-multiplex-essay 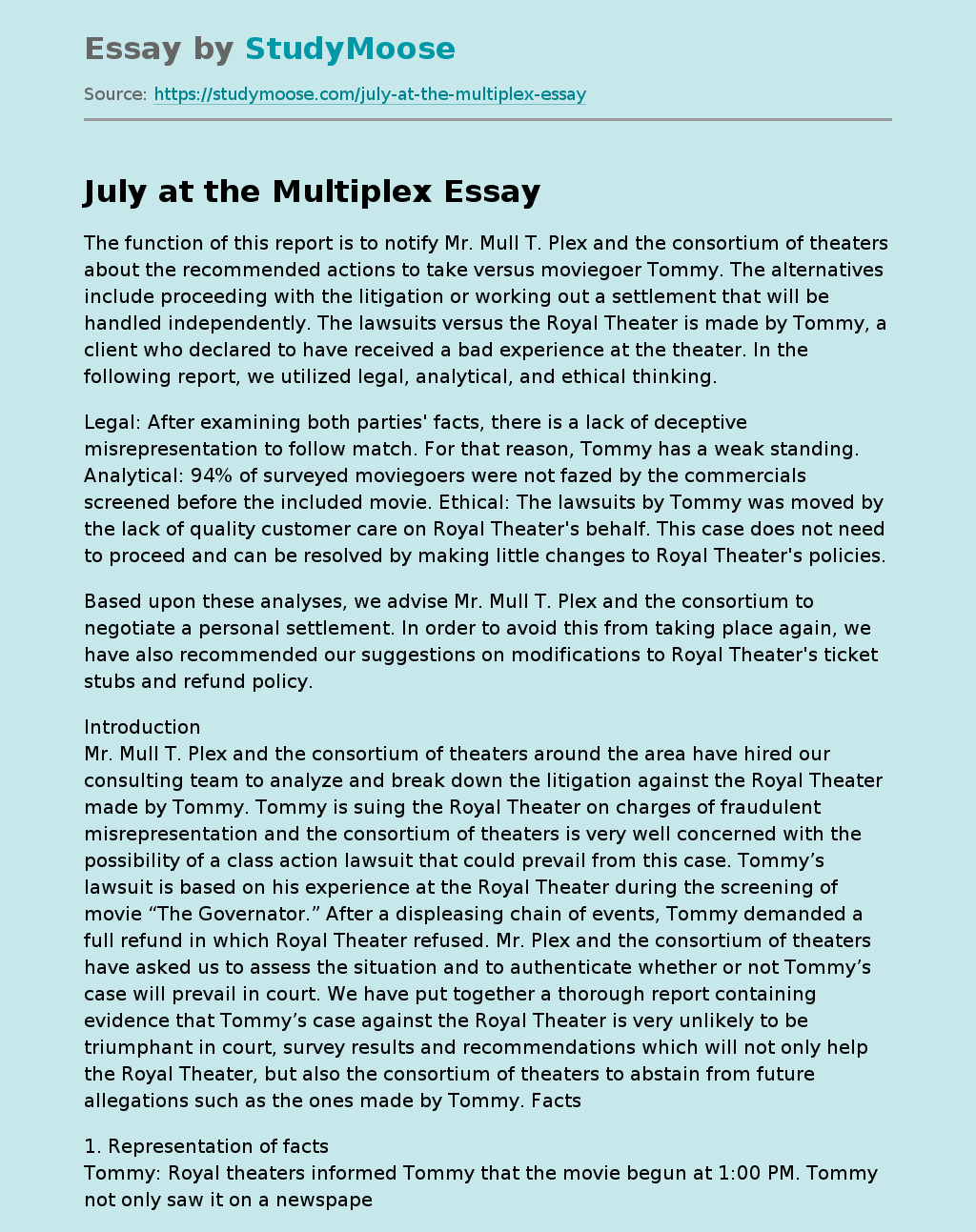