Ibong Adarna, with its mysterious and unknown author but remarkable plot, is credited as one of Philippines’ greatest work of literature ever written in the country. It is one of the must-see or must-read literary pieces like Rizal’s Noli Me Tangere and El Filibusterismo, which students are required to experience in order to appreciate Filipino creativity and to communicate good values.

Ibong Adarna has greatly impacted many of the readers due to its fairy-tale-like and adventurous storyline. It was originally presented in a form of poetry, with Filipino as its medium of language.

At present, the use of poetry and profound Filipino words is not as effective as before in conveying the story of Ibong Adarna to the people especially the youth of today due to technological advances like the internet and various entertainment media on which many are lured to devote much time. Changes must be made in order to communicate the beautiful story of Ibong Adarna to present and future generation.

It seems that the young people of today seek to better understand a story in a more entertaining way. One may say that it would be quite dull and even plain, lulling one to sleep to read Ibong Adarna in its original form.

This is the reason that through the years it has received numerous adaptations such as movies, theater productions, and novels in order to relay the same old story to younger audiences. In fact, high school students watch it in musical or comedy play version as a school requirement in Aguinaldo Theatre or the Cultural Center of the Philippines.

Dulaang UP recreated Ibong Adarna in a lighter, more entertaining way by infusing comedy and surprising creativity, making it more fitting for today’s generation of viewers. One of the interesting difference in this production, unlike in any other productions, was that the actors and actresses have multiple characters to play as even each character was played by two or more actors or actresses. For instance, Don Juan, Don Pedro, and Don Diego were portrayed by three persons each throughout the play. Also, in the production, the Ibong Adarna was portrayed by seven actresses, most likely signifying the seven colors of the feathers of the bird. Some of these actresses who portrayed the Ibong Adarna character also portrayed Maria Clara’s character.

There may be some reasons behind the multiple character factor of the play. One may be that it signified different attitudes of the character. Don Juan, for example, was good-looking and a great fighter. The interchanging of the actors showed different characteristics of Don Juan’s character. In Maria Clara’s situation, it might signify that she was also the Ibong Adarna by being portrayed by some of the actresses who portrayed the character of the Ibong Adarna. Ordinarily, such attempt in portraying characters by multiple actors would result to a lot of confusion but in this adaptation, it was clearly, excellently and cleverly done, adding depth to the person of the characters, without causing the audience any confusion. Furthermore, one more element that showed entertainment to the viewers was the comedic aspect of the play.

This element was shown through the acting of the performers in the play and the words they uttered. The characters’ identities were somehow changed in the production. Don Diego’s character was made to be unmanly or rather effeminate, unlike in the original version of Ibong Adarna. In the scene where the three princes saw Donya Leonora and Donya Juana, Don Diego focused more on the two sisters’ outrageous dresses instead of on their presence that explicitly shows the personalities that were reflected by what they wore. An added entertaining and modernizing factor also was the use of now in trend, pick-up lines, which are the catchy creative sentences used to get the attention or favor of the person one is attracted to or being courted. Scenes like how Don Juan used the same pick-up line in winning every woman’s heart in the story also added intense entertainment factor in the play. This also showed Don Juan’s character of being a womanizer in the story.

Another element that showed entertainment to the viewers was the kilig scenes in the play which were light but serious and very touching. The romance scene between the characters did not show any difference from any of the other plays or even movies. There were touchy scenes involving Don Juan, Donya Leonora, Donya Juana, and Maria Clara. One marked difference however was that Don Juan’s character had kissed almost every woman in the play due to the multiple personalities in each character as stated before. It could be said that this was one negative aspect of the play, which gave a somewhat uncomfortable feeling of distaste for the seeming unhygienic practice. Despite of this however, the play was successful in giving out the feeling of kilig to the audiences. Overall, the props of Dulaang UP’s Adarna appealed to the audience even though a low budget was allotted for the play. The limited budget encouraged the production to be creative and economical without sacrificing the quality of the show.

One creative factor that pleased many of the viewers was the use of shadows in the play. It greatly contributed to the performance and showed how a play can be enhanced even on a tight budget. One instance was the scene where Don Juan fought with the higante which was excellently portrayed even showing how big the giant compared to Don Juan just by using shadows and the right positioning of lights. The costumes of the actors and actresses in the play reflected the creativity of the producers. The costumes were simple yet very resourceful. They did not fail to convey meanings to define the characters. All of the actors and actresses wore black top and pants and would just wear a robe and a hat or some accessories, depending on the character they have to play.

The reason behind this was because most of them play multiple characters in the production. This was one of the aspects of this play which made it different from any other theater production that one might have watched. Comparing the play to the original Ibong Adarna, the plot of the story remained the same. Similar to the original story, Don Juan ended up being with Maria Clara.

Although there were some elements added to make the story more entertaining, the characters, plot, and setting were unchanged. In conclusion, beyond mere entertainment the play showed the different side of Ibong Adarna by using comedy and creativity, bringing to stage the characters with more depth of personality, not just the stereotyped identity which viewers had known and watched. It was as if, the audience, after watching the play, knew much intimately the characters and could even identify them even in actual people whom they know in real life. It showcased and celebrated the Filipino ingenuity and excellence in the field of arts despite economic constraints. It was the kind of play which audience would love to watch over and over again. 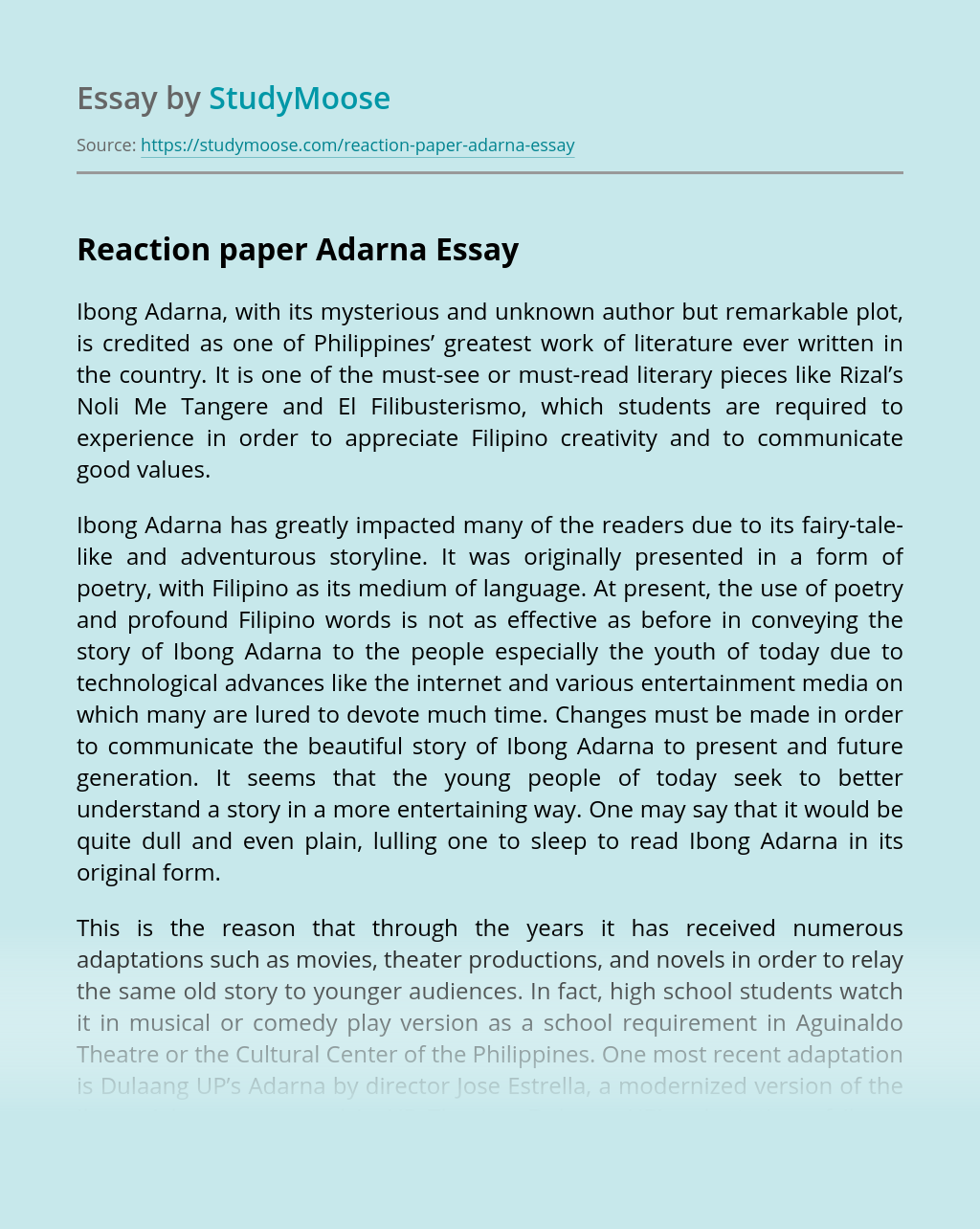