How Is the Technology Evolution Going

Technology is the process, systematic development, and enhancement of new findings. It involves the methods of performing activities with the use of tools and different techniques to make work easier and more efficient. It has evolved over the years of human existence. The use of technology has in recent times increased and will continue to increase exponentially given the increasing demand in the modification of methods involved in getting work done. Based on this fact; one can easily argue that the global advancement in technology has done a lot of good to the human society since it has a long list of advantages to people in different walks of life.

Don't use plagiarized sources. Get your custom essay on
“ How Is the Technology Evolution Going ”
Get custom paper
NEW! smart matching with writer

This claim may be true but on the other hand, technology has also posted so many negative effects to the society. The focus of this paper is to point out critically the negative effects of ever-evolving technology on society in the following ways: addiction and poor health, lack of social skills and environmental pollution.

Technology is like a double-edged sword that has awarded humanity a chance at improved health yet made them more susceptible to chronic diseases like obesity and cardiovascular diseases. With the rise in newer and more advanced technological devices such as tablets, computers, video games, and smartphones, there has equally been a tremendous rise in addiction to these devices. In this digital age, there are so many people who have grown too accustomed to various devices that they do not realize the implications they may have on their physical and mental health.

“It is estimated that between 2% to over 30% of gamers present serious addiction-like symptoms” (Turel, Ofir, et al. 2016). Aside from addiction, sleep deprivation and obesity are two major health deficiencies that affect individuals who lack the discipline to control their dependence on technology. The story of the Oji-Cree community is quintessential to the issue of the negative implications of technology.

A community once filled with strong and healthy people embraced the comfort that accompanied technology and the community was never the same again. Health and the social problem became the order of the day and gradually they lost their sense of who they really are; a sense of the real Oji-Cree people. (Wu, 2017). The internet is another aspect of technology that is gradually leading humanity into an unforeseen ruin through social networking. Although the internet is seen as a means of bringing people closer by eliminating the geographical “manacles” that exists between them, it is synchronously decreasing social skills especially face-to-face socialization. Physical interaction is gradually becoming history. Many people especially teenagers and young adults have sort a way to find solace on social media outlets like Facebook, Twitter, Instagram and the likes where they pour out their minds. “People with high social networking addictive tendencies report problems in various aspects of their life, such as poor sleep quality, impaired academic performance, and disturbed romantic relationships” (Yu, Shu, et al., 2016).

Additionally, technology with internet has given rise to the problem of cyber bullying, and invasion and/or breach of privacy. With the internet, it is very easy to get the private information of anyone. Indeed, technology is being utilized as a weapon far more effective and reaching than the simple face-to-face disagreements that used to exist. In the last few years, several cases of cyberbullying have been reported mostly because they led to the death of the victims. Several victims of cyberbullying are more likely to report emotional and health problems which can lead them to consider thoughts of suicide or other harmful solutions, thereby, making cyberbullying a “Serious threat to healthy child development and a potential cause of school violence.” (Smokowski and Kopasz, 2005). Finally, an inconspicuous or rather ignored effect that technology has on society is pollution. Industrial technology, the part of the technology that deals with manufacturing has always appeared to be fundamental to wealth and improved living conditions. However, this is not always the case as industrialization is a great contributor to environmental pollution which ultimately contributes to global warming. Many mechanical inventions: cars, fridges, air conditioners, etc. are powered by fossil fuels. Fossil fuel is one of the biggest contributors to global warming because of the methane gas it emits when burned.

Methane is a greenhouse gas that traps heat within the atmosphere thus contributing to global warming. Also, burning fossil fuels emits carbon dioxide, nitrogen oxide, Sulphur dioxide, etc. In industrialized countries, a significant amount of excess carbon dioxide comes from the burning of carbon-based fossil fuels. (Daniel, Bronwen, et al., 2004). The rate at which the world is changing is very rapid. The world has metamorphosed from its primitive way of life to a more advanced, modernized age where technological innovations now rule the world. There are so many undeniable ways technology has made life easier and more convenient such as improvement in communication, transportation, healthcare, education, etc. however, just as there is always a good in every bad, it is safe to say that there may also be a bad in every good. Maybe, just maybe technology does more good than harm but because we lack the social and mental discipline not to allow it become master over us, it will continue to remain a challenge not to be slaves to it especially as youths of today have grown to be overly dependent on its use. If society continues to lack the discipline and self-control to manage technology, its innovations will remain a cankerworm to society.

How Is the Technology Evolution Going. (2021, Dec 13). Retrieved from http://studymoose.com/how-is-the-technology-evolution-going-essay 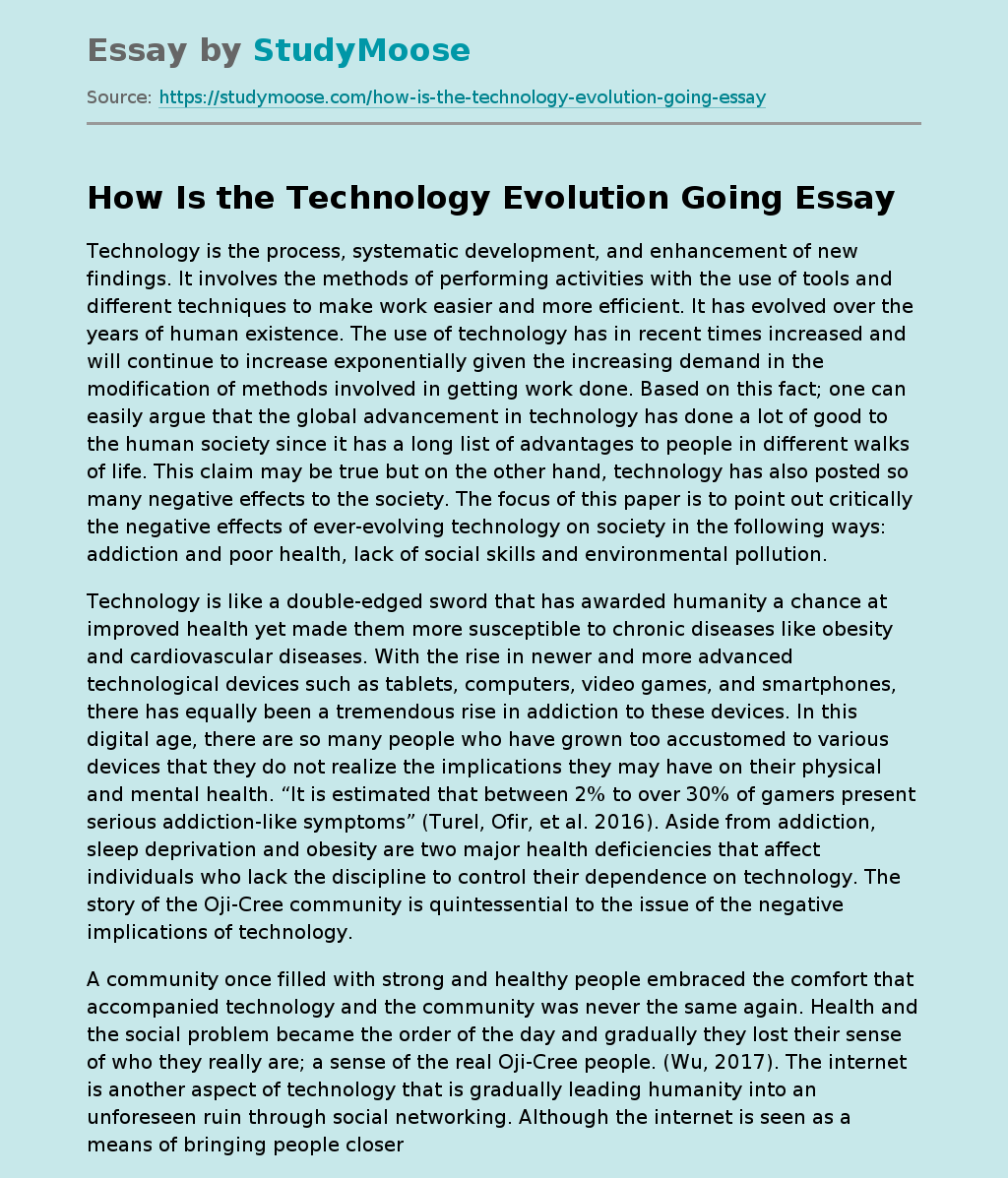