1. Explain current beliefs about how the first peoples settled North America, and discuss the ways in which they became differentiated from one another over time.
2. Describe the founding of European nations’ first colonies in the New World.

Turn in your highest-quality paper
Get a qualified writer to help you with
“ How First Peoples Settled North America ”
Get high-quality paper
NEW! AI matching with writer

The societies developed because they were now able to provide the necessary food source by growing crops. The crops gave them the ability to remain in one area for a longer period of time. There are many reasons that caused the various tribes to become differentiated from each other. Language caused a lot of issues among the different tribes. Territorial disputes, competition for resources, and traditions caused most of the instability between the settlers (www.betheluniversityonline.net, 2012). The land was the major issue among the settlers because it affected trade.

When Europe voyage was intended to expand their trading options. Few sought to create lasting settlements, and even fewer sought to colonize these exotic lands (www.betheluniversityonline.net, 2012). Wealth was one of the biggest lures to the European’s. The competitive profits from this wealth led to them to colonization and would give them the power to defend what they had discovered.

Portuguese would be followed by Spain and this would lead to the Pope’s intervention. He would draw a line from the North to the South dividing the land between the two. Spain would have claim to the West and Portugal would have claim to the East. Despite Portugal’s early ambition, Spain would be the first to establish colonies in North America (www.betheluniversityonline.net, 2012). This would lead the two to a war that ended in nearly annihilating the two because of death and disease. The Spanish colonization lead to the development armies called the conquistadors. The conquistadors would move in and devastate populations and take over the land.

This would lead to the enslavement of the Indians. You would then have the French and English to follow this adventure to the New World. Four reasons for the English to become more interested were Religious reformation from Catholicism, Social because the impoverished Englishmen were seeking to escape poverty, Economically investing stopped in the textile market looking for opportunities in the New World, and Geographically Queen Elizabeth’s Monarchy stabilized the throne and allowed England to participate in New World ventures (www.betheluniversityonline.net, 2012).

How First Peoples Settled North America. (2016, May 14). Retrieved from https://studymoose.com/how-first-peoples-settled-north-america-essay 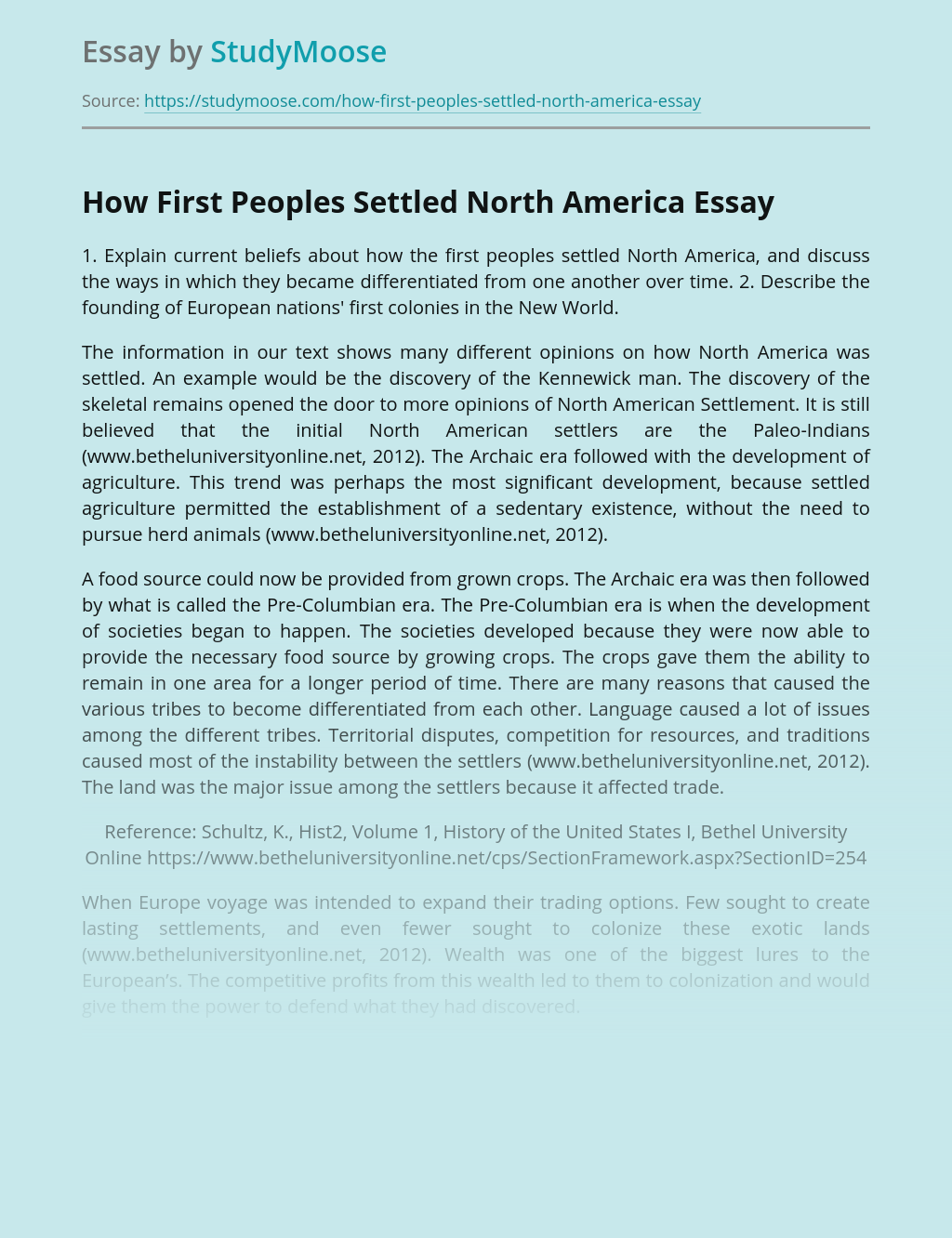 Turn in your highest-quality paper
Get a qualified writer to help you with
“ How First Peoples Settled North America ”
Get high-quality paper
Helping students since 2015
Stay Safe, Stay Original