In the 1600’s English settlers came to America seeking refuge, and land. Upon coming to America the settlers crossed paths with the natives and eventually lead to a variety of relationships. There were various factors that shaped the relations in certain regions such as the Chesapeake Bay and New England. The events that lead up to tension between the natives were the settler’s lust for new land, diseases and the on-going disputes between the natives and the settlers. In the Chesapeake Bay the Powhatans were originally the dominant power among the Native Americans.

Don't use plagiarized sources. Get your custom essay on
“ Indian Relations in Chesapeake and New England ”
Get custom paper
NEW! smart matching with writer

The Powhatan tribes flourished under the Powhatan Confederacy until the arrival of the Europeans. Tension arouse between the natives and the settlers as the new colonist began establishing their town and had a scarce amount of food leading them to raid the Powhatan’s food source. The natives fought back and attempted to restore their supply of foods when Lord De La Warr declared war against the Powhatan’s therefore marking the beginning of the Powhatan war.

The Powhatan villages were raided, burned and the cornfields were torched down cutting off their main food source. A peace treaty ended although it was shortly broken after the Powhatans attacked the Settlers due to them further expanding and into English territory. Like many wars the gain of territory is one of the fundamental reasons as to why many people start a war.

The Powhatan were defeated due to lack of unity despite of their confederacy while they were attacked by diseases and the Europeans advance weapons which gave the Europeans the upper hand.

Unlike the Powhatans and the English Settlers in the Chesapeake region, the relation between the Puritan Colonist and the natives started in mutual respect. The natives were first attacked by a new set of diseases causing nearly three-quarter of the population to die. Although the natives were introduced to diseases they befriended the Quakers. They formed an alliance and established the treaty with the Plymouth pilgrims in 1621 and aided the Quakers in celebrating the first thanksgiving. Despite the treaty and tension began when new English settlers began to migrate to America further settling inland to the natives’ region.

Like the Powhatan Indians the Pequot Indians were attacked where their homes were burned and the fleeing natives were shot. The Puritans then pushed forward to converting the natives into Christianity further creating tension through resistance from the natives. The Indians final form of resistance was the alliance between tribes in the war against king Phillip.

Roughly about 52 puritans towns were attacked at the end of the war where the English won. In conclusion the English Settlers came to America in search of land. The land-hungry settlers caused tension that arouse from the colonist moving into natives’ land as well as diseases and constant attacks to each other. The two regions share the commonality that both shared hostility between the natives and English settlers. 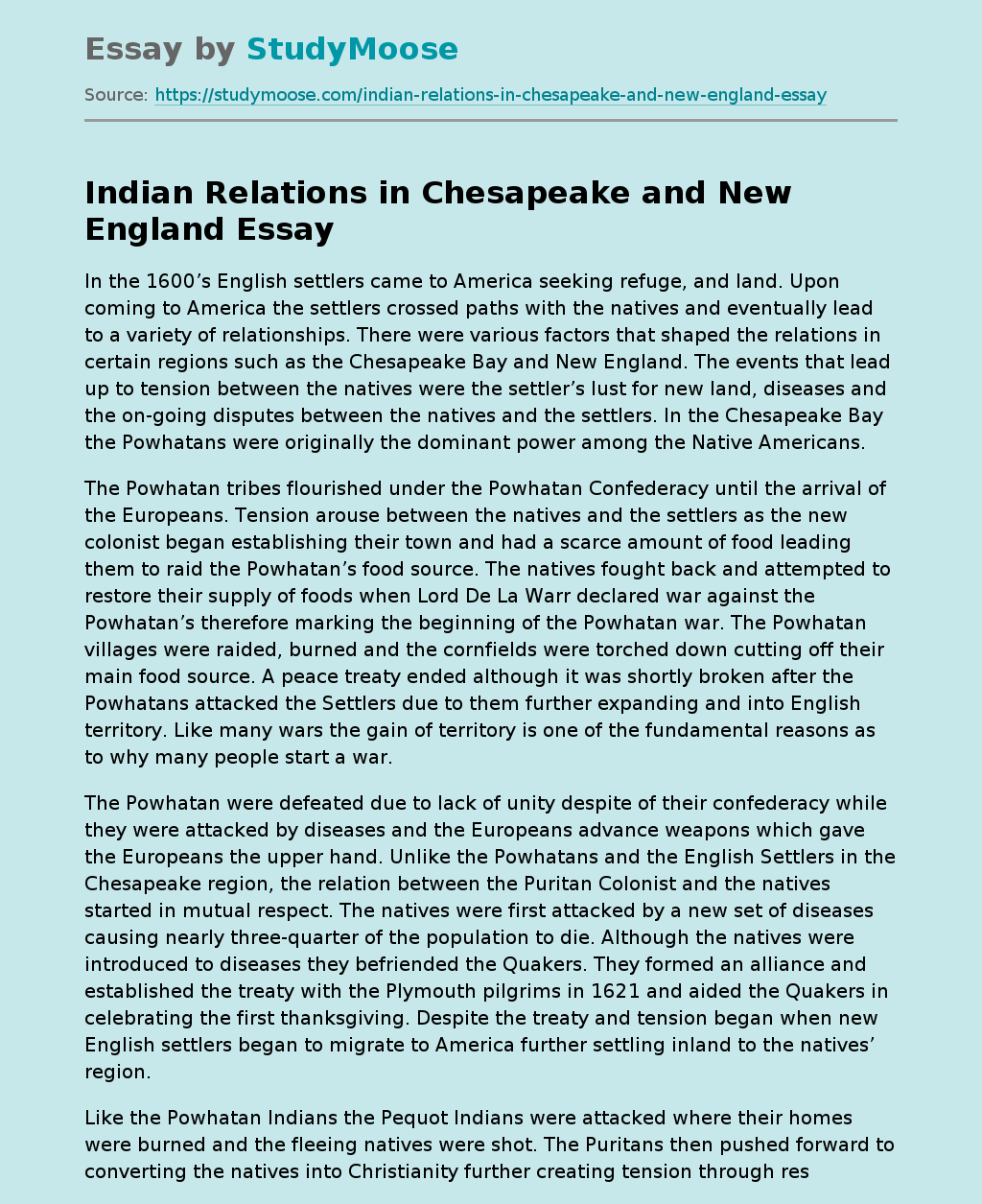