Summary of Chapter 1 from U.S a Narrative History

A big part of nomadic tribes becoming settled was their access to food. When they initially began their settlements, they were small houses with barns close by, they would grow simple crops such as corn and beans. These dwellings developed, over thousands of years, into fully functioning societies. One of the more notable groups of settlers were the Anasazi. The Anasazi had developed multi-level, apartment-like complexes. They would create earthen dams to utilize the little water provided in their desert environment, they also created pottery to help store their abundance of crops they grew from their irrigated fields.

Turn in your highest-quality paper
Get a qualified writer to help you with
“ Summary of Chapter 1 from U.S a Narrative History ”
Get high-quality paper
NEW! AI matching with writers

Many tribes also developed vast quantities of wealth, such as the Aztecs. The Aztecs had unsurpassed resources and power, making them the ideal society. They possessed a vast network of trade, most of their wealth was “tributes” from subjugated tribes in nearby provinces. They possessed large amounts of gold, silver, jewels and food to name a few. Some tribes began to enforce different forms of governance.

Some Muskogean-speakers embraced an egalitarian view. They believed that everyone was equal, from political, to economical standings, everyone was the same. This helped these tribes to cope with outside influence, they would eventually grow into three of the great southeastern Indian confederacies.

When the Spanish came to America, they brought with them a large amount of diseases that the natives had no immunity to. The Europeans had always been around each other in large groups, along with livestock, which helped them to develop hardy immune systems. Simple cases of measles and mumps could destroy whole villages.

The Europeans had endured these diseases in childhood, and thus developed strong immunities. Not having any farm animals or large groups of people made the Indians have a lack of immunities. Small pox was one of the most potent threats. In a matter of days, a whole village could be wiped out from little contact with the Spanish. Small pox was so devastating due to the fact that the affected groups would all be struck ill at the same time, leaving no one to help the sick. The native people were devastated from these diseases. In a matter of 80 years, their population went from approximately 25 million, to 1.3 million due largely to the
European diseases.

Summary of Chapter 1 from U.S a Narrative History. (2016, Apr 01). Retrieved from http://studymoose.com/summary-of-chapter-1-from-u-s-a-narrative-history-essay 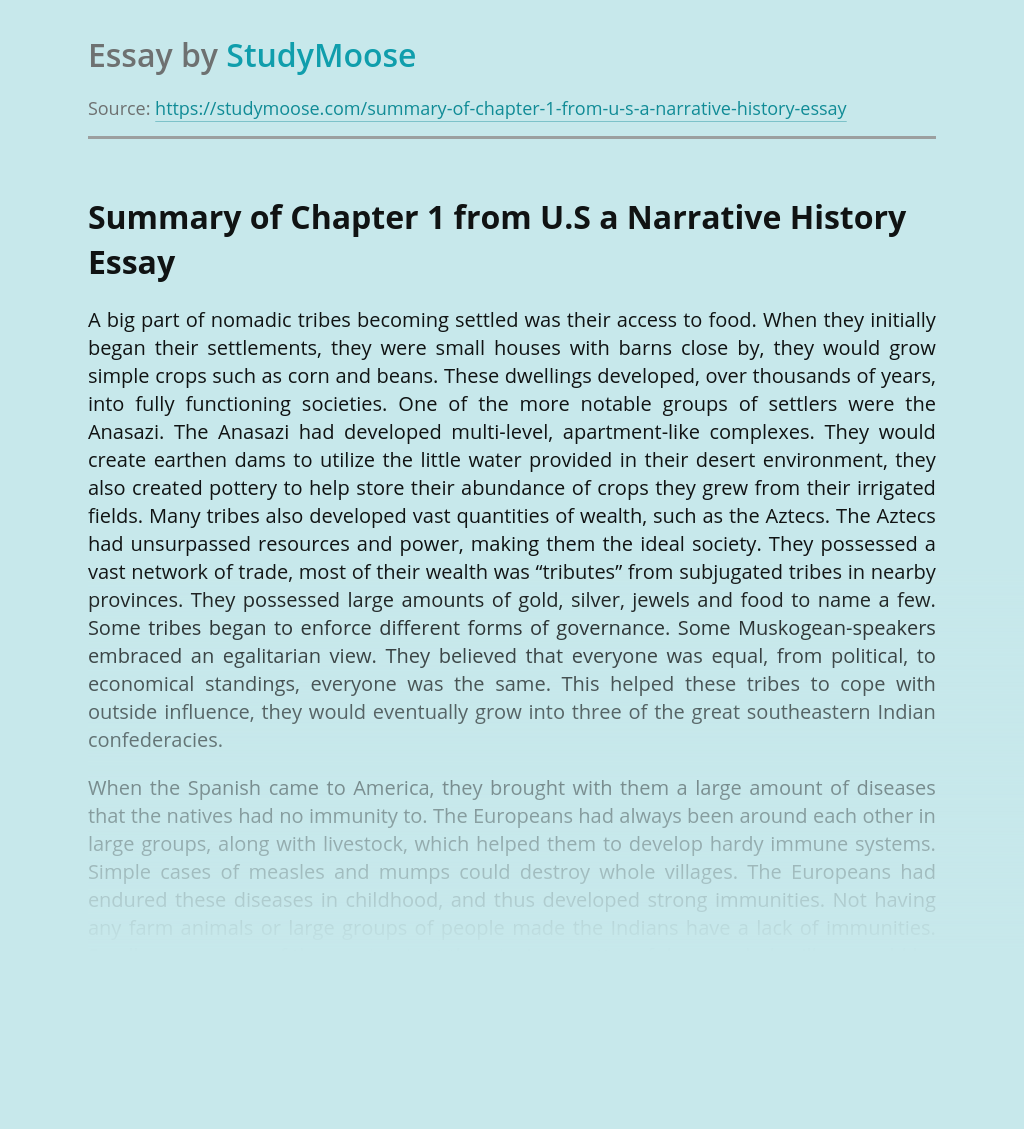 Turn in your highest-quality paper
Get a qualified writer to help you with
“ Summary of Chapter 1 from U.S a Narrative History ”
Get high-quality paper
Helping students since 2015
Stay Safe, Stay Original