Basically, Earth is not the only planet that supports life. In a broader sense, Earth is the only planet capable of supporting complex life forms. Other planets and their moons can sustain life such as that of bacteria but only the Earth can constitute evolution into more complex species. Major components that sustain life are water and oxygen and only Earth has an abundant supply of both. Futuristic views point to Mars as another planet which is capable of sustaining life because it is able to sustain life for bacteria and there are traces of water and oxygen.

Don't use plagiarized sources. Get your custom essay on
“ How Earth Supports Life? ”
Get custom paper
NEW! smart matching with writer

Earth is where all of us live in. Earth is the 3rd Planet from the sun, as well as the 5th largest planet in our solar system. As far as humans know Earth is unique in the Solar System as being the only planet which is able to support life in all its forms: from basic micro-organisms to highly sophisticated human beings. There are many reasons why this happens.

In this Research paper I will be dividing the reasoning into 5 parts. The list is as follows, * Atmosphere * Climate * Water * Light * Sun.

However, one problem is that all water on Mars is frozen in its polar ice caps. Earth is the only planet that is strategically positioned wherein water can remain in its liquid state in order to sustain life (Springboard Magazine). The Earth also has the right temperature levels. Mercury and Venus are too close to the Sun that the heat would make it impossible to sustain life.

Also, there is no sign of water on the planet. Uranus, Neptune and Pluto are positioned way too far from the Sun resulting in extremely cold temperatures which makes it impossible for humans or any other life forms to survive.

On the other hand, Jupiter and Saturn are formed from gas. Hydrogen, methane and helium make up the atmosphere of these two planets. They have no oxygen which is essential in sustaining life (Springboard Magazine). The Earth’s size and position also plays an important factor in the planets ability to preserve life. If the planet is larger, the pull of gravity would be greater which would affect the organisms living in the planet in a sense that hydrogen will not be able to escape from the atmosphere.

On the other hand, if the pull of gravity was less, oxygen would escape from the atmosphere which would make it impossible to sustain life. The planet’s rotation period is also perfect otherwise; plant life would not be able to survive (A Planet Perfect for Life) These are just some of the factors that describe why the Earth is perfect for the sustainability of life, particularly the complex life forms. Although there are discoveries that may prove that there are other planets that may be similar to the Earth that may support life, it is difficult to confirm because of such great distances.

As of now Earth is the only planet that has an atmosphere where lives can strive. What I mean by that is, Oxygen being the gas that is required for the life of most creatures. This is present in Earth’s atmosphere and also in water. Oxygen is constantly put into the atmosphere by plants and trees. Earth’s atmosphere also contains a small amount of carbon dioxide. This is a poisonous gas which makes up most of the atmosphere of planets like Venus and Mars and makes them incapable to support human life.

However, its smaller presence on Earth is useful as it helps to moderate the planet’s temperature and is absorbed by plants during photosynthesis to produce oxygen. Earth’s atmosphere is kept on the planet by its pull of gravity. Mars and Mercury are too small to keep atmosphere. As a result, Mercury has no atmosphere, and Mars’ atmosphere is very thin, containing gases which have not managed to escape into space yet. Earth’s atmosphere is thick enough to prevent poisonous rays of radiation from getting through it. Earth’s Atmosphere can be divided into 5 main layers. They are as follows, Troposphere – The troposphere is the first layer above the surface and contains half of the Earth’s atmosphere. Weather occurs in this layer. The troposphere is mostly heated by transfer of energy from the surface, so on average the lowest part of the troposphere is warmest and temperature decreases with altitude Stratosphere – To put it in context, many jet aircrafts fly in the stratosphere because it is very stable.

Also, the ozone layer absorbs harmful rays from the Sun. Temperature increases with height due to increased absorption of ultraviolet radiation by the ozone layer, which restricts turbulence and mixing Mesosphere – Meteors or rock fragments burn up in the mesosphere. Temperature decreases with height in the mesosphere. Thermosphere – The thermosphere is a layer with auroras. It is also where the space shuttle orbits. Temperature increases with height in the thermosphere from the mesopause up to the thermo pause, then is constant with height. Exosphere – The atmosphere merges into space in the extremely thin exosphere. This is the upper limit of our atmosphere. The exosphere is the outermost layer of Earth’s atmosphere, extending beyond the exobase at an altitude of about 600 km, that’s exactly 372.823 miles.

Earth has a suitable climate for life. This is caused by the moderate amount of carbon dioxide in the planet’s atmosphere, which is constantly refreshed whenever there is a volcanic eruption. Volcanoes are normally considered a disadvantages occurrence. However, Volcanoes provide resources for energy extraction, also called geothermal resources. Heat from the earth’s crust is being converted to energy. The big advantages to this type of energy are that it is very clean and the resources are nearly inexhaustible. When a volcano erupts it throws out a lot of ash. At short notice this ash can be very harmful to the environment, but on the long term the ash layer, which contains many useful minerals, will be converted to a very fertile soil.

This is a example as to exactly how earth has adopted. The temperature on Earth does not go from one extreme to the other either. Mercury can be anything from 200°c below freezing to 375°c above. At 375°c, water would only exist as a gas, and the planet would be completely dry. In Comparison, Venus has a surface temperature of 480°c, which would be much too hot for anybody to live in. Mars, although it can reach 25°c, can be as cold as -140°c, a temperature which would freeze blood and water. The other planets are colder still. Additionally an issue that we currently face in the modern World is Greenhouse emissions. This is a process that is slowing heating our climate causing increased temperatures. The process of the Greenhouse effect is shown in the picture below.

Earth has water! Water is believed to be the most important chemical necessary for life. It contains the oxygen needed for life. Other liquids contain poisonous elements. Water doesn’t burn skin (like liquids containing acids do), it is drinkable, and it allows life-providing molecules to move around easily. Other moons in the Solar System, such as Europa, a moon of Jupiter, are believed to have oceans of water under its icy surface. Scientists believe that, if they could find traces of water on Mars, the possibility of life existing on that planet would be greatly increased. Water on Earth can be found anywhere, in its three states. It can be frozen, taking the form of ice. It can be liquid, seen in seas and oceans and lakes. It can also be a gas, seen as clouds. In the picture below, we can see water in its three states; a solid, a liquid and a gas. The blue glow at the top of the Earth is the planet’s thin atmosphere.

All planets receive light from the Sun, but no planet uses it as usefully as Earth. Trees and plants on the planet produce oxygen through a process called photosynthesis. Plants need the Sun to grow. Look at plants in windows and notice how they usually seem to grow towards the Sun. Try growing a plant in a dark room and in a light room. Notice which one grows quicker. The one which has grown quickest is the one which also produces more oxygen. It is believed that if we were able to get plants to grow on another planet, such as Mars, they would begin putting oxygen into the planet’s atmosphere and increase the possibility of life. Saturn’s moon, Titan, has an atmosphere containing mainly nitrogen.

If this moon was to possess oxygen too in its atmosphere, by a plant photosynthesizing on it, it could have a similar atmosphere to Earth. Something else which helps the plants to photosynthesis on Earth is the length of time the planet takes to spin once on its axis. Taking just under 24 hours means that each side of the planet receives sunlight regularly. If we look at a planet like Venus, which takes 243 days to spin on its axis, it means that for a large period of time certain parts of the planet are in complete darkness. So even if the planet could support life, it would struggle to do so.

All of the reasons given above for life existing on Earth are only possible because of one main reason. The Sun! Put simply, if there was no Sun, there would be no life on Earth. Technically, Earth probably wouldn’t exist either! Because of Earth’s ideal distance from the Sun, it receives the perfect amount of heat and light to allow life to be created and to support it. Imagine what would happen if the Sun suddenly vanished. How would you keep warm? How would you see? How would you get food and drink? How would plants and trees grow? How would they photosynthesis? Where would Earth go? The Sun’s gravity keeps Earth in its orbit, but if the Sun vanished, Earth would simply float away.

Scientists can only make assumptions based on evidence but now, the only planet that is known to sustain human life is the Earth.

Earth is the only planet known to humans where life can exist. Every aspect of earth has been developed to support life. At the same time external forces such as the sun assists life in a great way as well. All these pieces of earth come together and join to make a planet that can sustain life. So it is our duty to make sure Earth stays healthy for many years to come. 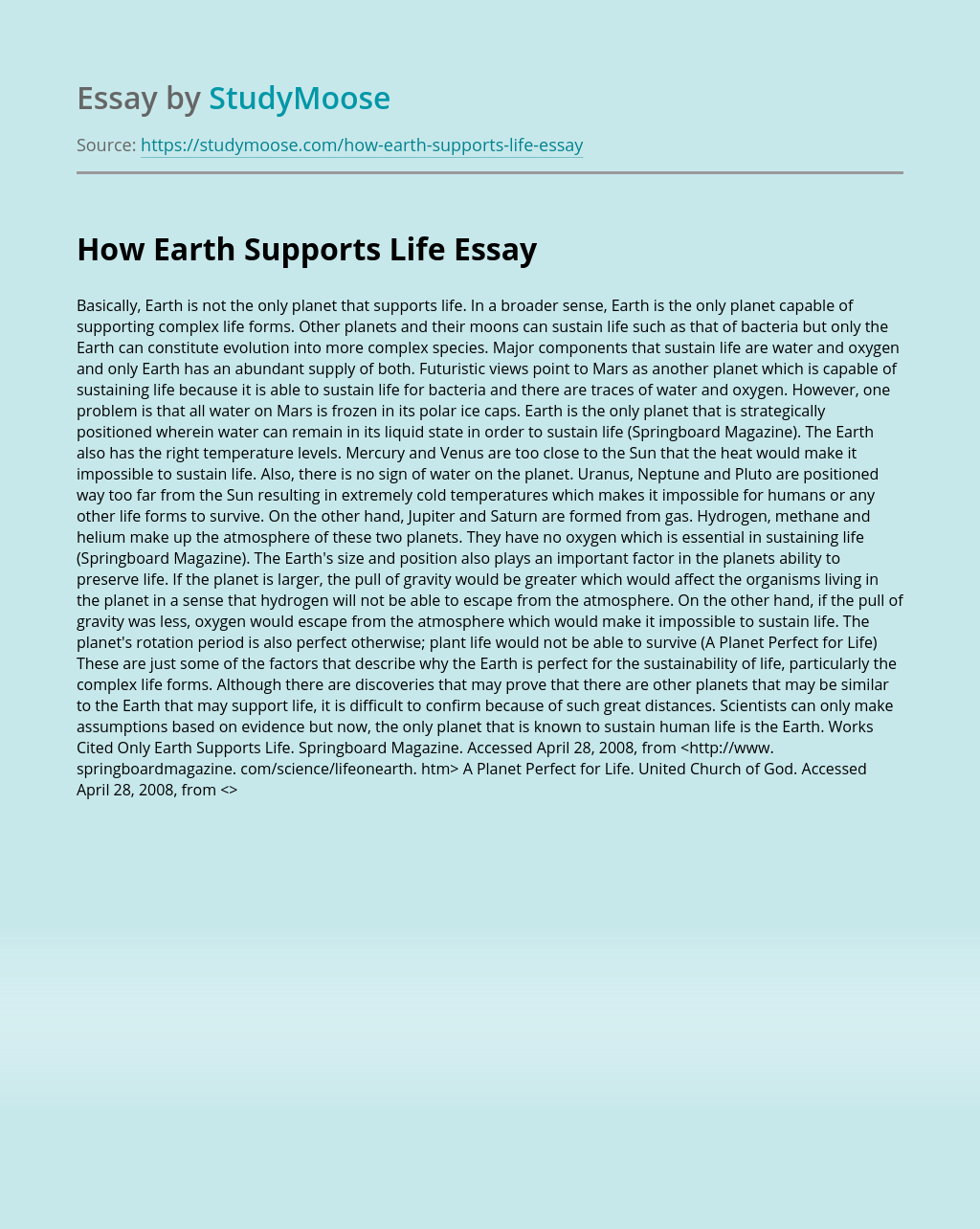