One of the most abundant components of all organisms is water. Around 3/4 of the earths surface is covered by water and it makes up 70% of human cells and up to 95% of the mass of a plant. With these kinds of statistics you can see why it is so important.

Water is a polar molecule meaning the distribution of electrical charge creates centres of positive and negative charge. These centres are separated by a short distance and the unequal distribution causes the polarity.

Don't use plagiarized sources. Get your custom essay on
“ Describe the Critical Role That Water Plays In Maintaining Life on Earth ”
Get custom paper
NEW! smart matching with writer

This polarity makes water a very good solvent. It attracts other charged particles such as ions and other polar molecules. These particles become much more reactive in solutions as they are free to move about and react with other chemicals. On the other hand, non polar molecules such as lipids are insoluble in water. When they are surrounded by water, the water molecules tend to attract each other pushing the non-polar molecules together.

One role of water is that of a transport medium both inside and outside the cell.

This is seen clearly in the blood as plasma is made up of over 90% water with soluble food minerals, hormones and urea dissolved in it. It is also seen in the vascular tissues in plant phloem transport of sucrose and amino acids in solution. All living things need continuing supplies of water to survive. A plant needs water to keep up the internal pressure or turgidity in its cells and tissues (which maintains the plant’s shape), to bring in dissolved minerals and raw materials from the soil, and for photosynthesis.

Transparency of water also plays an important part so that the plants that live under the water can still photosynthesis. The fact that water is see through means that light can pass through it and reach the green plants at the bottom of the ocean/lake.

Water also plays a key role in the metabolic breakdown of such essential molecules as proteins and carbohydrates. This process, called hydrolysis, goes on continually in living cells in reactions such as photosynthesis and digestion as its supplies the hydrogen.

The high heat capacity of water means that it takes a lot of energy to change the temperature of 1 gram of water by 1ï¿½C. As a result of this it means water is very good at maintaining a steady temperature as the hydrogen bonds restrict movement. This is very important for a number of reasons. For example the temperature of oceans and lakes are slow to change, therefore creating a stable habitat for organisms as they do not have to endure rapid and extreme changes. These thermal properties are also important to help mammals whilst maintaining a constant internal body temperature. A great deal of energy is required to change liquids to a vapour so when mammals sweat or pant, the heat used for the vapour to evaporate is lost from the body, therefore cooling it down.

One of the major things that make water unique is that its solid form is less dense than its liquid form. This is why ice floats. The ice forms an insulating layer which prevents the water underneath from freezing. If ice was denser then the water, the pond would freeze from the bottom up, killing all the living organisms within it. However with the density properties being as they are water is most dense at 4ï¿½C. This means even when a pond is frozen over there is a layer of water below the ice at 4ï¿½C where organisms can survive.

Polar molecules allow the formation of hydrogen bonds and although these are weak alone, there are lots of them so they stick together to make a strong lattice arrangement. This sticking together is called cohesion. This means the long columns of water molecules don’t break.

At the air/water interface of a pond the cohesion produces surface tensions. This acts almost as a layer of skin over the water. At ordinary temperatures water has the highest surface tension of any known liquid except mercury. Insects, such as pond skaters, exploit this property. The insect’s body is supported by the high surface tension allowing them to settle or skate over its surface.

It is clear that water plays an important role in many aspects of life. It provides a medium in which all biochemical reactions take place. It is abundant across the surface of the world and has a number of unique properties which promote and sustain life on earth.

Describe the Critical Role That Water Plays In Maintaining Life on Earth. (2020, Jun 01). Retrieved from http://studymoose.com/describe-critical-role-water-plays-maintaining-life-earth-constituent-living-organisms-environment-new-essay 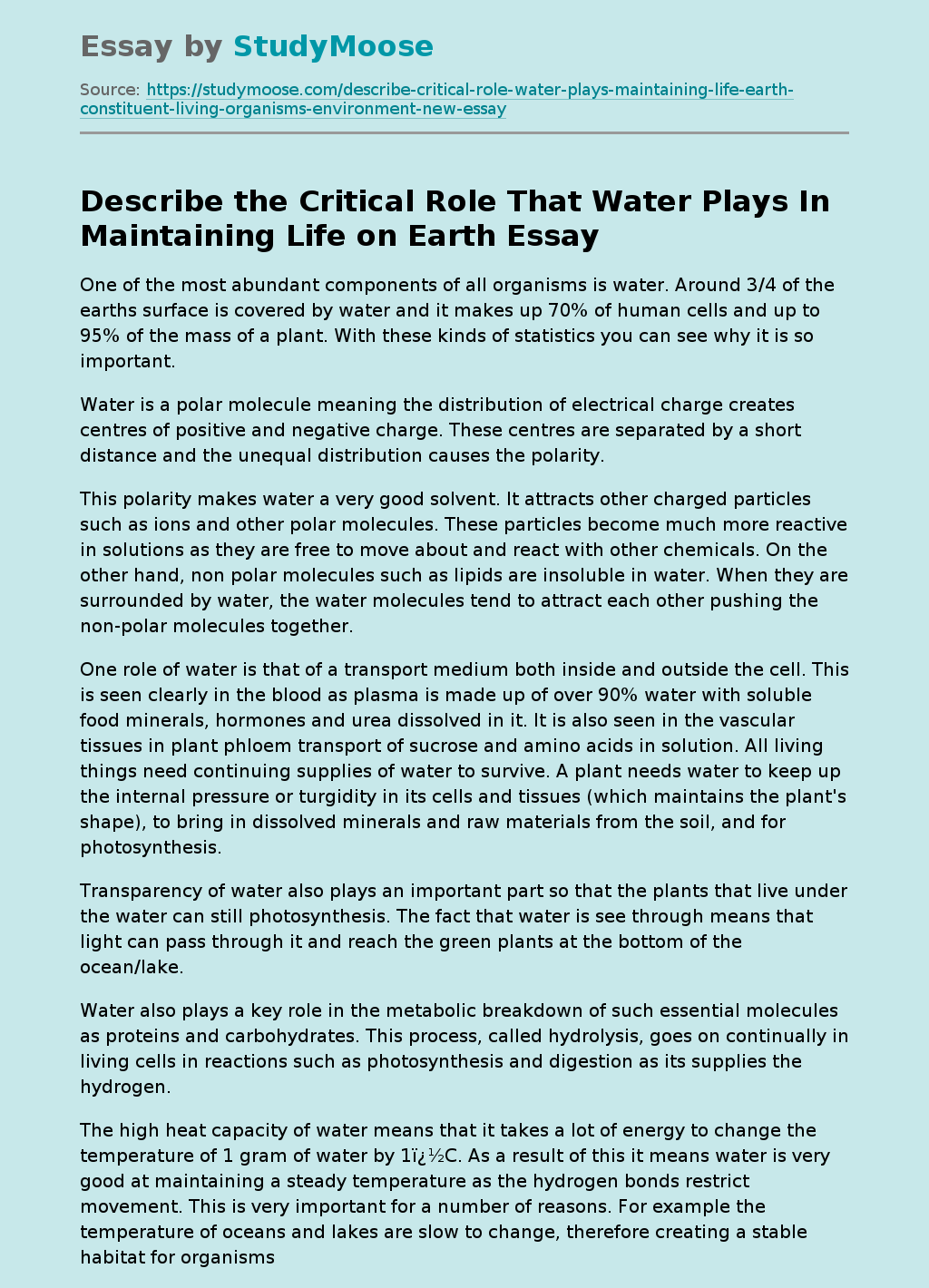