Compare and Contrast a Life Raft, an Island, and Earth

Survival is a key part of life in which humans have been attending to throughout our entire existence. As time progresses, technology and knowledge not only increases but also improves. Eventually, we develop to the point where our educational system has an important and crucial question where the students are asked to compare and contrast a life raft with emergency supplies in it, a moderately sized island, and Earth itself. The three subjects have a number of similarities and differences; however, some are obviously more important than others.

Don't use plagiarized sources. Get your custom essay on
“ Compare and Contrast a Life Raft, an Island, and Earth ”
Get custom paper
NEW! smart matching with writer

Read Also: Topics for a Compare and Contrast Essay

There are quite a few similarities between a life raft, an island, and Earth, all of which are just as obvious as the differences. Each of the three can carry things in them. The Earth and an island hold many different things on their land, including us humans. A life raft can, and is meant to, hold things such as emergency supplies or people in it.

More obviously, each of the three is in a solid state of matter. Also, each of them has its own gravitational pull or influence. Earth has its own gravitational pull; so naturally, things that are located on Earth are influenced and affected by gravity. Lastly, each of them (can) support life. Earth, itself, is supporting life for a huge number of organisms and beings at this very moment. An island supports not only a number of plants, but also some animals and other organisms as well. A life raft, or life boat, is meant to help people safely distance themselves from a larger ship or boat disaster. Because a life raft has emergency supplies, it will support human life until they run out.

With similarities, there are also differences within the life raft, island, and Earth. While Earth and the island is an ecosystem supporting a vast and diverse number of species and organisms, a life raft is merely just a lifeless boat. The island and Earth are also part of each other, while the life raft is more of an object that is used by humans. The island is literally a part of Earth, they are one thing. However, the life raft is not a part of Earth; it’s more like a Third Party Program that is used along with the main server or program. This also leads to the fact that the life raft is man-made, rather than being organic like Earth or an island. Obviously, we humans did not create Earth. And in normal circumstances, humans also do not create islands.

Comparing and contrasting a life raft with emergency supplies, a moderately sized island, and Earth is truly a random and odd thing to do. However, doing so would prove that everything has at least a similarity and difference. Where there is a similarity, there is also a difference. It could be an obvious and blatantly clear similarity or difference, or it could also be a well and critically thought comparison. In conclusion, the man-made life raft seems to be the center of difference and the background character of similarities.

Compare and Contrast a Life Raft, an Island, and Earth. (2016, Sep 18). Retrieved from https://studymoose.com/compare-and-contrast-a-life-raft-an-island-and-earth-essay 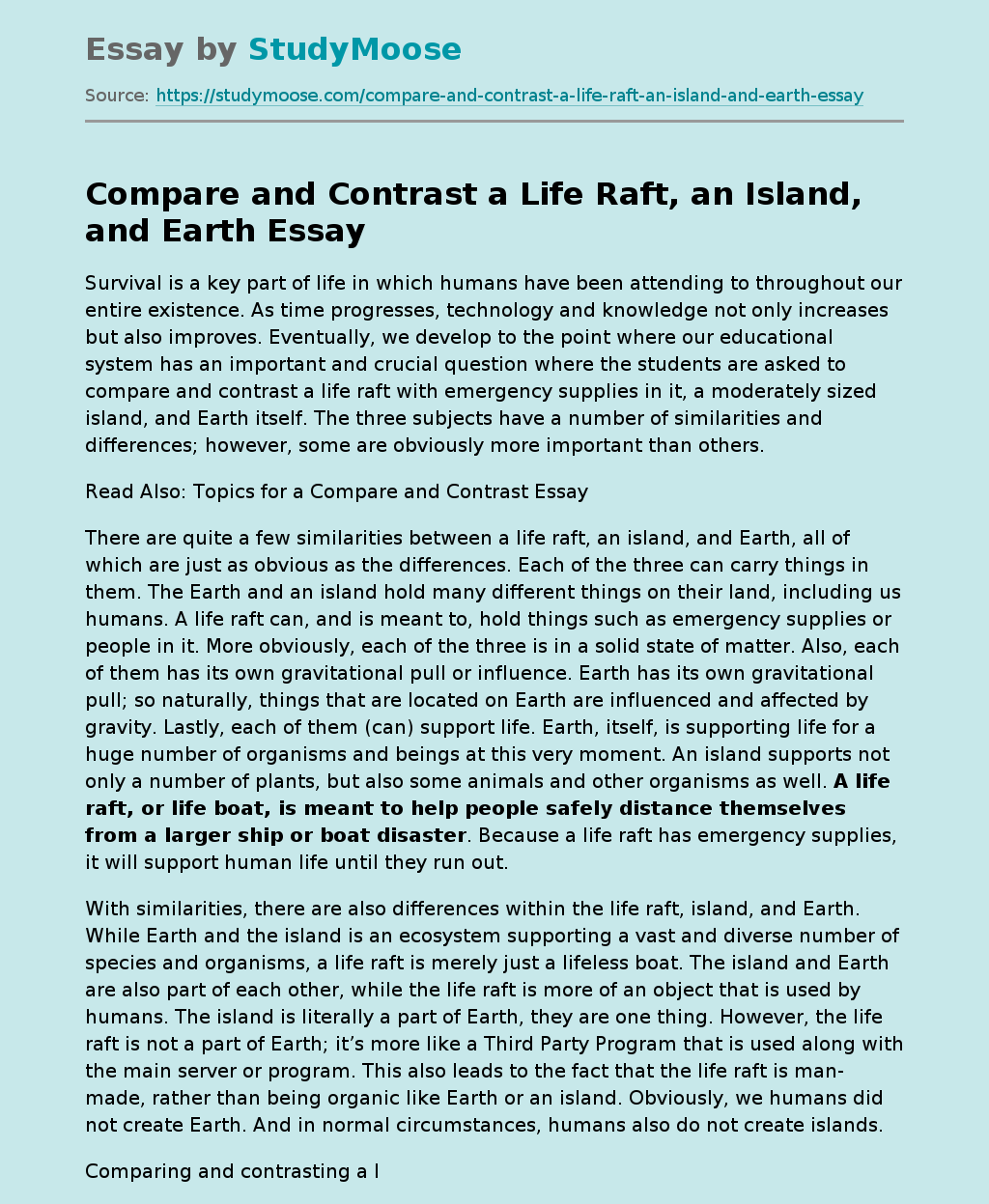