How Does Othello's Character Change Throughout the Play?

In order to understand how Othello changes throughout the play, we have to first take a look at the types of the relationships in the play as his behaviour changes directly links to the influences by the other people whom he has deep relationships. There are two types of relationships, one that is between female characters and between male characters. Both have deep bonds between each other. However women friendships are more emotional. Emotions are very strong and are deeply intertwined with trust.

Turn in your highest-quality paper
Get a qualified writer to help you with
“ How Does Othello’s Character Change Throughout the Play? ”
Get high-quality paper
NEW! AI matching with writer

Love, hatred, jealousy and admiration are often mixed up and polar emotions show how strong the bond is.

This also links that women are more vulnerable to be influenced, however once a strong bond is formed, it is hard to tear it apart, even though they can be quite sensitive. Within the men friendships, it is apparent that men do not heavily rely on their emotions and they have mutual understanding, “I have your back and you have my back”.

Othello did try to not believe Iago so easily but the circumstances were in his favour because Iago’s wife was doing Iago’s dirty work without even knowing.

He was also wrong about Iago not only about the fact that he was honest but the fact that he thought Iago would be truthful to him even after not giving the promotion to him. Shakespeare transformed the one he found in the story, and invented the character of Roderigo to bear that vulgar part. Then he invents a second motive for Iago, and makes him hate Othello also for his supposed relations with Emilia.

By way of revenge for this offence, Iago’s first impulse is to try to corrupt Desdemona, and thus get even with Othello. But how little this was his intention is seen by the fact that he never seems to have seriously considered it. In place of this, however, he has an alternative that becomes his ruling motive, to put Othello into a jealousy of Cassio. This he thinks will serve to revenge himself on Othello for both offences at one blow: And nothing can, or shall content my soul

Till I am even’d with him, wife, for wife.
Or failing so, yet that I put the Moor
At least into a jealousy so strong
That judgment cannot cure.
(II. i. 331-5.)

Othello is also gullible, he trusts men more than women because he might not understand women and their relationships. He gives us feeling that he believes in stereotype women which are wicked, vulnerable, twisted and are traitors who lie all the time. Ironically, that stereotype applies to Iago whom Othello trusts more than his beloved Desdemona. The main villain who affected Othello the most has a hatred motive however hatred is supposed to have a cause, some concrete event or insult that inspires a lasting rage.

But in Othello, the play’s villain is motivated by a hatred that seems to elude any reasonable definition. Iago’s hatred and his determination to destroy his boss Othello, seems out of proportion with the reasons he gives for it: anger that Othello did not promote him or jealousy that Othello might have slept with Iago’s wife. Iago’s loathing has been famously called a “motiveless malignancy” that redefines our understanding of hatred, making it seem a self-propelling passion rather than the consequence of any particular action.

How Does Othello's Character Change Throughout the Play?. (2017, Apr 02). Retrieved from https://studymoose.com/how-does-othellos-character-change-throughout-the-play-essay 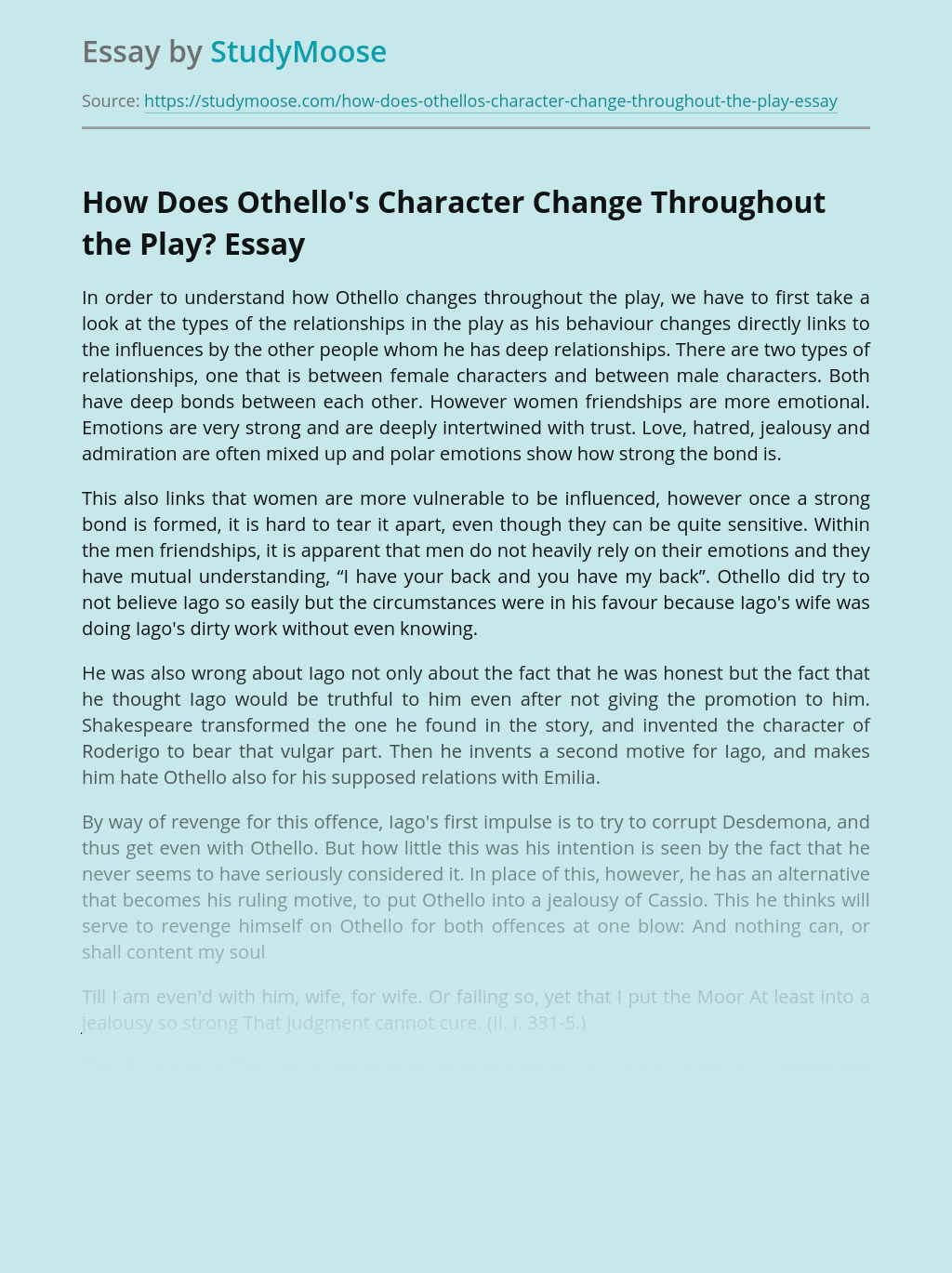 Turn in your highest-quality paper
Get a qualified writer to help you with
“ How Does Othello’s Character Change Throughout the Play? ”
Get high-quality paper
Helping students since 2015
Stay Safe, Stay Original