High Schools Should Be Able to Sell Junk Food

High schools should be able to sell candy, chips and soft drink. If “variety is a spice of life” than why shouldn’t it apply to younger people? Recently schools have been taking into consideration depriving students of branded “unhealthy” foods in canteens such as candy, chips and lollies. They condemn junk food as the cause for obesity and believe that by banning it completely, the problem will disappear. Banning junk food from schools won’t change anything or stop people from being overweight completely.

Don't use plagiarized sources. Get your custom essay on
“ High Schools Should Be Able to Sell Junk Food ”
Get custom paper
NEW! smart matching with writer

What label is put on unhealthy, where is the line drawn? There is a fine line between certain healthy and unhealthy foods; some could even be labelled as either. A hamburger for example generally contains meat, bread and salad. A sandwich on the other hand contains pretty much the same thing! Does that mean that sandwiches should also be banned from schools? For daily nutrients a variety of foods is needed, everything in moderation of course.

Certain foods shouldn’t just be eliminated from a person’s diet. Think of the food pyramid (the amounts we should have the most to least of), people should have breads; pasta’s and rices the most. Then have vegetables and fruits. Next on the pyramid are eggs, dairy and meat. Last but not least are fats, oils and sweets. While fats, oils and sweets should be consumed the least, they are still needed and important for our body to function well. Unhealthy foods should still be kept in schools as people should know to eat in moderation.

Students are constantly reminded about healthy eating. All throughout primary and high school students are taught in PE the healthy food pyramid and the dangers of eating too much of one food. Students being mature and well educated should be able to choose what they want to eat, knowing the consequences of their actions. Letting them make their own choices also sets them up for life in the real world, as they need to realise that everything has consequences, whether good or bad. While some may argue that children obviously can’t make the right choices, I beg to differ. While people blame adolescent’s obesity on their eating habits, there is another factor that isn’t seen. Another reason for child obesity is lack of exercise. In this day and age most children’s form of entertainment comes from a screen, whether it be Playstation, Wii, Xbox or even just their phones. Sure, people still attend sporting clubs and such but the amount of people who do has dropped dramatically in the last 20 years. Majority of people 20 years ago played outside games for their entertainment, getting the amount of exercisenecessary to burn fat and be healthy. Students are mature enough to make their own choices and shouldn’t have to be sheltered.

If they take away junk food, not only are they taking away kids freedom of choice but they are taking away their enjoyment too. A school in Seattle is considering relaxing it’s ban on unhealthy foods in high schools after the policy has cost them hundreds of thousands of dollars. Moreover, opponents of the ban say it’s not even accomplishing its mission of preventing kids from eating bad foods; as many students just go to milk bars to buy products they used to buy at vending machines. The revenues are down by more than $50,000 dollars a year which has caused the school to cut back on funding to a range of student activities, with poorer families unable to attend. A member of the board admitted “I think we went a little too far.”(www.seattletimes.com.)From this example it’s evident that while people believe strongly about banning junk food, they need to ask themselves some questions, is it really for the better? Will it just make things worse? Not many bought the healthy foods and because of that others had to suffer. Poorer families who can’t afford to pay for extracurricular activities will be forced to not participate, providing their kids with fewer opportunities than the rest. While others may say that students will eventually get used to the healthy foods, they need to read this article. According to the article they trialled this ban for seven years, with the profits not getting any better. If they want to wait they will be waiting forever because it will never change. Sure it might just be this be this school but if it happened there then what reason is there that it wouldn’t happen here?

There needs to be a middle ground, where they don’t take the ban to an extreme as there are good intentions for the ban. School canteens should sell both types of foods but make healthier foods a cheaper option than fatter foods. Banning junk food from schools won’t change people’s eating habits or stop people from being overweight. Both unhealthy and healthy foods are needed for a healthy diet but in moderation. Schools should make healthier food an easier and more affordable option for people to buy at canteens. As the old clique states; don’t throw the baby out with the bath water.

High Schools Should Be Able to Sell Junk Food. (2016, Apr 04). Retrieved from https://studymoose.com/high-schools-should-be-able-to-sell-junk-food-essay 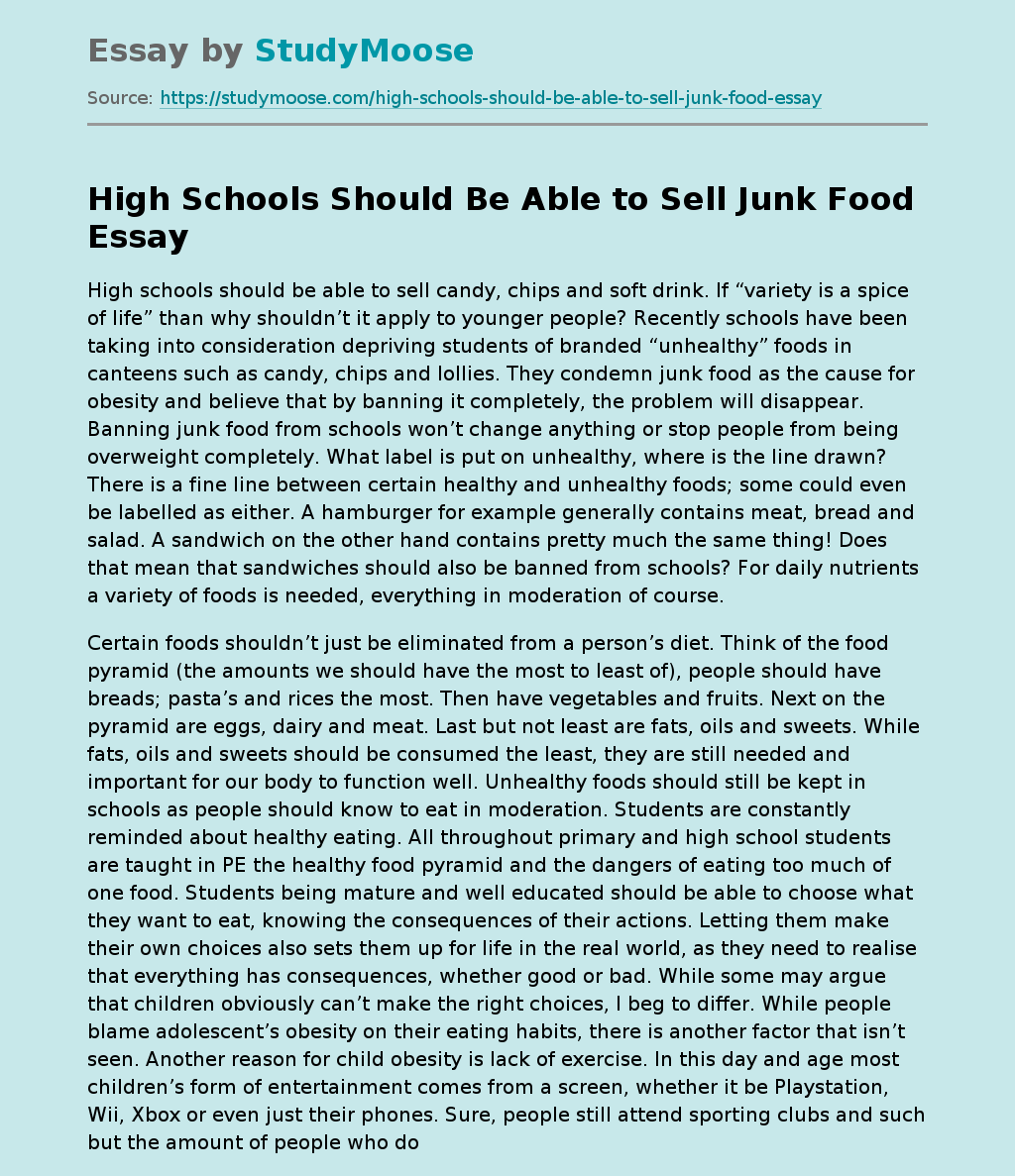