Is life in prison without parole better than the death penalty?

Don't use plagiarized sources. Get your custom essay on
“ Is life in prison without parole better than the death penalty? ”
Get custom paper
NEW! smart matching with writer

Many believe that this is the right way to punish criminals in society, although there are many faults with capital punishment as well. Those faults consist of errors in the system, state costs, and the risks of executions of innocent people. Life in prison without parole is better than the death penalty where the death penalty is the foundation in injustice and it is immoral.

People supporting the death penalty often argue that capital punishment is required not only for retributive reasons but rather to prevent the taking of innocent lives.

Cass R. Sunstein, Professor of Law at Harvard University Law School, and Adrian Vermeule, another professor at Harvard Law School said “A leading national study suggests that each execution prevents some eighteen murders on average.” What my question is, how does taking away a criminals life prevent a life of an innocent being taken away? Killing a culprit does not prevent murders from happening, because there are still killers outside of jail.

Death row does not prevent homicide happening in the outside world. The death penalty is no more effective in deterring others than life sentences. Life without parole also prevents reoffending. It means what it says, spending the rest of your life locked up, knowing you’ll never be free. Leading up to my next point, life without parole costs less than the death penalty.

The death penalty is much more expensive than life without parole. It requires a long process for capital cases, which is needed in order to make sure that innocent individuals are not executed for crimes they did not commit. If the death penalty was replaced with a sentence of life without parole, which costs millions of dollars less, a lot of money could be saved for useful necessities. The millions of dollars could be spent on education, roads, programs, and more. Capital punishment is time consuming and expensive than the typical crime cases. Speaking of the innocent, my next point, an innocent person serving life can be released from death row.

The system can make tragic mistakes. According to the editorial “There is No ‘Humane’ Execution”, since 1973, 139 people have been released from death row because they were proven innocent said by the Death Penalty Information Center. We’ll never know for sure how many people have been executed for crimes they didn’t commit. DNA is rarely available in homicides, often irrelevant and can’t guarantee we won’t execute innocent people. A number of innocent people have had to been put to death, which contradicts with the true meaning of justice. Leading to my final point, that capital punishment is immoral and is foundation of injustice.

It is barbaric that people siding with capital punishment consider it moral. If anything, death penalty contradicts the true meaning of justice. In the article “Is Life in Prison without Parole a Better Option than Death Penalty?” John P. Conrad, former Chief of Center for Crime Prevention and Rehabilitation at the National Institute of Law Enforcement and Criminal Justice said “I hold that the execution of the most contemptible murderer conflicts with the true functions of retributive justice- the repudiation of evil done and the prospective reconciliation of the criminal with the community he has wronged.” Capital punishment is immoral and unfair and discriminatory in practice. No one deserves to die. In civilized society, we reject the principle of literally doing to criminals what they do to their victims. For instance, if the culprit’s crime was rape, his punishment cannot literally be rape. We shouldn’t punish the murderer with death. Capital punishment shows what an uncivilized and immoral society we are.

The sentence of capital punishment is a barbaric action for punishment a criminal. Murder is unacceptable by society, yet people seem to approve killing criminals. Sentencing a criminal to death does not solve the questions and problems left behind, it just creates controversy. Capital punishment is wrongly practiced and immoral and the wrong way to punish criminals. Life in prison without parole is a much better option, whereas capital punishment is just a way to seek revenge on the individual who would rather have the darkness of a solitary than not to see the dark at all.

Is life in prison without parole better than the death penalty?. (2016, Feb 24). Retrieved from http://studymoose.com/is-life-in-prison-without-parole-better-than-the-death-penalty-essay 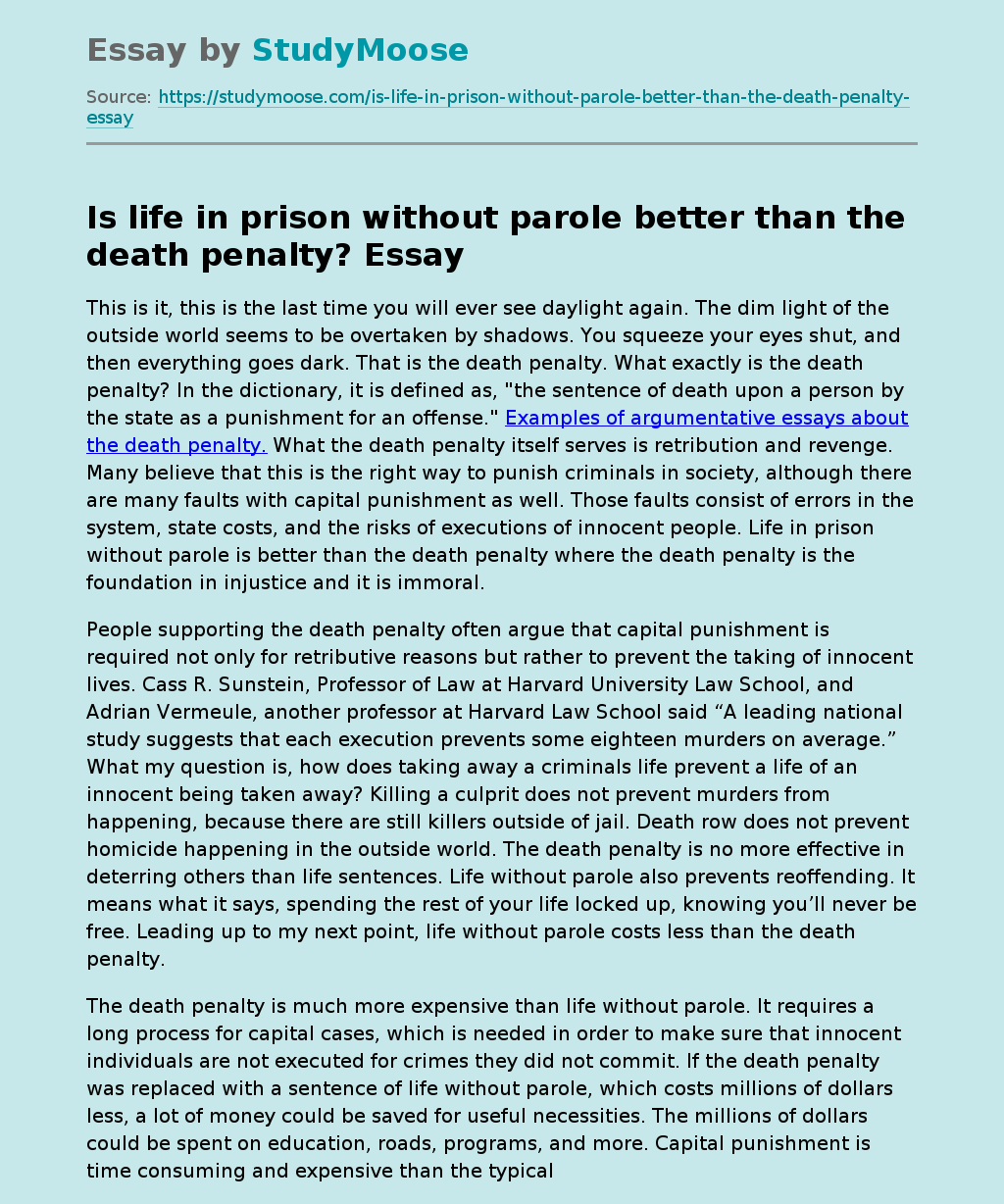