Alexandra Brito Phi 231/Bulnes Final Paper The Death Penalty Retribution is defined as a justly deserved punishment. Mainly used as a term that justifies the death penalty. In Retribution, the connection between punishment and guilt is that punishment is what justice feels that the criminal deserves for their crime. While guilt is when the criminal is sentenced and ensures that the punishment is sufficient to deter the guilty person from committing the same crime. The connection between punishment and guilt is that legal punishment must always be a response to guilt.

Don't use plagiarized sources. Get your custom essay on
“ Death Penalty Vs Life In Prison Essay ”
Get custom paper
NEW! smart matching with writer

A criminal that knows he/she is guilty for the crime they committed should get the right punishment under law. According to Gregg v. Georgia (1976), “The instinct for retribution is part of the nature of man, and channeling that instinct in the administration of criminal justice serves an important purpose in promoting the stability of a society governed by law”. Society shouldn’t have to take matters into their own hands.

People argue that the death penalty is morally wrong because a criminal’s punishment should not be measured with what they inflicted on their victims. No matter what they did they are still human beings.

There have been a lot of disagreements about whether the death penalty is morally correct or the right thing to do. I will show two different points between Thurgood Marshall and Burton Leiser through their Kantian arguments. Marshall’s Kantian argument says that the offender is still a human being despite of the crime that they have committed.

Unlike animals, human beings are rational and they understand their surroundings. Killing is wrong no matter who does it and who may deserve it. Human beings should not be killed as if they meant nothing. Marshall uses the word “disposing” in regards to using capital punishment on offenders.

It is believed that the government should be responsible for instilling good values in its citizens, and not kill them off when they stray from the principles of such values. By murdering a criminal, the “eye for an eye” theory has accomplished nothing, for it has not genuinely made them experience self-hate or retribution. The 8th amendment states “Excessive bail shall not be required, nor excessive fines imposed, nor cruel and unusual punishments inflicted. ” This says that nothing that should be brought upon the offender should be in an excessive amount.

It is legally and morally wrong to use a punishment in which it is degrading to human dignity. Burton Leiser thinks otherwise. Leiser’s argument on capital punishment is that it is morally okay for at least one punishment. If the crime committed is severe enough than the death penalty should be used upon the offender. This will create more utility to the victim, the victim’s family and to its society if the offender was to be put to death. Simply, condemning a criminal to life imprisonment with or without the possibility for parole just isn’t enough for those who believe that the death penalty is right.

Leiser’s argument relies on the Purely Retributive Justification. He believes that every crime deserves their punishment under the principle jus talionis or “eye for an eye. ” Leiser thinks the same if it was the criminal was either handicapped or a child. If the child or handicap (whether insane or physically handicap) doesn’t care about human worth or dignity, then why should anyone else care about the criminal. This is where Marshall and Leiser’s thoughts come into disagreement when the problem with human dignity and value is called upon.

If the criminal kills someone and then he is killed afterward for his crime then it means that we, as the community, have failed to recognize his value as a human being. Marshall says that killing someone is just wrong. Regardless of their crime, putting someone to death is just a ‘cruel and unusual punishment. ’ We human beings are made from flesh and bone and neither one of us has the right to take away anyone’s life. Whereas, Leiser thinks that if a criminal takes away someone’s life, then it should be done to them also.

It seems like Leiser takes the Golden Rule, “do unto others as you would have them done to you,” word for word. In Kant’s Concept of Person, it is connected with the concept of dignity in which no one calls the dignity of a person into question. Treat all persons as an end and not as a means only. “Act in such a way that you treat humanity, in whether in your own person or in the person of any other, never merely as a means to an end, but always at the same time as an end” (Immanuel Kant, Groundwork of the Metaphysic of Morals [1785] (1993)).

Kant mentions that doing what is right for the right reason is important, especially for a Kantian. Kantian morality is not significant, which means that actions are based on the will of a person, and not on the consequences that comes from the action. For example, Kant believes that lying is wrong no matter what situation, even if it means to save someone’s life. I think Kant contradicts himself when he says that lying to save someone’s life is wrong, since he looks only at the act of lying and not at the motivation which is good will.

Kant relies on the notion of Free Will in grounding the value of persons. According to Kant, under no circumstances, no person can be forced to abandon the three moral virtues–God, freedom and immortality– unless the person chooses to do so. Every person has the right to believe in these three morals. I believe that the death penalty should not be used because according to Kant’s ethics killing is always wrong. It isn’t right for a criminal to have killed their victim, so what gives us the right to take his life away too; whether it was an act of vigilance or under capital punishment.

Everyone has a right to live no matter how severe their crime was. He also said that lying is always wrong. If they take the same steps to use the death penalty on a criminal as they would with lying, then that would mean that as punishment, we would have to lie to the person who lied to us in the beginning. With this reason Kant contradicts himself because if we should live our life by the Golden Rule, then the killing will never end because you (government) would seem to expect that someone should kill you too. 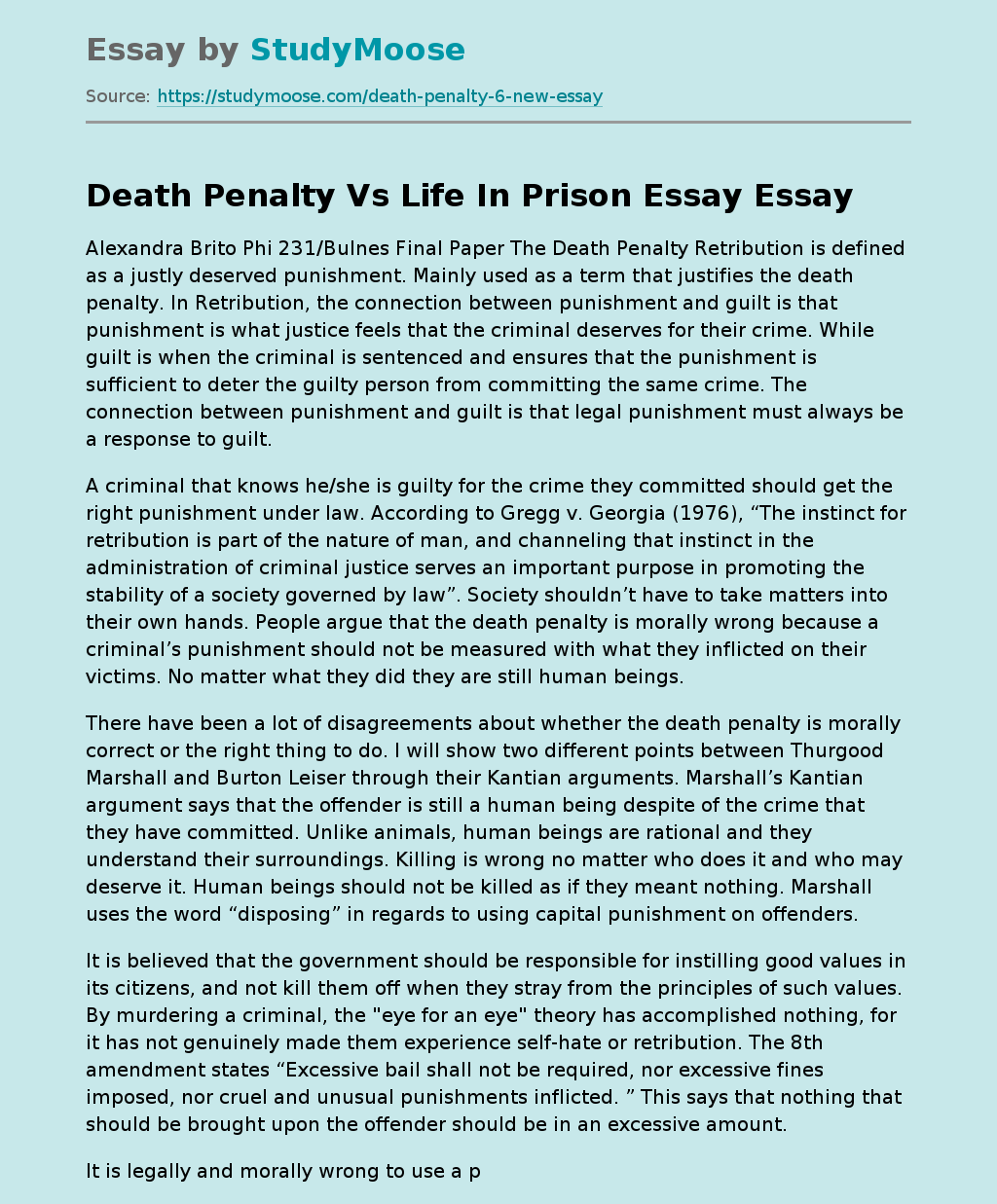