In recent years, skipping breakfast become an unhealthy habit practiced by the young generation. In fact, all of us know that breakfast is a vital element for a healthy lifestyle and contribute a lot in the learning process. Based on the studies done by researchers, breakfast is important in providing energy throughout a whole day for a person compared to lunch and dinner which enables them to focus more on their works. Regarding the surveys done earlier, there are 7 out of 10 people not eating breakfast before starting their own life in a day.

Don't use plagiarized sources. Get your custom essay on
“ In recent years skipping breakfast become an unhealthy habit practiced by the ”
Get custom paper
NEW! smart matching with writer

Skipping breakfast is even more evident in college going students. This may be due to the reasons that some students wake up late in the morning or they do not have this habit since they were young. Besides, there is no one preparing for their breakfast such as parents during the college life especially for those study away from home. A lot of studies mention the importance of breakfast in a student’s academic performance.

It is necessary to carry out this research because most of the researches conducted are among the children which are studying in primary or secondary school. Therefore, this research would like to be carried among the college students to show whether the breakfast intake can affect their academic performance. Another reason is this research is significant to motivate students to practice a healthy lifestyle by eating breakfast every morning by highlighting the bad effects of skipping breakfast on the academic performances.1.2 Statement of problem This research highlights the problem of skipping breakfast among the college students and its effects on their academic performances. Some students who do not eat breakfast show negative attitude during the lessons such as unenergetic, dozing off and others. Thus, at the end of the research, this research would like to find out whether there is a difference between the academic result among students who eat breakfast and skip breakfast.1.3 Purpose of study This research aims to investigate the relationship between breakfast and the students’ academic performances.1.4 Research questions 1)Does breakfast affect the student’s academic performance? 2)How does breakfast affect the academic performance?2.0 Literature review2.1 BreakfastBreakfast is the first meal that people take before they start their work or study in a day. (Zilberter &Zilberter, 2014). It is regarded as the most significant meal of the day as a sufficient breakfast enables to ensure an endless supply of energy required by the body throughout the day. (Vishnukumar, Sujirtha and Ramesh, 2017). In this research, the effect of breakfast mainly focuses on how it being related to educational performances.There are several previous types of research showing that there are some bad effects of skipping breakfast on the learning process of students in form of cognitive system which will eventually affect the academic result. (Pollitt, Cueto & Acoby,1998; Arshad& Ahmed,2014; Phillips,2005).According to the research done by Arshad and Ahmed (2014), there are two assumptions being applied whereby the first one is the breakfast plays an important role in providing the nutrients for people especially students who are the respondents in this research in their learning process (Phillips,2005), but the second assumption is breakfast does nothing in providing any use for the learning process. (Dickie & Bender 1982).2.2 Factor of skipping breakfastSkipping breakfast is a bad habit which is practised by some students. There are several possible reasons contributing to the breakfast skipping habit when a person grows up. It means that the higher an age, the higher percentage of the total number of people skipping breakfast. As evidence, Haines, Guilkey, and Popkin (1996) argues that there is a negative relationship between the number of people who eat breakfast and the age. The survey conducted by Siega-Riz, Popkin, and Carsonј€1998ј‰also support this statement. Therefore, based on these two studies, an indication that represents a statistic whereby the frequency of the adults who skip breakfast increases as their age.There are many reasons causing the bad habit of skipping breakfast being practised by students nowadays. One of the reasons is students become more concern about their appearance with age. Some students are not satisfied with their weight even though they have normal weight compared to their body size. A lot of students especially females are afraid of gaining weight, thus they start to try different ways to lose weight to make their body become slimmer for better appearance. One of the ways that think which is efficient is skipping breakfast. (Vishnukumar et al.,2017)Another main reason for skipping breakfast among university students is improper time management. Some university students become less disciplined compared to their high school period because of irregular lesson period and wake up late in the morning (Arshad& Ahmed, 2014; Taha & Rashed, 2017). This causes the students to skip breakfast for not being late to class as they do not realise about the importance of breakfast on their health and learning process. (Vishnukumar et al.,2017) and thus directly eat the mix of breakfast and lunch which we often call it brunch’.The last reason that is highlighted is the social-economy of the students. According to the research done by Vishnukumar et al. (2017), some students skip the breakfast because of their low income of the family as they want to save the money as

In recent years skipping breakfast become an unhealthy habit practiced by the. (2019, Aug 20). Retrieved from https://studymoose.com/in-recent-years-skipping-breakfast-become-an-unhealthy-habit-practiced-by-the-essay 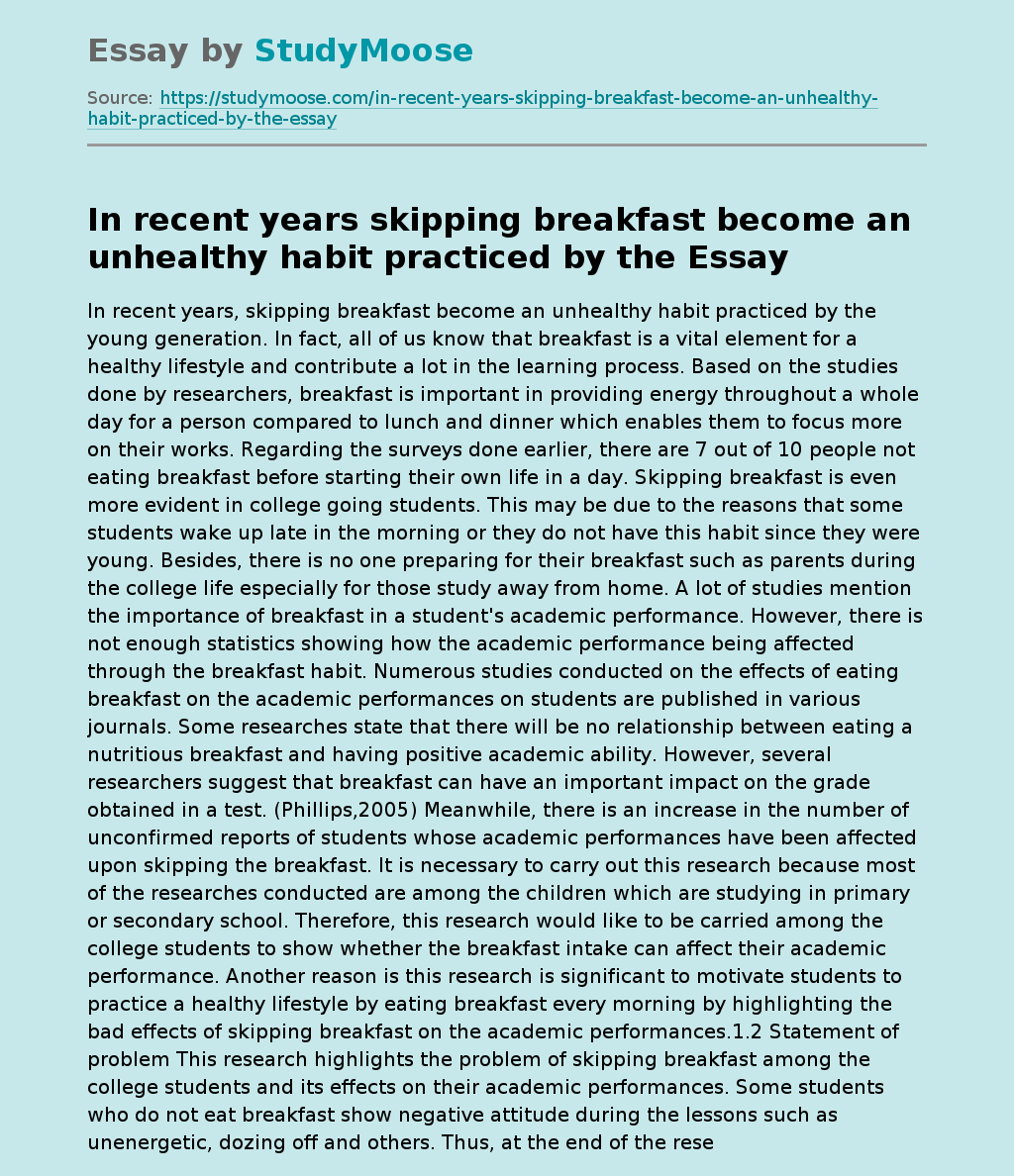