“Worldwide over 1 million people die due to lung cancer each year. It is estimated that cigarette smoking explains almost 90% of lung cancer risk in men and 70 to 80% in women”. (Walser, et al., 2008).An unhealthy lifestyle is one of the major contributors to almost every disease, illness and health issue that we are facing in this country and the whole world today as well. It becomes worse in the Malaysian society. There are several unhealthy lifestyles among Malaysians: bad eating habits, smoking habits and bad social habits.

One of the examples of unhealthy lifestyle among Malaysians is bad eating habits. This kind of bad habit will lead to many bad effects on the individuals themselves. According to Liow (2010), Malaysians tend to get severe ill due to the uncontrollable eating habits. The National Health and Morbidity Survey (2006) found that two out of five people were obese where these numbers have increased three times in a decade or more.

Apart from that, Malaysians also are practically eating at late hours (Liow, 2010). He added that people nowadays love to spend their late night hours at mamak stalls, enjoying their suppers. This is not good because at night, our metabolic rate becomes very low so that it is easy for fat to gather and stuck in our body (Jong, 2010). This will lead to heart attack or other serious diseases. In addition, unhealthy eating habits can also cause diabetes among children. Children nowadays prefer junk food such as Coca Cola, Twisties, and Super Ring which most of them contain excessive flavoring and coloring agents rather than the healthy food.

The children’s bad dietary habits of eating hamburgers, nuggets, fried chicken, fries and carbonated drinks are also one of the contributing factors (Wu, 2010). In meantime, parents also keep feeding their children with junk food due to the lack of awareness about long time effect. Another unhealthy lifestyle among Malaysian is the smoking habit. Smoking is a major problem among youth in Malaysia.

In a recent survey by the Ministry of Youth and Sports on negative behaviors among 5,860 adolescents, 80% indicated that they had ever experienced smoking. What makes smoking a habit? First of all it is a treat for them. Almost two out of three smokers say they just plain enjoy smoking. When smoking is associated with having good times, it can strengthen the habit further. Many other smokers find the rituals involved with smoking calming and satisfying. In general, smoking introduces a holiday spirit into everyday living. It rounds out other forms of enjoyment and makes them one hundred percent satisfactory. They even handle the cigarettes as a way to feel less self-conscious in public. The smokers consider smoking as their tranquiliser to calm them down. The irony is the way they act on the body make them more tense. Nicotine, far from helping relieve stress, may actually cause it. On the other hand, the nicotine in tobacco is actually a stimulant, which can make them feel temporarily more alert.

This explains why many smokers reported that they cannot think or write without a cigarette. It stimulates their mental alertness and be more focused. The smokers also consider smoking as a fix. It is a withdrawal period typically involves both physical symptoms (tiredness, irritability, headaches, anxiety) and an emotional need for the cigarette. All in all smoking is a pointless, wasteful and somewhat dangerous addiction and certainly should not be encouraged. Thus, in order to reduce and eventually eradicate this addiction from society,amoreprogressive plan need to be adopted to achieve the goal. Beside, one of the unhealthy lifestyles among Malaysian is bad social habits. According to department of psychology at the Canadian University of Guelph they have suggested that strong ties associated with better health and longevity Researchers from Brigham Young University reviewed 148 studies that tracked the social habits of more than 300,000 people.

According to Tara Parker (n.d.) they found that people who have strong ties to family, friend or co-worker have a 50 percents lower risk of dying. In one of the most famous experiments on health and social life, Sheldon Cohen at Carnegie Mellon University exposed hundreds of healthy volunteers to the common cold virus, and then quarantined them for several days. Cohen showed that the study participants with more social connections tend to shows positive results such as no depression and good in communication skills. That is, with friends from a variety of social contexts, such as work, sports teams and church were less likely to develop a cold than the more socially isolated study participants. Moreover, people with strong family and social ties will be more active, more likely to seek medical care and have lower stress .In example ,a person with a chronic health problems has more difficulty spending time at work and isolates individuals from reality and hinders communication .

The IPod is one example of gadget that may isolates people from real world. By putting in your ear buds and immersing yourself from the real world. In addition, lack of personal communication due to excessive internet usage can have an overall negative effect on mental and physical health. According to Affonso (n.d.) the internet actually detracts from the communication abilities of society. In conclusion, we have learned some kind of unhealthy lifestyle such as eating late at night, smoking and bad social habits. Based on what has been stated above about the effects of an unhealthy lifestyle, we must take a good care of your health because you are what you eat.The healthiness of food and drink choices undoubtedly influences the shape one’s body is in. Other than that, exercise also helps to circulate the blood and keep the physical condition of the body parts intact. So there’s no excuse for someone not taking care of their health properly.

The Detrimental Effects of Smoking. (n.d). Retrieved
August 3, 2012, from http://naturalsociety.com/the-detrimental-effects-of-smoking/ 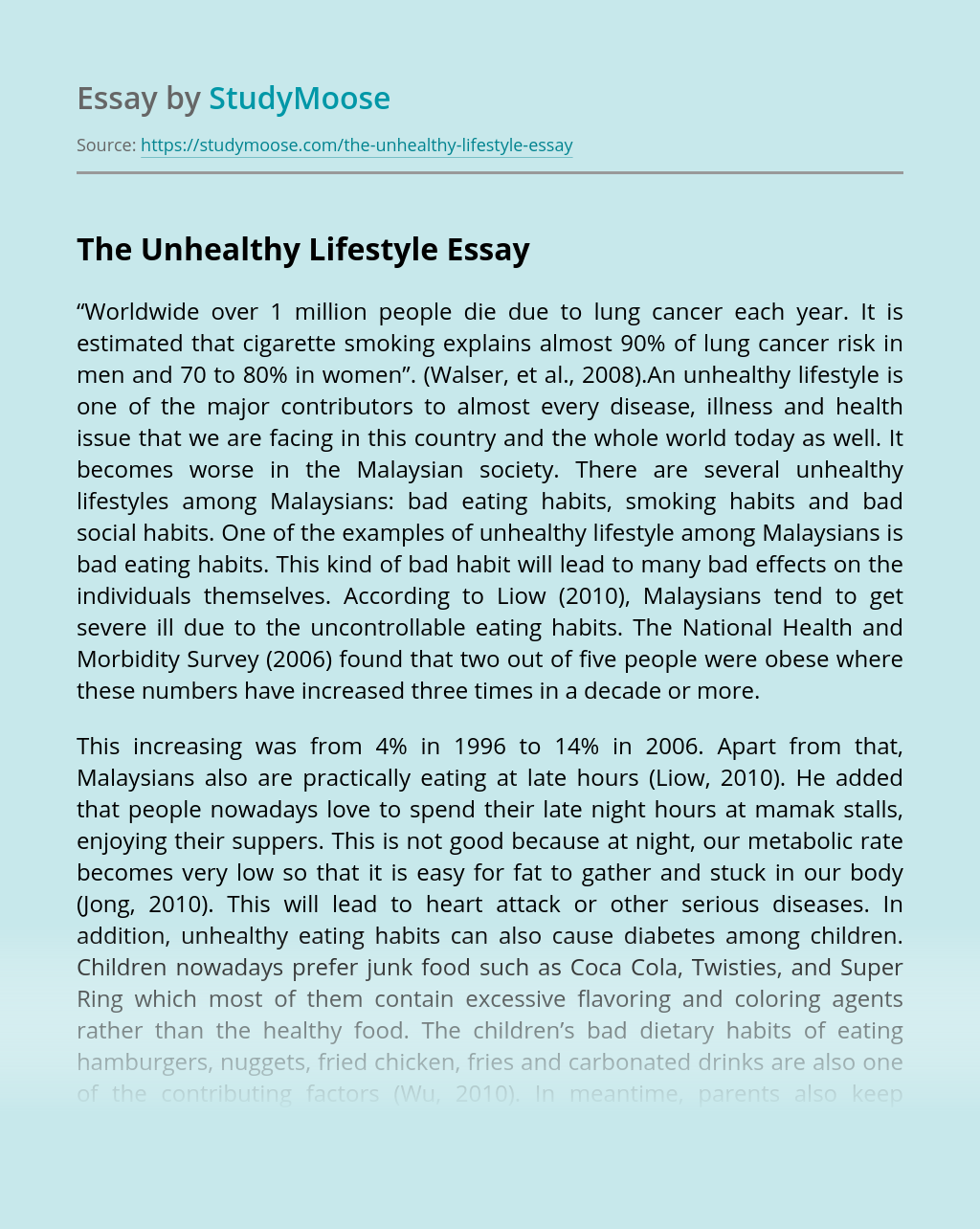 Don’t waste time
Get a verified writer to help you with The Unhealthy Lifestyle
Hire verified writer
$35.80 for a 2-page paper
Stay Safe, Stay Original