Hide and seek by Vernon Scannell

‘Hide and seek’ by Vernon Scannell is about a young, excitable infant playing the childhood game of hide and seek.

It begins by revealing the juvenile excitement experienced by a child when playing a game – ‘Call out. Call loud: I’m ready! Come and find me!’ Through the poets use of exclamation marks we can see the child’s joy at partaking in the game. It is exhilarating and fun time for the child, but it is also very competitive. The manner in which he hides shows this competitiveness; he meticulously hides under dirty sacking in the garden shed and makes sure that his feet aren’t ‘sticking out’ .

Also when his friends are seeking him, they are portrayed as ‘prowling in’, and ‘whispering at the door’. This further intensifies the degree of competitiveness within the game.

However he is determined to win the game, and after a lengthy space of time he thinks, ‘It is time to let them know that you’re the winner’.

By know the child is supremely confident that he has emerged the victor, however it only exaggerates his betrayal and feeling of abandonment when he finds out the truth.

Finally when the boy victoriously emerges from his hiding place, and shouts ‘I’ve won, I’ve won! Here I am!’ he is greeted by a scene of nothingness -‘The darkening garden watches. Nothing stirs’. His childish dreams of a grand procession in his honour are dashed immediately, and we begin to sympathise with the boy as he tragically realises that he has been betrayed and deserted by his friends.

The most important theme explored in ‘Hide and seek’ is the individual status of one human being. The poem asks the contentious question, how much do we really matter? The poet divulges into this topic and comes to the conclusion that we are not individually important in the wider scheme of things than we think.

‘Half-past Two’ by U.A. Fanthorpe concentrates more on the idea of time and the ways in which it governs society. The poem revolves around a child being punished for doing ‘Something Very Wrong’. The use of capital letters gives the impression that the act committed must have something very serious, and also describes the angered tone of voice that the teacher may have used when admonishing him. However the next line contrasts sharply with these thoughts by saying – ‘(I forget what it was)’.

The punishment given by the teacher is to make him stay in the ‘schoolroom till half-past two’. However, the words ‘half-past two’ are meaningless to the boy because ‘She hadn’t taught him Time’, and he was too scared to remind her of that. The boy is always respectful towards the teacher, and their social difference is exaggerated by the capital letter at the beginning of the word ‘She’. The teacher is perceived as a god-like figure to the boy, who has no power or say in any of her imperatives. The unfortunate boy has no comprehension of time and therefore ‘half-past two’ is double-dutch to him. The boy’s definition of time comes from aspects of his own family life – ‘Timeformykisstime’, ‘Gettinguptime’ and ‘TVtime’. The child, although not pre-linguistic, is not practiced in the use of regular time and hence must use time by thinking of things connected with it.

His compound ‘time-words’ shows his inability to associate with the ‘alien’ abstract time that the adults in his environment repeatedly use. As a result, he does not know when it is time for him to leave the schoolroom to return home. This causes him to forget that time exists, and he begins to dream about the ‘smell of old chrysanthemums’ and ‘the air outside the window’. This is a typical example of an epiphany, where the boy becomes unimpeded by the constraints of time, shown by the use of the words ‘into ever.’ He is liberated by the bounds of time for a short while, that is until his startled teacher returns to find him still there. The teacher is profusely apologetic and tells him that he can go home.

The ensuing stanza is probably the most important – ‘And he never forgot how once by not knowing time/He escaped into the clockless land of ever/ Where time hides tick-less waiting to be born. A feeling of reminiscence is shown by the use of the words ‘he never forgot.’ The ending is particularly affirmative as it shows the happiness felt by the boy as his imagination runs wild and he eludes time into the ‘clockless land of ever.’

The most pertinent theme explored in ‘Half-past Two’ is that of time, and the way it governs our lives. The poem is articulates the adversities of time and contrasts it with the liberty and bliss experienced by the boy when he was freed from time. The cruel aspect is that all human beings eventually run out of time; we get old, lonely and eventually die due to time.

Isolation is a major theme within both poems because it affects both boys concerned in a different but dominant way. The child in ‘Hide and Seek’ is purposefully forgotten and is left alone to his own senses: ‘floor is cold’. Isolation is a key element in ‘Half-past two’ because the child in question is forgotten about in detention and he begins to reverie in his own world. It is a more commanding theme in ‘Hide and Seek’ because of the harsh nature in which the boy is abandoned.

One of the most foremost similarities in themes between the two poems is that they both concentrate profoundly on greater social forces. This is seen by the use of the words ‘She’ in ‘Half-past two’ and ‘They’ in ‘Hide and Seek’. The boy in ‘Half-past two’ is completely controlled by his authoritative teacher; and one may argue that the ‘prowling’ and ‘whispering’ are quite threatening thus causing the boy to hide because of his fear of society, not simply because he is playing a game.

Time is a comparable theme explored in both poems, but more so in ‘Half-past two’. In ‘Hide and Seek’, time symbolically passes to show the transition of friendship to loneliness; and ‘Hide and Seek’ discusses how the world is restrained by the limits of time.

Hide and seek by Vernon Scannell. (2016, Jul 19). Retrieved from http://studymoose.com/hide-and-seek-by-vernon-scannell-essay 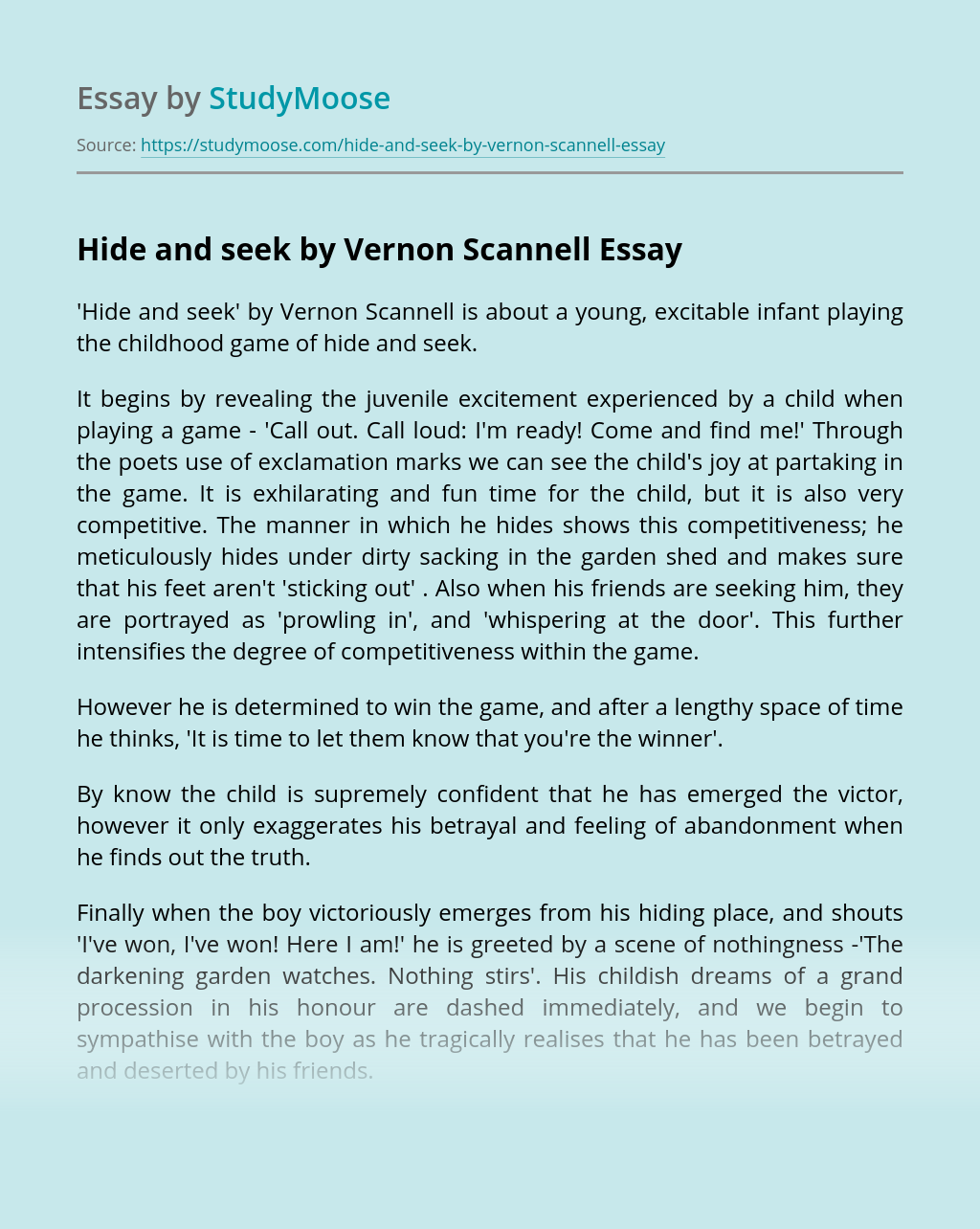 Don’t waste time
Get a verified writer to help you with Hide and seek by Vernon Scannell
Hire verified writer
$35.80 for a 2-page paper
Stay Safe, Stay Original