Hemingway’s and Vonnegut’s traumatic experience stems from their personal ordeal with war and death. In his 1918 letter Hemingway wrote that he had been “shelled by high explosive, shrapnel and gas, shot at by trench mortals, snipers and machine guns” and even though he has never had a hand grenade thrown at him, it would only be “added attraction” to his 227 wound collection should he “get a hand grenade later” . Hemingway’s nonchalant description of his wounding instigates a feature of discordance between the language of the letter and its content.

Don't use plagiarized sources. Get your custom essay on
“ Hemingway’s and Vonnegut’s traumatic experience at war ”
Get custom paper
NEW! smart matching with writer

Vonnegut’s 1945 letter announces his family that his division had been “cut off from the rest of Hodge’s First Army” . After having realized that “bayonets aren’t much good against tanks” , his division, or what was left of it, surrendered and was transported to a P.O.W. Camp in box cars “covered with fresh cow dung” . During their journey to the camp, nearly 150 soldiers had been massacred by air bombing, many died out of starvation and thirst, and two were shot for stealing food.

On February 14th, “Dresden – possibly the world’s most beautiful city” and 250,000 of its inhabitants were wiped off the face of the earth. Another fourteen of Vonnegut’s comrades had been killed by further bombing intending to “mopping up isolated outlaw resistance” . Having survived against all odds, Vonnegut was flown to a repatriation camp where he was “wonderfully well fed and entertained” . In his letter, Vonnegut emphasizes his extraordinary survival by the reiteration of the phrase “but not me” .

The aforementioned personal letters not only bear resemblence to the novels’ scenarios, but the instrumentation of language is what is resurfaces in the two novels, thus there exists a connection between the individual experience of trauma and its literary emergence in the narratives. Although the two letters outline similar bloodcurling experiences, their contents already differ in linguistic expressions, ranging from Hemingway’s strikingly composed and unflappable recount of his severe injuries to Vonnegut’s sardonic and whimsical commentaries on his numerous near-death experiences. The very traumatizing act of survival is what tailored the distorted dimension of language from the early stage of its occurence, as the “direct link between the psyche and external violence” has already been provided and all that remains is for the trope of trauma to unfold into an “endless testimony” .

According to Caruth’s theory of trauma, the paradox of the “impossibility of living” is what constitutes the core of trauma which lies beyond rational representation and which “opens up and challenges us to a new kind of listening, the witnessing, precisely, of impossibility” . The experience of trauma serves as a formulating agent of language, the structure of which adjusts to the linguistic manifestation of trauma in the narrative. Caruth states that language takes up the responsibility and challenge of transmitting the belated reverberation of the traumatic event:

The pathology cannot be defined either by the event itself which may or may not be catastrophic, and may not traumatize everyone equally nor can it be defined in terms of a distortion of the event, achieving its haunting power as a result of distorting personal significances attached to it. The pathology consists, rather, solely in the structure of experience or reception: the event is not assimilated or experienced fully at the time, but only belatedly, in its repeated possession of the one who experiences it.

The damage caused by trauma does not depend on the size of the calamity, nor the manner of its implementation, but is rather conditioned by its individual perception of the victim, thus its expression will remain individual and singular. Since no victim apprehends trauma identically, the divergent linguistic manner of conveying traumatic experience by Hemingway and Vonnegut is thus validated in their semi-autobiographical war novels.

Caruth’s theory of absenteeism is valid for both novels, although distinctively. Frederic encounters trauma through his experience of getting wounded. The wound causes the disjunction between body and mind, as Frederic himself admits that he felt his self “rush bodily out of” itself. Frederic fails to be consciously present during his wounding, thus trauma will constitute the ensuing desire for it to perpetually recounted until it is fully comprehended. Throughout the novel, the protagonist experiences a shift in perspective concerning the self and its psychological trajectory. For Frederic, trauma will represent his acumen of the dynamism between his body and mind. Contrary to the primitive corporality known to Frederic, his psychological evolution makes him realize “it was not your body any more” . By understanding that his “head was mine, but not to use, not to think with, only to remember” , Frederic is able to differentiate the dissonance caused by the wound. The awakening process Frederic goes through is triggered by the external factor of trauma in the shape of the wound and culminates in Frederic’s self-knowledge of repetitive inner thoughts and feelings, such as guilt, desolation and eventually grief. Through scant language, steadily, the reader gets to know the protagonists emotions and feelings only for them to be finally smothered in Frederic’s mind as he bids farewell to the “statue” of his love.

As opposed to Frederic, Billy’s traumatizing experience of war is mirrored in the overall structure of the novel, which is based on the breach in chronology. Vonnegut’s fictionalized novel is an “example of what psychoanalysis would call a ‘displacement exercise’, a way of confronting something traumatic in an indirect way which protects the psyche from unbearable material” . By dispatching Billy to an alien planet, Vonnegut creates a point of reference for the reader to reflect upon in contrast with planet Earth. His time travelling utterly embodies the prerequisite of the recurrence of trauma which “becomes the basis of the repetition of the nightmare” as stated by Caruth. Billy does not exhibit a similar evolution of the self as does Frederic, as the non-linear chronology of the novel does not facilitate a linear observation of Billy’s experience with trauma, but it does allow for a panoramic monitoring of the trigger for the trauma, which is the witnessing of the bombing of Dresden. Caruth’s concept of the traumatic landscape being revisited perpetually is substantiated by Billy’s jumps in time. Vees-Gulani also states that Billy’s journeys “seem more the result of a vivid imagination that he uses as a sense-making tool to deal with his war trauma” . Hence, the protagonist’s erratic journeys become the summation of traumatic memories which are not to be made sense of as rational conceptions, but are to be viewed as the means of coping with trauma.

Paradoxically, Caruth points out that even though trauma precipitates a breach in understanding, alternatively it allows for new forms of understanding. The literature of trauma brings about different modes for the grasping and manifestation of the traumatic landscape of war expressed astutely through language. The war novel “challenges its readers to interrogate the commonsense and commonplace assumptions” which, in the case of A Farewell to Arms and Slaughterhouse-Five, the narrative does not directly expose a moral and ethical argument, but it rather offers access to a sensible literature which portrays the trauma of war through non-mimetic and striking linguistic techniques. 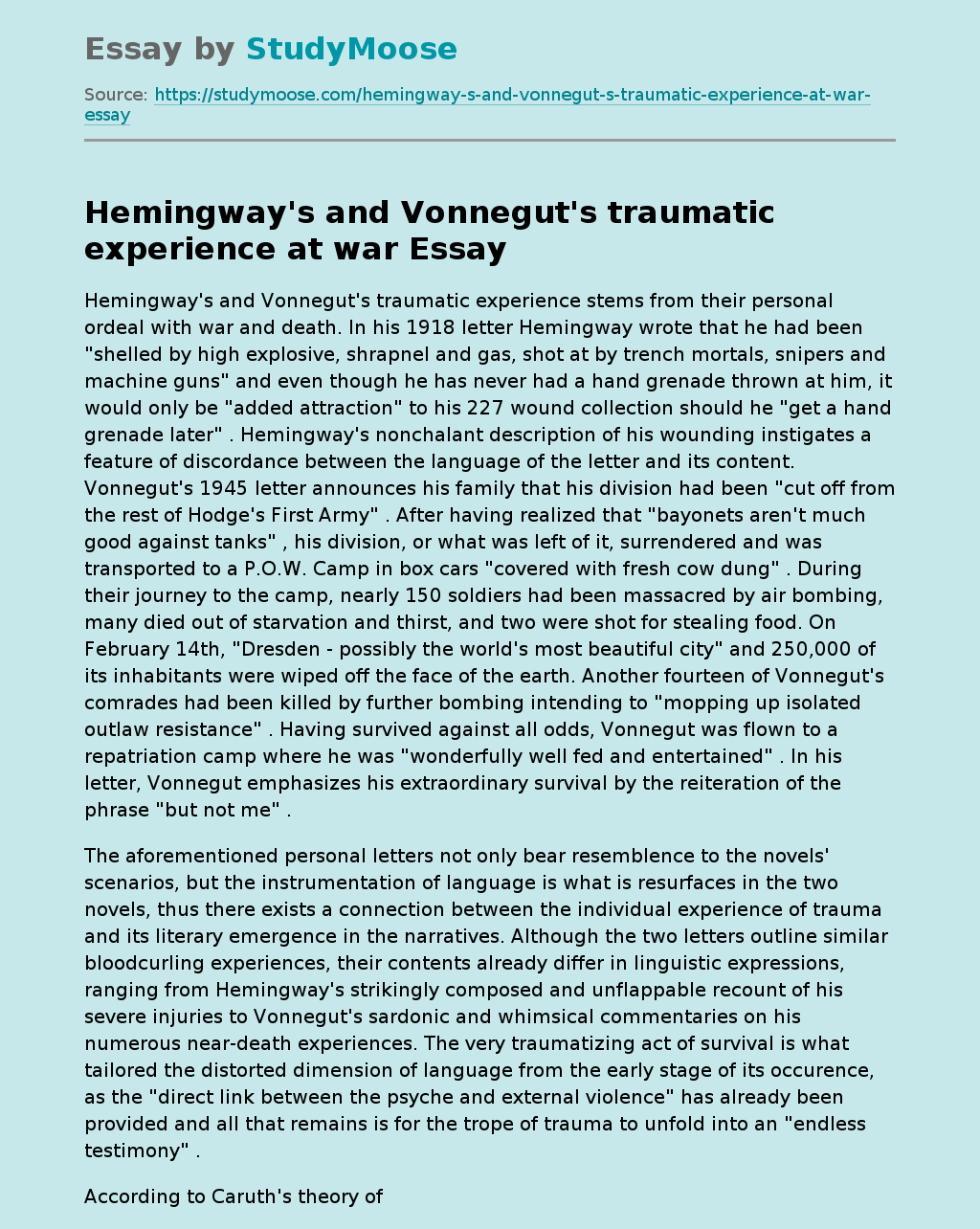