Has the Role of the Prime Minister Become More Presidential?

Does the role of the PM become more presidential? Firstly, Prime Minister is the leader of his party in the House of Commons and the head of the government.

Don't use plagiarized sources. Get your custom essay on
“ Has the Role of the Prime Minister Become More Presidential? ”
Get custom paper
NEW! smart matching with writer

However, in fact, the Prime Minister has come to be, not legally the Head of State, the leader of the nation, irrespective of party allegiance. It means that in time of difficulty, emergency or crisis such as war or terrorist threats, the country can unite behind its head of government. Although the Head of State is held by the monarch, but it is just ceremonial.

The true power lies on the Prime Minister. It can be argued that there has been a long term seeing the prime minister of the day rather than the monarch as national leader. Moreover, the undoubted growth in the important of foreign and military affairs has contributed to a presidential ‘feel’ for the office of the Prime Minister. When the Head of Government has to negotiate with foreign powers, attend international conferences, negotiate treaties, conduct wars and meet visiting dignitaries, he is bound to appear presidential. In large conference he will be seen rubbing shoulders with the president of France or USA who represent their countries on these occasions.

For example: Margaret Thatcher with Ronald Reagan, Tony Blair with Bill Clinton and George Bush. All forged close links with the US president. Media plays a very important role in the change of role of the Prime Minister.

It is the proliferation of news and current affairs of programme, the arrival of 24-hours news, and the use of technology which allowed instant reporting from anywhere in the world. The growing importance of the media in politics has contributed to the greater concentration on the individual holder of the office of the prime minister rather than the government as a whole. He have a large group of advisers whole sole task of change media image of their master to control the flow of information coming out of Downing Street. As a result, the public come to see government in term of its leading member rather than as a collection of Minister and MPs. The media also contribute to the relationship between the Prime Minister and the President. For example: it makes the foreign office force of Margaret Thatcher become clearer. She had a close contact with Ronald Reagan – the US President. With the help of media, throughout the world, she becomes the government.

Ms Thatcher and her advisers carefully cultivated her image as a national leader, at time above, and distinct from the government. It could be said that the Prime Minister now has an extensive network of personal advisers, think tanks, policy units and working groups that serve him alone and are not available to the rest of the government unless he wants them to be so. If the President has his own staff in White House and large executive office, the prime minister has his own ‘government department’ in Downing Street. This is a body known as the ‘cabinet office’. It existed to serve the whole cabinet and did not directly involve with policy making. However, since 1960, it is mainly used to serve the Prime Minister alone. It becomes far more concerned with policy development.

This enables the prime minister to play a pivotal role and so appear to be dominating government. Effectively, the prime minister has an establishment of several hundred advisers who work directly or indirectly, for him. For example, when Tony Blair was elected in 1997, the Prime Minister’s Staff was doubled during the first two years of the Blair premiership. Not only does this suggest that the premiers position has been strengthened, it also points to the emergence of a ‘Prime Minister department’. fact, there is a concept which calls ‘spatial leadership’. This is a theory of prime ministerial power. It suggests that political systems are increasingly led by the leaders who consider themselves to be separate from the rest of the government.

This makes the Prime Minister become more presidential because the Presidents are elected separately from the rest of the government and therefore have a different source of authority and are accountable directly to the people. The Prime Minister, therefore, becomes more dominant with the office holder to see himself as separate from the government. Moreover, to some extent, he has his own mandate directly from the people. However, the office of Prime Minister is the most flexible one. It is what the holder wishes to make of it. Some Prime Minister will seek to dominate while the others will be either unable or unwilling to do so. The actual powers and limitations of the office have not changed a great deal in modern times. For example, there are two very dominant individuals – Thatcher and Blair – who have able to squeeze as much power from the office as possible. The weaker premiership like John Major and James Callaghan prove that presidential style is not inevitable. It is basically, the dominant role of prime minister constantly ebbs and flows.

The ability of the prime minister would decide how their power will be dominant in the office department. Another point is that the Prime Minister lacks of the absolute power to become a true president. There are many importance forces that will rein his power. Although the prime ministers now seem to be more presidential but in fact they are subject to the same constraints that have always existed. The prime minister does not have power to do what they want. If there is any policy that can not be passed by the cabinet, the prime minister will not lose his job until his period end. His cabinet and his own party leadership have force to rein their leader’s power. For example: Margaret Thatcher was ultimately reined in by her own party leadership when she attempted to implement a policy against their wishes.

There is also an analysis which is the ‘elastic’ theory. It suggests that, as a prime minister tries to stretch the power of the office further and further, the force constraint becomes increasingly strong. There is another example about Margaret Thatcher who gained increasing numbers of enemies as she sought to exercise more and more control. Eventually the enemies turned on her when they felt they had enough strength to remove her. The final point is the prime minister has no right to presidential status. The experience of Gordon Brown is a clear evidence for this point. Brown suffered charge that he had never faced the electorate as prime minister and perhaps above all, he was unfortunate enough to preside over the devastating credit crunch and the economic recession that followed it.

We can say that Brown is the classic modern example of a prime minister whose power was destroyed by world events, some were beyond his control. In conclusion, I would argue that the prime minister can choose to become more presidential because all depend on his ability and power. If he can exploit and apply efficiently his office department, he can dominant his power. However, the power of the prime minister constantly ebbs and flows, the presidential style is not inevitable. Moreover, there are also many force from the party leadership can rein the prime minister’s power and the constraint can remove him.

Has the Role of the Prime Minister Become More Presidential?. (2016, Nov 25). Retrieved from https://studymoose.com/has-the-role-of-the-prime-minister-become-more-presidential-essay 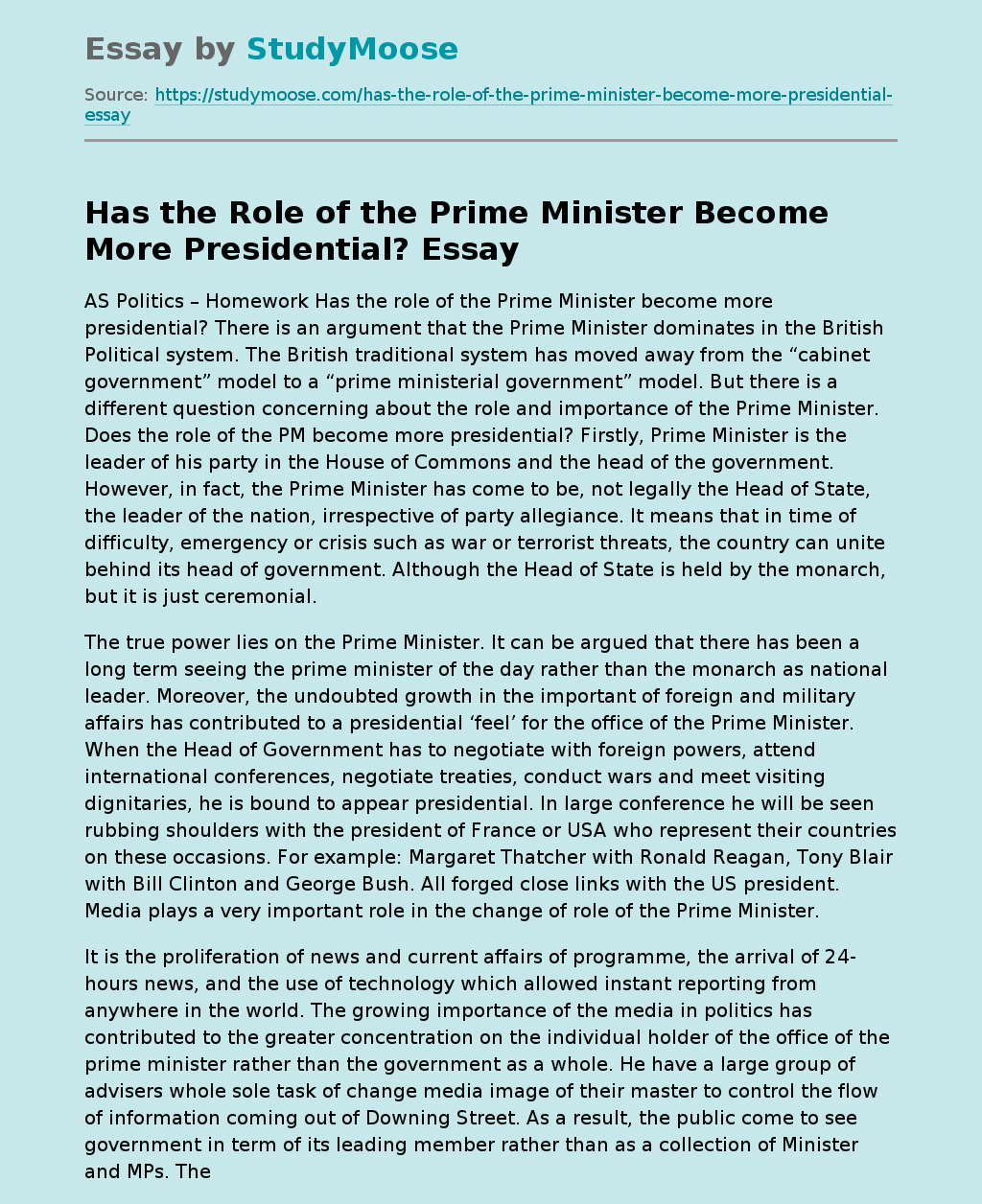