If I Were Elected as the Prime Minister of India

If I were the Prime Minister of India, what would I do to make India a super power by 2020? “where the mind is without fear and the head is held high… Into that heaven of freedom, my father, let my country awake”. Tagore and so many other leaders of our country envisioned an India far better than what we have made it today. Easy though it may be for us to blame it on the ‘corrupt political leaders’ or the ‘useless government’, the truth lies in the fact that they are also one of us.

Don't use plagiarized sources. Get your custom essay on
“ If I Were Elected as the Prime Minister of India ”
Get custom paper
NEW! smart matching with writer

we have elected them. if we point a finger at them, we would be pointing 3 fingers back at ourselves. e say we cannot change the system.

What we don’t realize is that we don’t need to change the system, we need to change ourselves. we need to ask ourselves what we have done for the country and get positive answers. India is our country too not just the politicians and we must contribute towards building a better India, one envisioned by Tagore, by Gandhi, by us.

To most of us, this is developed India as we believe that no more development can be brought about what with the population explosion, the corruption and the poverty. Instead of spreading awareness regarding population control, reporting the acts of corruption or spreading literacy to help poverty ridden people secure a minimum standard of living, we choowe to just sit back and criticize about the laws of the land.

we have learned to resign and do nothing and have become fully convinced that India is in a hopeless situation and can’t be helped. But that is only because we have chosen to adopt the easy way rather than the right way.

It’s high time that we woke up and realize the consequence for our decisions will ultimately harm or benefit us. Mr. S. Saravana, 26 years, diploma holder in electronics and communication engineering living in a small district of Mittur, has taken up the responsibility of spreading education. He and his teacher Mr. Munirthinam have picked out 40 senior secondayy school students who are above average but need proper coaching for future courses. Inspired by 87 articles written by Dayanand Saraswati, Saravana has taken unto himself the vow of making 10 doctors and 10 engineers, by giving proper coaching, before dying.

In Hyderabad, Ajai Gosh, 37 years, has been a painter for ten years. He had not received any primary education and thus has spent almost his entire income of ten years on children’s education to ensure that they get the basic knowledge and do not suffer like him. These men chose to make a difference and however little, they did it. There was once a man walking on the beach during low tide when he saw another man who was picking up the millions of shellfish one-by-one and throwing them back into the ocean. He said to the other man, “Are you crazy? Its low tide. There are millions of shellfish on the shore. You can’t possibly

If I Were Elected as the Prime Minister of India. (2016, Nov 23). Retrieved from http://studymoose.com/if-i-were-elected-as-the-prime-minister-of-india-essay 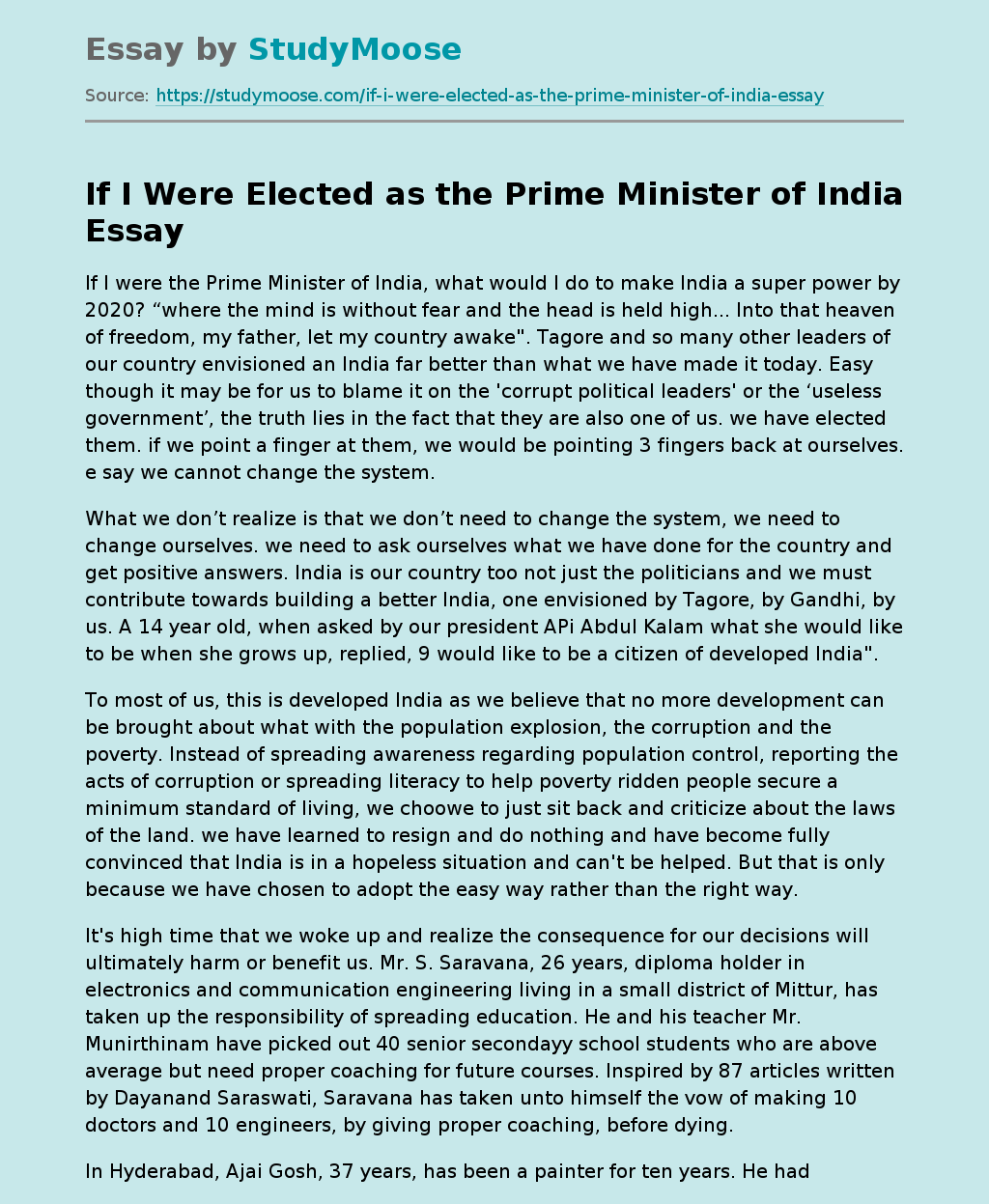