has formed her subjectivity her identity her place which

has formed her subjectivity, her identity, her place which gets substantiated when she says

“We’d seen so much of her and ourselves in the people we’d met. We belonged, now.”

Don't use plagiarized sources. Get your custom essay on
“ has formed her subjectivity her identity her place which ”
Get custom paper
NEW! smart matching with writer

Aboriginals are not supposed to bring up the children of non-aboriginal fathers. Part-aboriginal children were bound to be interned at the government settlements if not put into the care of missionaries. The settlements became dumping grounds for illegitimate part-aboriginal children compulsorily separated from their parents. These settlements became places of misery, looked upon with horror and dread by all aborigines in Western Australia. Therefore it is obvious that Nan’s fears were real, even though inconceivable to the young Sally Morgan who knew nothing about the buried colonial politics.

These circumstances and background mentioned above helps us now understand why Morgan and family suppressed their aboriginal background.

It is due to the direct and indirect effects of these policies, Gladys and Nan deny their children knowledge of their aboriginal backgrounds. If the children knew and a word got out, the family might be torn apart. As mothers they feared that their children might suffer the same fate as Arthur, Daisy and Gladys, all of whom had been uprooted and exploited by whites for no other reason than they were Aboriginal.

Morgan’s My Place maps her family’s attempt to recover and celebrate their Aboriginal identity against the official white version of Australian history and as such, is usefully thought about as a form of counter history. Thus the contrast between speaking out and remaining silent becomes an underlying structure of the book. In writing her personal history Morgan is also writing the history of untold numbers of Aboriginal families in the years covered by the book. To some extent, Morgan is writing within the conventions of the traditional European genre of autobiography, but it is important to think about the ways in which her individual story becomes collective story-telling or communal history.

Many critics have called My Place detective story, and one can understand why this analogy readily comes to mind, because the book is written in such a way that the reader shares the author’s quest for the truth about her ancestors, We eagerly wait for clues, and struggle to assess the different accounts, for examples, of who fathered the author’s mother and grandmother. Was it Jack Grime, Maltese Sam or Howden Drake Brockman? With the development of the story this fact-finding mission becomes a spiritual and psychological search for wholeness. At Corunna Downs she discovers “her place”, that is to say, her place within her extended family and with her grandmother’s country. This place is simultaneously “our place” and the shift to the plural possessive pronoun announces that the autobiographical account of growth and self- knowledge is to be read as joined to the liberation of the race, or at least the family. Through this journey an aboriginal attains consciousness. This book suggests that by affirming her aboriginal heritage, Sally finds psychic health and spiritual wholeness. Indeed the act of writing the book is represented as a healing process, both for herself and her extended family. David McCooey, in his essay “Autobiography”, remarks:

“Morgan, somewhat controversially, does evoke non-Indegenous autobiographical traditions in her account of discovering her indigenous heritage. Her multivocal work – in which Morgan’s Aboriginal identity is uncovered in the narrating of family history – uses the quest motif and elements of detective fiction to dramatise the process of discovery.” (Pierce 333).

As executed here, indigenous autobiography tends to avoid common patterns of Western autobiography which emphasizes individual development. Here in the novel Sally’s identity gets solidified along with the establishment of the newly found identities of her mother, grandmother and grandfather. Sally’s narrative frames and assimilates Aboriginal voices. This succession of voices traces a songline into the realm of indigenous history. The ‘true’ journey into the dark, repressed side of her family history starts off with Sally’s account, then Arthur’s, next Glady’s and finally Daisy’s, as silences are slowly unravelled and take readers into other understandings of the world. What personal data Sally delves towards the second half of the book only serve to pave the way for the emergence of Aboriginal voices.

has formed her subjectivity her identity her place which. (2019, Dec 10). Retrieved from http://studymoose.com/has-formed-her-subjectivity-her-identity-her-place-which-example-essay 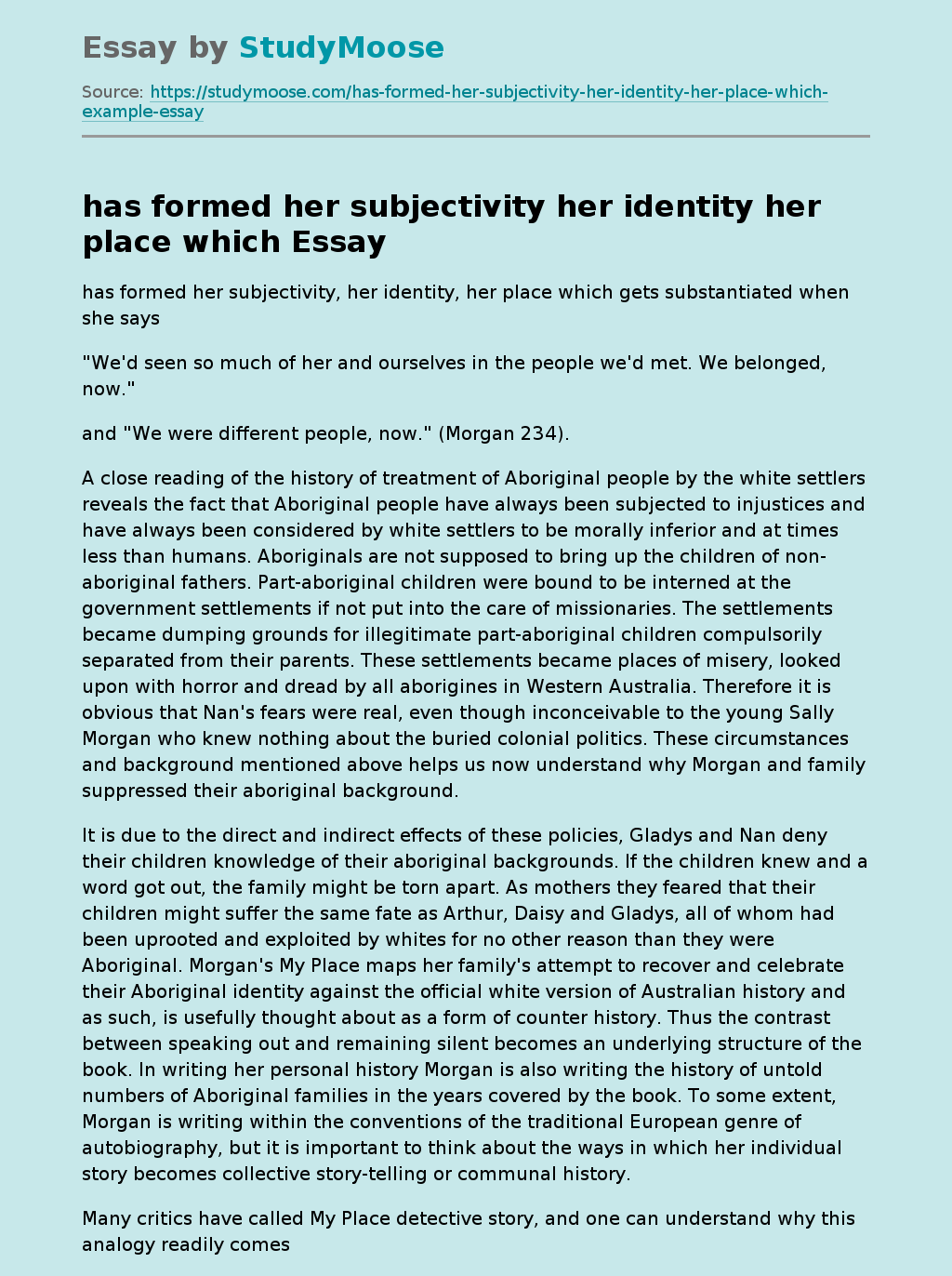